A Fistful Of Questions With Andre Almaraz Of Pale Horseman 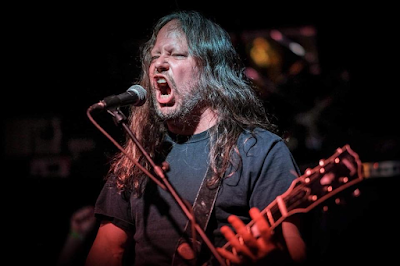 Guitarist.  Beer Enthusiast.  New vocalist of Metallica!?!?  This edition of Fistful of Questions goes out to Andre Almaraz of Pale Horseman.

In high school, I was known as “AWOL.”  People I talk to from back then might still call me that from time to time.  About 10 years ago, I used to do album reviews for a couple different webzines.  During this time, my pen name was “A. Flesh.”  Nowadays, some people will call me “Dre” for short from time to time, but not many.

I am actively involved with only one band; Pale Horseman.

The first drummer I ever jammed with was a kid named R.J. who lived across the street from my grandparents’ house.  I was probably right around 13 years old.  We jammed together as a two piece in his parents’ basement for a while.  The first song I ever wrote was with him.  That was probably 1984.

The first band I was in was called Chernobyl Victims.  The band existed when I was a freshman/sophomore in High School and it was during the time when the Chernobyl Nuclear Disaster of 1986 happened, in the area that is now known as Ukraine.  We were a three piece metal band playing covers by Metallica, C.O.C., Venom, Slayer, etc.

Tell me about the genesis of Pale Horseman.

Eric Ondo (guitars/vocals), Rich Cygan (bass), and myself (Andre Almaraz - guitars/vocals), have all been good friends since the mid 1990's and we have been in several bands together since then.  By the time Pale Horseman officially formed in 2011, there was no period of getting to know each other on a personal or musical level at all.  Jason Schryver (drums) came to us several years later in 2016 but we have so much in common with him and we all get along so well that it's as if he's been with us from the start. 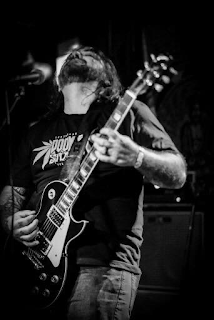 What inspired the name Pale Horseman?

The name was inspired by the biblical prophecy of the four horsemen of the apocalypse from the book of Revelation.  Revelation is the last book of the bible and basically describes how the world will end.  “And I looked, and behold a pale horse: and his name that sat on him was Death, and Hell followed with him. And power was given unto them over the fourth part of the earth, to kill with sword, and with hunger, and with death, and with the beasts of the earth.”

How long did it take you to write and record your tracks for the split you did with Buzzherd?

We tracked the drums and rhythm guitars in 2 full days.  Then we came back for another full day to finish guitars and bass.  Then we did a few half days to finish up vocals and guitar harmonies, guitar solos, edits, etc.  Probably about a month or two overall.  I think one or two of us had covid exposure during that time so things were delayed a bit.  We weren’t in any rush, regardless.

I would join Metallica as lead vocalist for several reasons;  I would be a millionaire.  I would be a member of the biggest metal band in history.  I can sing all their songs.  Over the years, James’ voice and vocal style has become a caricature of what it used to be.  I would keep James on as rhythm guitarist/songwriter.  He just wouldn’t be allowed near a microphone, not even for backing vocals.

Yes, several.  If I have to pick one, I will go with “Body Dome Light” by GODFLESH.  I love everything about that song.

Robert Conti is an amazing jazz guitarist and a favorite of mine.

I’ve often thought about doing “Dear Prudence” by The Beatles.

Reggies in Chicago.  Great venue, great people, great food, great craft beer, great liquor selection, and the talent buyer there is a true gentleman.  The owner is a great guy too.

Nothing specific.  I just try to show up on time, load in, set up the merch, and start drinking. 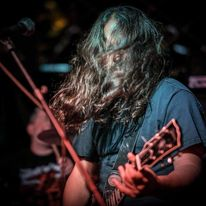 Dealing with bands who have what I would consider to be “bad live show etiquette.”

I don’t have extensive touring experience but I’ll say Chicago wins, regardless.

I once saw a guy in the pit with an entire pizza.

I was living in my first apartment in Lemont, Illinois (U.S.A) and listening to “Songs Of Love And Hate” by GODFLESH.

If you’re doing this as a business endeavor to earn a living, you have a long, hard road ahead of you.

I would call it Chicago Sludge Fest.  The three bands would be GODFLESH, Hooded Menace, and With The Dead. 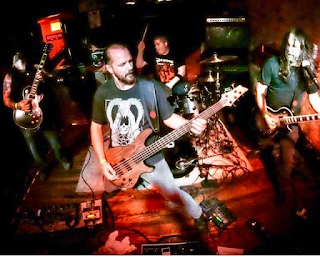 About 30 years ago I lived in a mobile home and the furnace went out during the coldest part of winter.  I probably went about 4 - 5 days without bathing a few times during that period, between showering at the homes of friends for the few weeks the furnace was out.

My middle name is Miguel.

“Culling The Herd” by Buzzherd.

I couldn’t name a song by Taylor Swift if my life depended on it.

High on Fire or Clutch (if you had to choose)?

High On Fire by a mile.

Boobies by a mile.

Star Wars by a mile.

My newest Mare shirt; it’s black on black and very rare since the band only existed for a short time and has not done many shows.  For those who may not know, Mare was an amazing sludge band from Canada who only had one EP release in 2004. 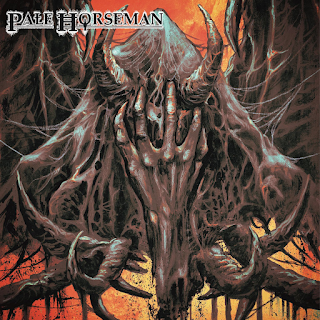 I haven’t read many books but I’ll have to go with “Sound Of The Beast: The complete Headbanging History Of Heavy Metal” by Ian Christe.

Massive thanks to Andre for taking the time to answer my questions. I appreciate it.  If you are looking for a sweet slice of vinyl and some crushing sounds (and why wouldn’t you be?) then you should absolutely get your hands on the split that Pale Horseman did with Buzzherd.  Click on over courtesy of the link below and grab yourself a copy or two.  You’ll immediately be the envy of all your friends.