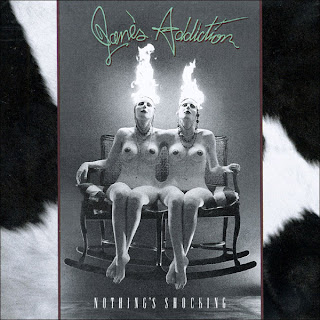 Growing up as a teenager in the 1980’s I’d say my progression through rock and roll was fairly standard. Status Quo were my gateway band that drew me into a world of distorted guitars and hard assed rhythms. From there it had to be harder and heavier…Quo gave way to Maiden who gave way to Venom, who gave way to Mercyful Fate then to Metallica, Slayer, Bay Area thrash, death metal…etc. I also embraced the pantheon of forebears…Sabbath always did rule the roost for me from one summer’s day in ’83 when I heard “Live Evil” and still do to this day as do the classics like Lizzy, Purple, Skynyrd, Led Zep, ZZ Top, AC/DC, Motorhead, Kiss. I was a typical heavy metal teenager.

Metal was always what it was…hard, heavy, escapist…etc but towards the end of the decade there was a shift; the Red Hot Chilli Peppers introduced metallers to funk, The Beastie Boys and Run DMC with Aerosmith introduced metallers to rap, Faith No More introduced metallers to funk and rap and then there was Jane’s Addiction! Jane’s Addiction were something else entirely. At first it was the pictures in magazines like Kerrang! Don’t forget, in the UK we only had one rock radio show late on a Friday night, no rock TV to speak of and only a small handful of magazines which we scoured with a magnifying glass on a monthly basis to find new bands. I was drawn in by the pictures. Here was a band that looked like no other. They kind of looked like chicks but not like those confused LA dudes who all looked like drunken slut aunties but sang about how much pussy they wanted. No Jane’s Addiction had this whole androgynous thing going on…kind of weird, and weird was good. Then there were the reviews that in one breath would mention thrash metal, psychedelia, funk, indie…etc. So, er, what the fuck does this band sound like? Then there was the album cover, two naked conjoined women with their heads on fire!!! What, no demons? No chicks in chains? My young mind was unprepared for such shifts in what had, up to that point, been a fairly consistent metal rule book but I knew I must embrace it. I bought the album, I hadn’t heard it…I hadn’t heard a note these guys played, but I bought the album. Due to the potentially offensive nature of the cover (this was the age of the PMRC) it came in a plain black, plastic, ribbed sleeves with the apparently offensive sleeve inside. I didn’t find it offensive, I didn’t find it titillating or erotic…I just found it beautiful. It was art and at that point art and metal didn’t generally mix but right here was where all that was about to change.

Nowadays we have so much exposure to a band before we get to buy an album from them…MP3s online, greater proliferation of rock radio and TV shows…etc but in 1988 I would still get that sense of anticipation when playing some virgin, unheard vinyl. Would it be a classic or was it money wasted? In every case I could never prepare myself but with Jane’s Addiction the anticipation was heightened by what would surely be an unfamiliar sound. The needle hit the plastic and a gentle bass line draws you in before you are hit at once by an ugly yet beautiful cacophony of noise…a discordant blast of white hot guitar and other worldly droning vocals. It was jarring and unsettling yet oddly familiar in its reassuring heaviness. As “Up The Beach” progressed into a cavernous groove underscoring Dave Navarro’s psychedelic pyrotechnics it was clear that here was a band who had a keen ear and respect for rock’s history but a determination and enough of a sense of disconnection to attempt to reclaim rock for themselves. The song crashes and fades heralding in a gentle, clean picked guitar and it becomes clear that track one was merely a teaser, an intro, a trailer for the main event. “Ocean Size” is where this album really kicks off…ladies and gentlemen, welcome to Jane’s Addiction. The band were heavy, very fucking heavy!!! They could easily out heavy any thrash or death metal band but it was a different kind of heavy, it had a groove, it had dynamics, it had spirituality, it was dark yet it was uplifting. The rhythm section immediately shone as the equal to Bonham/Jones or Ward/Butler, laying down a solid bedrock over which Navarro’s guitar slashed and weaved from over the top heroics to tender introspection…a new guitar hero forged from the past, present and future. Then there was the voice of Perry Farrell. Filtered through a myriad of effects, psychedelic drugs, narcotics and psychoses, Farrell’s voice soared like a feral Robert Plant bursting with pheromones with a ragged edge that was genuinely terrifying yet utterly compelling throwing out irresistible melodies one after the other.

“Had A Dad” continued in the same vein but it was the next track that would really shake things up. “Ted Just Admit It” looked at Ted Bundy’s crimes and forced people to examine a society in which this could happen…complete with sound clips of Bundy himself from the trial. Musically the song builds from a sparse drum and bass groove that almost flirts with reggae, with horn parts bizarrely created by Farrell using his mouth(see…weird). The song builds gradually around Farrell’s plaintive vocals and Navarro’s restrained lines before exploding with jagged shards of vicious guitar. The combination of Bundy’s samples and Farrell’s primal shrieks of “Sex is violent” must surely rank as one of the most visceral and potent moments in rock history. From here it is clear that Jane’s Addiction have ripped down the boundaries making death metal’s horror aesthetic seem cartoonish and glam rock’s posturing seem empty and impotent. Jane’s Addiction were at once destroying rock yet reviving it.

The cathartic pinnacle of “Ted Just Admit It” leaves the listener in danger of being emotionally wrung dry and Jane’s Addiction seem acutely aware of this so instead of dragging you further into their harrowing world they flip the mood on its head for the second half of the album. “Standing In The Shower…Thinking” is a refreshing blast of funky hard rock full of Hendrixy rhythms work from Navarro and a self aware yet universally familiar lyric from Farrell…we’ve all got lost in our thoughts in the shower right? In stark contrast to the brutal outpouring of “Ted Just Admit It” Jane’s Addiction then come up with one of their most achingly beautiful songs…possibly one of the most beautiful songs of all time. “Summertime Rolls” is a gorgeous, psychedelic piece of whimsy that flows and grows built on delicate guitar lines and a wistful yet nonsensical psychotropically bent lyric that seems to mean nothing yet perfectly evokes the sense of lazy, hazy summer days spent utterly wrapt in the company of a lover.
Jane’s Addiction then revisit the vibe of the earlier part of the album to keep things in balance on “Mountain Song”. One of the most celebrated songs on the album it is also one of the band’s heavier offerings kicking off with a trademark Eric Avery bass line and featuring a rousing tribal rhythm and a vibrant metallic riff from Navarro. The song has range and expanse much like the subject of the title. Whether playing their heavier songs or their lighter material Jane’s Addiction always created a highly evocative and emotional sound. In the case of “Mountain Song” one gets a true sense of their grandiose intentions. “Idiots Rule” redresses the balances somewhat with another excursion into funk, this time featuring prominent staccato horns from Flea from The Red Hot Chilli Peppers and members of Fishbone which serves to highlight the sense of community in the alternative rock scene at the time and also the band’s willingness to work outside of their comfort zone, if they even had a comfort zone to start off with.

It’s impossible to pick out a highlight on an album that is largely free of any imperfection but “Jane Says” is something of an anthem for the band, not least due to the title. Based on a simple, repeated two chord acoustic guitar pattern and augmented by some surprising yet totally appropriate steel drums, the song tells the affecting story of the girl that gave the band their name…a heroin addicted prostitute friend of Farrell. It’s perhaps his relationship with the girl in question that adds a strong emotional undertow to the song yet the lyric serves as such a strong introduction to the character it’s impossible not to paint an incredibly vivid picture from the highly descriptive lyric. Incredibly this song exists beyond the confines of its lyric as the story is not finished being just a snapshot of Jane’s day. It does leave you wondering about the fate of Jane and that is unique in song writing terms.

The vinyl version of the album finished with the brief lounge jazz interlude of “Thank You Boys”, clearly bookending the album with “Up The Beach” and drawing a line under it. The CD issue features an earlier song “Pigs In Zen” which, although a great song seems somewhat superfluous when the band have already created their magnum opus but hey, you can never have too much Jane’s Addiction.

“Nothing’s Shocking” is an album that exists out of time yet is timeless. There was nothing like it before its release and arguably nothing like it since. The band did go on to release the almost as good “Ritual De Lo Habitual” in 1990 that continued in much the same vein whilst developing the sound in some areas and “Been Caught Stealing” did see the band at their commercial peak. Occasional reunions have followed and even a couple of rather fine albums but nothing has matched the sheer visceral beauty of “Nothing’s Shocking”. 25 years after its release I still find myself going back to it at an alarmingly regular basis and still finding it both fresh and refreshing. After all this time it still reveals little hidden tricks, a subtle acoustic guitar overdub here, a percussive twist there and I have no doubt, in 25 years time when I am an old man, this album will still sound more vital and alive than whatever music we’ll be force fed in the future.

Nice review. But their magnum opus is surely "ritual de lo habitual", an absolute classic of an album of any genre, still on heavy rotation with me.