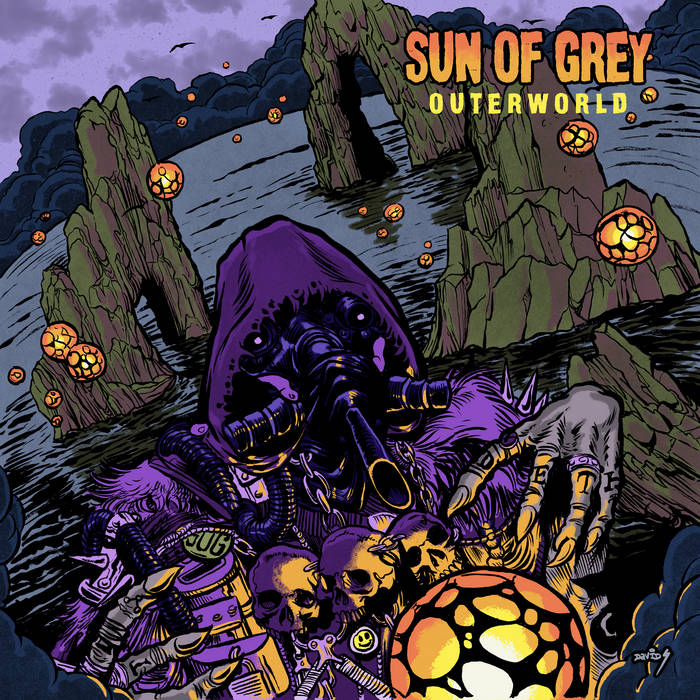 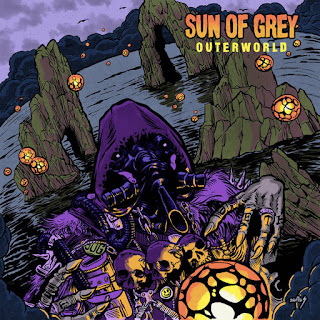 "Very few bands have said so much, or have entertained so immensely and thoroughly, within the span of a mere handful of songs."

There! That is the layman's simple, to-the-point version of why we are here and you are reading this, a synopsis of the late 2020 offering from SUN OF GREY, "Outerworld". With its fully fleshed out manifestation making the band a pair of official releases under their belts, this latest outing takes us to places only hinted at previously. The first SUN OF GREY effort was the 2-song, eponymously titled EP issued in 2017 and now, the second coming is the aforementioned "Outerworld", a game changer if there ever was one.

That's right, dear readers, our three maestros of remarkable musicality calling themselves SUN OF GREY are bassist/vocalist Freddy Allen, guitarist Ian Hopkins, and drummer Jim Merz. What this trio accomplishes within the structural confines of "Outerworld" is a stupendous display of genre-meshing done with expert execution. Rife with abundant amounts of progressive doom at its deepest foundation, the powerful three meld psych-tinged space metal with more traditional rock elements, weaving it all into quite an aural tapestry.

The departure into "Outerworld" begins with the slow, oozing start of the introductory number, "Dark Souls". Given that start via restrained pacing by way of minimal, tribal-like drums, these are soon augmented with fuzz encased guitar emanations and synthesizers moaning to life. A soupy, sonic haze soon surrounds us, deliberate and with purpose it envelops us wholly. Whirling and churning unhurriedly, we find ourselves being pulled inward as ethereal vocals make their presence known. The whole thing takes on a menacing feel in due time, heaving with haunting nuances as Allen's vocals take on much burlier inflections to match the music. 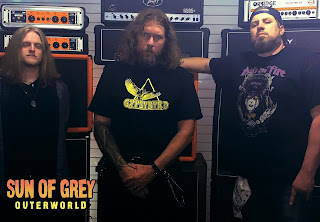 As we hurtle headlong toward the eventual cessation of this first track, the seeming certainty of a malevolence only grows. This is only allayed when wailing guitar salvos scream at us in brief intervals, bombastically staggering. They serve as a precursor of sorts, for once gone, the weighty deluge titled "Jar Of Leeches" begins to unfurl with a deliberate pummeling. A most exquisite beat and battery too, and dare make no mistake for there is mass making its case here, building... gaining. Augmented with rhythmic centered grooves, things begin to increase in tempo as a cautionary tale is regaled lyrically.

It was then, "Lucifer Smiled", and within that devilish grin was revealed one of my own favorite songs from this album. A choppy, almost circular ebb and flow is delivered amid an almost stop-and-go musical styling. Reverberating in ones' skull, embedded and echoing, an entrancing pattern trudges forward. This hypnotic dirge is harrowing at times but even that merely hints at the ominous undercurrent about to pull everything under. Halfway through, we realize, yes, "Lucifer Smiled" alright, with the blasphemous sneer of a soul forever lost.

We're in the grit now... there's a tangible shift in attitude and aggression, with immediate confirmation via aural declarations. Like a dystopian day is discernible in its musical equivalency, this trio tap into powerful performances for the remainder of this standout song. This is no fluke either, it is deliberate and akin to an audio prizefighter's T.K.O., a one-two knockout.

The second blow comes via track No. 4, the on-the-mark title number, "Outerworld". Building up to it is a monologue of what I believe to be an apocalyptic, End Of Days prophet. The music of the album's namesake track is a propulsive composition, one moving us forward, advancing yet done amid rather dark overtones. Haunting, eerie emissions of electricity enhanced emotion are resolute, but of a truth, the whole of SUN OF GREY radiate through this darkness. Every aspect of this band's talent, be it from songwriting to serving up a "signature song" (if there is such a thing) appears here on the album's lengthiest track.

Also, the vocals and their arrangements, alterations / manipulations, and what not, are a major piece of this genius. Their blended meld into these sonic discharges reveal a lot more below their surface, pulling back the curtains of a cosmic infinite. Inspirations, and or influences, are on display here with everything from Fudge Tunnel or Helmet, to Zoroaster or any Justiin K. Broadrick project present throughout "Outerworld". 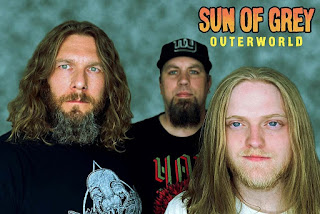 The impressing for us is far from over as another stellar, thunderous transmission quickly gets under way with "Silent Screams". Mesmerizing, rhythmic riffs and bass lines are tightly interwoven, with the proof being in the groove. Along the way, this stand-out track utilizes fiercely fiery guitar solos, those of the fret melting variety. With some mescaline-like intensity, celestial winds of Desert Rock finesse roll across the planes of this narcotic Pink Floyd-meets-Kyuss type composition.

As has been occurring thus far, another remarkably dramatic construct from Colorado comes forth in "Disease". This discreet nod to New Wave and even Goth Rock is an assured lethal finish eventually... but for the next seven-plus minutes, a jarring of your soul occurs. Devouring the light, the invocation of the occult and mysticism in a musical language fuels a tangible foreshadowing. The effect-embedded, repetitive vocal drone is again, ideal and well suited for this song as I derive a Middle Eastern or Egyptian presence from this powerful end piece.

As there is in all things great and small, items of sheer excellence are to garner acknowledgement and accolades. In other words, it is only proper and fitting we give those responsible their due respect. A most positive comeuppance if you will, and one square on the money with our Centennial State sentinels, the three within SUN OF GREY. Yes, Allen, Hopkins, and Merz, have crafted themselves a remarkable recorded offering with "Outerworld". This soulcraft is a fitting representation of the trio's muscular musical prowess foremost. From the earliest, initial notes and chords to the moments capturing the act of creation complete, "Outerworld" inspires the innermost humanoid beast indeed.