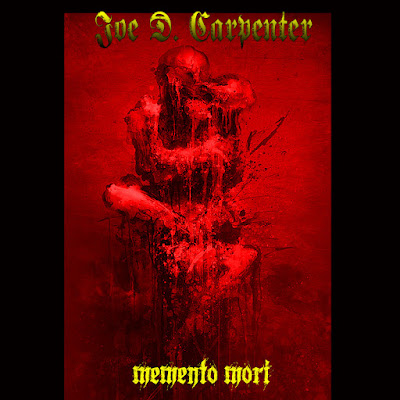 After 10, yes 10, brilliant EPs in two years, Joe Carpenter has finally released his first full-length, 'Memento Mori'. And I think that's a very good move on his part. By doing the EPs first, which shifted and changed paths slightly, definitely helped Joe forge and shape the direction he really wanted to take and that in turn made the time right for a full album. And what is there to say? Hell fucking yeah!

On ’Memento Mori’ Joe has crafted a very nice blend of black metal, death metal and cinematic tones, as well as a healthy dose of himself. And the outcome is perfect. Usually when several styles are mixed, the result shoots off in too many directions without anything holding it together. Joe is on the opposite end of the scale weaving and tying it together so seamlessly. And this gives the songs such a nice, well-balanced flow. All while the music is completely crushing me. Fantastic! 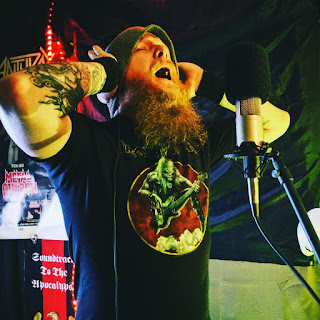 Out of the eleven tracks, seven stand out a touch more than the others. ‘Mithraic’ is, heavy, pounding and punishing. This is doomish death metal with cool undertones of controlled chaos. The instrumental ‘I Hail, I Conceal’ is slow, lurking and downtrodden with explosive bursts when you least expect it. ‘Pythagoras’ bring intense brilliant death metal. And those riffs, man! A neck breaker if there ever was one. Lead-heavy and unforgiving, that’s all I can say about the excellent ‘The Sublime And Supreme’.’Est Dominus Muscarum’ is minimalistc and cinematic. And fantastically beautiful in its stripped down and slow manners. The song breaks up the heaviness prevalent throughout the album and gives everything a chance to breathe. This is an excellent instrumental piece! Another instrumental, the brief interlude ‘Circe Into Swine’ follows the cinematic pattern of ‘Est Dominus Muscarum’ and leads perfectly into the album closer, ‘If Thine Eye’. Joe’s love for black metal come to the fore here and actually shows how well he blends this pretty brutal style with melody and space. And I can’t stress how much I love that. You don’t have to go at it 400 mph without a break. Put silence and minimalism at center stage sometimes and the end result is beyond words. And that’s what Joe has done especially. Greatness, indeed!

Don’t for a minute think the songs I left aren’t good, on the contrary. ‘Memento Mori’ is genuine and near-perfect from start to finish, so Joe definitely made the right decision to finally release his full-length solo debut. The time was right for that. By adding this wonderful album to his vast discography I am extremely eager to see Joe has in store next. While waiting for the next recording I strongly suggest that you, dear wave rider, let ‘Memento Mori’ sweep you away, so you can marvel at Joe’s brilliance.