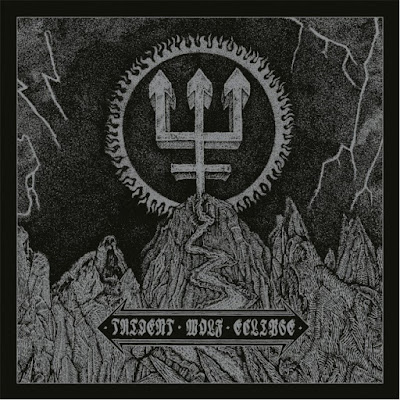 When any of us goes all in on something, the results can be impressive. Perhaps you have a business idea, or you have found the love of your life, or you find a cause that you can really get behind. When we find that one thing and we pour ourselves completely into it, it can be life changing. If you are an artist and you go all in, you get an album like this one.

This is one of those albums that really took me by surprise. Their last album, 2013's “The Wild Hunt”, was actually pretty tame, and many fans of the band felt that perhaps hitting middle age (in band years anyway), we had seen the mellowing of the band. This new album, however, is full of fierceness and ferocity and seems almost a rebirth of the rampaging beast that we had known as Watain.

If you are not familiar with Watain, they are a black metal band from Sweden and they are most definitely “all in”. Black metal is not just a musical genre for them but has become a lifestyle that they have followed for 20 years now. Their album artwork and stage designs are made of various symbols that represent what they believe, and their placement and use is very purposeful. They are a band that does not just perform, but can rightly say that each time they play it is a ritual. They are one of the few bands active today that can truly lay claim to being a personification of what black metal truly stood for when it first drug itself into being as a means for cultures to reconnect with their pagan histories.

The album is also informed by the suicide in 2014 of Selim Lemouchi, a founder of the band The Devil's Blood, and a touring member of Watain. With the beliefs that they hold, a band like this is very insular, and the band members freely admit that his death had a huge impact. They have obviously taken this influence and molded it into a part of what they do.

The music rips and blasts like few things I have heard in a while. Opening track “Nuclear Alchemy” is so different from their previous album that I really had to remind myself who I was listening to. The album is full of wild and unhinged music and lyrics, as though the past few years have freed the band to unleash the true fullness of their feelings and beliefs. Read the lyrics to “Towards the Sanctuary” and you can basically take them as a manifesto of what the band is about and what they would see transpire in the world. In my mind this album is nothing short of a black metal masterpiece.

Watain will be on tour in the US in February and March and it would be in your best interest to take in a show if they come through your town. As great as it is to hear their recorded work, a live show is where you can truly connect with this band. This is music that transcends the boundaries between our mundane lives and the other possibilities that exist, and why wouldn't you want to check that out.