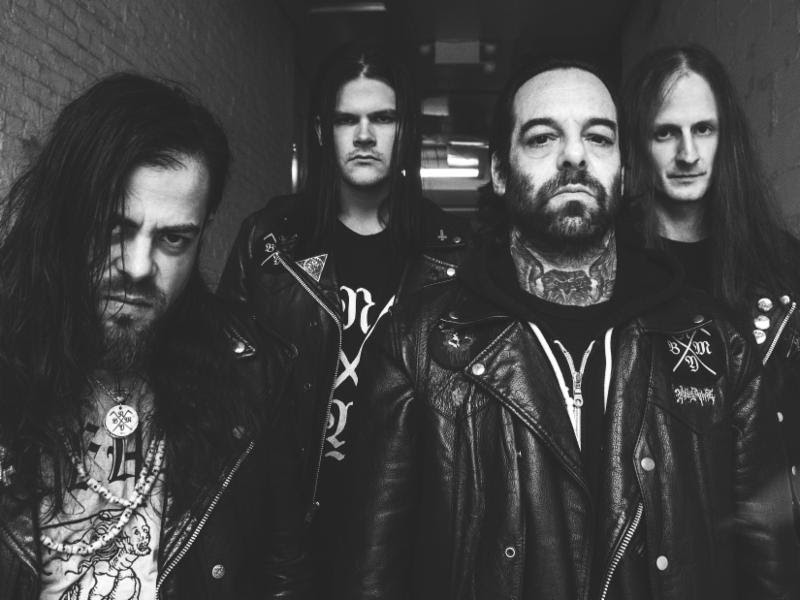 New York City's BLACK ANVIL will kick off their North America tour later this week supporting black metal legends Mayhem and Inquisition. The trek will commence on January 20th and march its way through over two dozen cities, coming to a close on February 19th on their home turf.

BLACK ANVIL will be touring in support of their As Was full-length, unleashed last week via Relapse Records. Reaping critical accolades globally, in a recent investigation of the record, Pitchfork hails, "Like Celtic Frost before them, BLACK ANVIL find ways to summon profound darkness without tapping into black-metal clichés. Their latest ebbs and flows with effortless grace." Clrvynt crowns As Was BLACK ANVIL's, "most ambitious effort yet," while Noisey lauds the record's "evil riffs, vicious grooves, and an uncharacteristic abundance of soaring clean vocals." Decibel observes, "While maintaining their familiar scorched palette, they also employ breezy prog excursions, sunbaked steel guitar, and white hot Priestian trad metal," while Bandcamp, in their Album Of The Day honors, notes, "Thematically, the album tends toward a cerebral interpretation of the Satanic; rather than focusing on the demonic mythos, BLACK ANVIL are more concerned with internal struggles, and the necessary balance between darkness and light (See: 'As An Elder Learned Anew' and 'Two Keys: Here's The Lock'). And indeed, BLACK ANVIL prove themselves here as masters of equilibrium - the fluidity of stylistic and thematic tensions results in an album that is creative and challenging, the next step in their quest to push USBM forward, with hearty hails to the dark energies of the recent past."

As Was is out now on Relapse Records on CD, 2xLP, and digital formats. Physical orders and bundles are available via Relapse.com HERE and digital downloads can be preordered via Bandcamp at THIS LOCATION where the record can also be streamed in full.

Atmospheric and melodic without relenting any of the ferocity BLACK ANVIL has always been known for, As Was seamlessly weaves through eight monumental passages of extreme metal art. More diverse, complex, and thought-provoking than anything they've released previously, As Was is a stellar representation of modern black metal, and of BLACK ANVIL's continuous progression and songcraft. As Was was recorded at Menegroth by Colin Marston (Krallice, Gorguts, Panopticon) with mixing and mastering done by Tore Stjerna at Necromorbus Studio (Tribulation, Funeral Mist, Watain), and features cover art by Metastazis (Behemoth, Watain, Morbid Angel).