Sacrament Ov Impurity – All The Colors Of The Dark 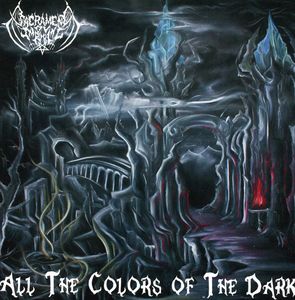 I awoke, unsure of where I was or the last thing I had done.  Even in this state, I felt a sense of freedom and exhilaration, as though my mind had finally been set free of the chains and boundaries that life and society place upon us.  I knew, instinctively, that I had found the true path, and I had done so the night before.

As my faculties continued to come back to me, I began to remember.  The previous night was the autumnal equinox, and I had gone to celebrate in a way that was new to me.  I remembered a chapel of sorts, with figures in robes and ancient symbols and runes all around me.  There were chants of ancient rituals, words that had been spoken since the dawn of time, that paid homage to dark secrets, secrets that had been shared with mankind by the Master.  I saw torches flaring in response to these words, I saw spectral shapes rising from the flames to join in the celebration.  All was rising to a crescendo of souls, as those of us in fleshly forms joined with the specters in a chaotic and magnificent dance that went on and on throughout the night.

And the music!  It was a frenzy of demons themselves, dark and black and metallic.  It wove around us all, sometimes fast, sometimes slow, louder, then softer, but always leading us on, taking us through the chants and rituals, pitch perfect to each step of the dance.  It seemed to be the music of Hell, and it was performed with crushing, pulverizing precision, and though it seemed that it must be a host of dark beings performing this soundtrack, when I think back I could remember only two.  It was a creation of perfect blackness, driving us on and taking us beyond all sense of reason.  It was a cacophony of demonic brilliance and the evening would not have been the same without it.

Now that these memories had flooded back, I suddenly felt bereft and barren.  I wanted to go back to the events of the night before, but I did not know the way.  I did not how I could bring this to pass again.  It was then that I noticed, in my left hand, a CD, titled “All The Colors Of The Dark”.  I knew this was the key, the way, to take me back to the exultation that I had felt the previous evening.  I knew, with this disc, that I could recall those events whenever I wanted to.  I knew that my life would never be the same.  The madness danced behind my eyes and my soul glorified the darkness.  I was ready to play this disc again, and ready for new meaning to my life.