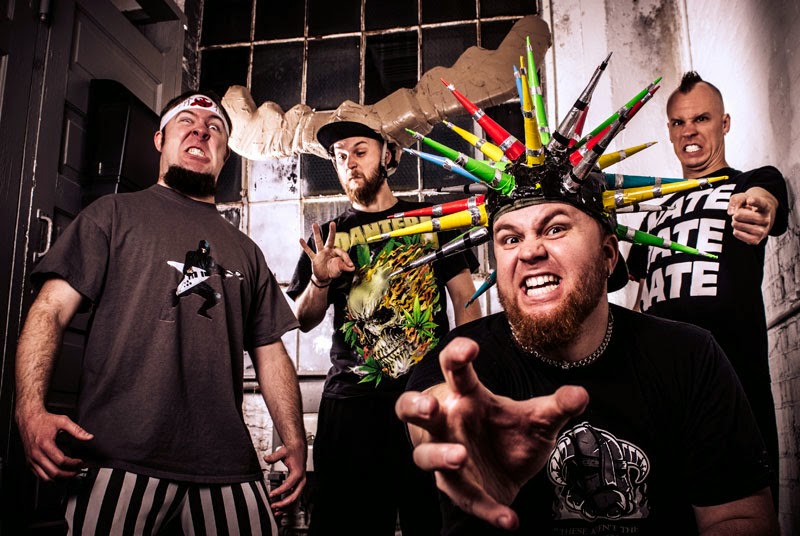 PSYCHOSTICK will be venturing out on the road from October 31st to December 4th promoting their new album ‘IV: Revenge of The Vengeance’ due out on November 4th via Rock Ridge Music.

Tickets on sale now and can be purchased here. (dates listed below)

“In a world where danger is every where, where the only currency is fear, only one band can save us, PSYCHOSTICK! they took their revenge, but they forgot about… their vengeance!” (lyrics from title track intro).

Chicago, IL based comedy rock kings PSYCHOSTICK have posted a new lyric video for their tribute track to the world’s greatest action hero ‘Bruce Campbell’, which can be viewed here. The tribute is off their new album ‘IV: Revenge of The Vengeance’, released last week on November 4th, 2014 via Rock Ridge Music and available on iTunes here, all major online retailers plus the band’s online store.

IV: Revenge of The Vengeance

Featuring tons of news titles such as ‘Quack Kills’, ‘So. Heavy’, ‘Blue Screen’, ‘Bruce Campbell’ (a tribute to the 21st century’s most beloved action hero), a spoof cover of Kenny Loggins’ ‘Danger Zone’, guest appearances by Bill Manspeaker (founder of Green Jello), Neil Patterson and Rob Nichols from Downtown Brown plus their previously released singles, the beard anthem ‘Obey The Beard‘ (debut at #14 on US radio metal charts) and ‘Dogs Like Socks‘ (over 1 million views on youtube). ‘IV: Revenge of The Vengeance’ is the perfect follow up to 2011′s ‘Space Vampires VS Zombie Dinosaurs in 3-D’ to add to the laugh makers manymany popular comedy sing-a-longs.

Harnessing their crazy sense of humor and love of all things metal, vocalist Rob “Rawrb” Kersey and guitarist Josh “The J” Key joined forces with drummer Alex “Shmalex” Dontre and bassist  Matty J “Moose” to create Pyschostick, a band they’ve coined as humorcore. With hilarious lyrics, heavy riffs, notorious stage antics and high-energy performances, the band has caused millions of laughs around the world and hundreds of mosh pits across the US of A, often simultaneously, since its birth in Phoenix, AZ in 2000.

Now residing in Chicago, IL, with four full-length albums behind them – “We Couldn’t Think of a Title” (2006), their holiday album “The Flesh Eating Rollerskate Holiday Joyride” (2007), “Sandwich” (2009),  and “Space Vampires vs. Zombie Dinosaurs in 3D” (2011), the almost 100 percent do-it-yourself laugh factory, Psychostick returns with their signature sound (Chimaira, Machine Head and Hatebreed sexing Tenacious D and Weird Al Yankovic) to showcase their latest offering, the crowd funded album ‘IV: Revenge of The Vengeance’ (fan thank you video http://www.youtube.com/watch?v=iSeQHqMCfJI) due out on November 4, 2014. Featuring a hilarious track listing that includes previously released singles the beard anthem ‘Obey The Beard’ and popular ‘Dog Like Socks’ plus new tracks such as ‘Quack Kills’, ‘So. Heavy’, ‘Blue Screen’, and a tribute to the 21st century’s most beloved action super hero ‘Bruce Campbell’. Psychostick are crazy to share with fans many more comedy sing-a-longs on the road and more!

“In a genre with a lot of anger, aggression and seriousness, every once in a while some levity is good. That’s wherePsychostick come in. Their fourth albumIV: Revenge Of The Vengeance is musically solid and lyrically amusing.” – Heavy Metal – About.com


“Psychostick pulls the pin from a hand grenade and shoves it down the gullet of comedy. When it explodes, anyone within earshot finds themselves covered in the entrails of hilarity! These guys are off-the-chart insane. Imagine if the cast of “Jackass” formed a metal band with Andy Samberg, Sam Kinison, and Seth Rogen and then they threw a house party that made “Project X” look like amateur hour by comparison. Yeah, now you’re getting it!” – Axs


“I do like when bands like Pyschostick inject humour into songs and REVENGE OF THE VENGEANCE is pretty damn funny…The first single ‘Obey The Beard’ is magnificent and this is coming from a clean-shaven dude. It made me want to grow one. Comedy Metal fans can listen for a couple of inside Metal jokes (Captain Stupid!) and a cameo by ‘snaky’. The production is immaculate and as always these guys are as heavy as hell. Weird Al on crack. I wanted to use that phrase and I couldn’t even think how to work it into this review so I just dumped it here at the end. Humour is so subjective but I know what I like and I really like IV: REVENGE OF THE VENGEANCE.” – Metal Rules


“IV: Revenge of the Vengeance isn’t just a Psychostick album, it’s a Psychostick experience. They really went all out on this album. Not all of it makes sense and some of it may be a little over the top, but that’s what makes this band so great- they aren’t afraid to push the envelope of ridiculousness. In fact, they bask in it. Get ready, world. Get ready for the revenge of the vengeance and one of the most action-packed metal albums ever concocted. Rating: 9/10″ – Front Row Report
Posted by The Ripple Effect at 9:49 AM