Whore Of Bethlehem - Upon Judas' Throne 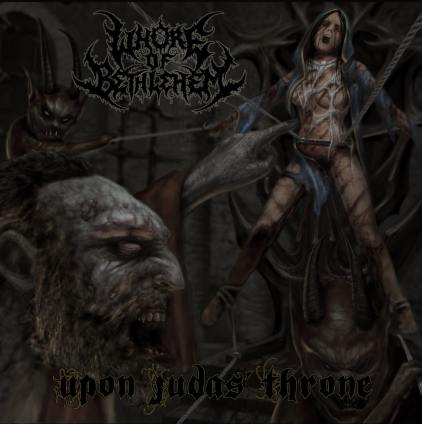 I don't know what it is about Mary.  You know, Jesus' mom?  If you believe in the whole virgin birth, Immaculate Conception thing, there was no way she was a whore.  Yet she receives almost as much scorn and derision from the metal community as the Savior himself.  Along come this band, Whore Of Bethlehem, to add to it.  I'll just add this to the very long list of things I will never understand.

This band though?  These guys I get completely.  Hailing from Austin, Texas, these gentlemen are another of the really, really good metal bands from the Lone Star State.  They are right in my wheelhouse.  If you love you some Behemoth, Belphegor, and Watain, you'll be absolutely head over heels for these guys.  They have a pretty fantastic mixture of death and black flavors of metal, and they blend the two styles so well that tracks flow from one to the other and back again with ease.  They have this blend down and they crush.

They've got a singer who sounds as though he's gargling battery acid and enjoying it.  Their drummer is a beast, with blast beats and fills and all manner of demonic battery going on behind the kit.  Guitars and bass lock in on some killer riffs and really deliver.  There aren't a lot of solos, per se, in this type of metal, but don't let that allow you to think that they don't have any chops.  It takes a lot of skill to deliver technical riffs and not sound like a robot, and these guys have it.

As far as songs go, these are all brutal.  My favorites are the title track and album opener, “Detest The Belief”, “Christ Crusher” and “Nocturnal Hauntings”.  They hit my sweet spot, hammering and blasting away in blackness, then moving effortlessly into more death style passages.  The songwriting is very good.  The songs all sound like they know where they want to go as opposed to just a bunch of riffs pasted together.  A lot of bands can write killer riffs, but your songs have to be a little more than that if you want to separate yourself from the crowd.  What I can make out of the lyrics sound appropriately evil and in total opposition to Christianity, so they've got that locked down too.

I don't know what it is about Texas that brews up some seriously good metal.  Maybe its the heat all the time.  I know that would probably piss me off enough to be in a band like this.  Hopefully this album, which is self-released, will catch the attention of a label, because these guys certainly deserve to be signed.  In the meantime, go to Bandcamp and check them out.