I've been dying to start this column for ages now, but just never had the time.  So, let's get it going now.

We talk a lot about all the good music that's out there, new and old, but I also want to shed some light on the brick and mortar retailers that are out there fighting the good fight, keeping the doors open in an uncertain time, stacking the shelves with vinyl, CD's and DVD's.  Keeping the unparalleled experience of music shopping in an actual store alive.

I go record shopping often- I mean really often.  In my home area of San Francisco but also in every city I visit on every trip I take.  Almost always I'm digging for vinyl, but I wouldn't pass up a great CD package.  In this column, I want to shed some light on each of the stores I visit.  An honest review, sharing the good and the bad, hopefully helping you find a new music store for your own digs.

So, let's start with a killer joint.  Four blocks from my current hotel room . . . 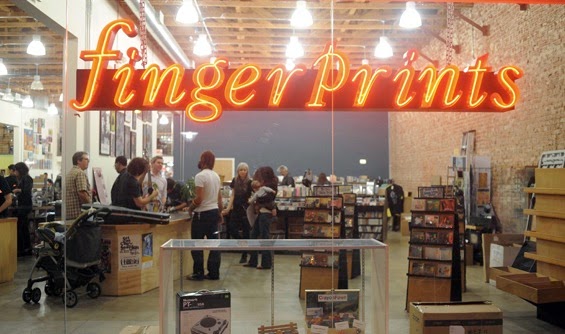 I love this store.  It's the pinnacle of what a "new" record store should be.  A huge vinyl section with new releases of all genres and an ample used section to go along with it.  There's even a small, but useful, discount vinyl area.  They have one of the biggest 7" vinyl areas I've seen in ages with a plethora of new and used discs including a good lot of punk rarities.  The CD section is massive and well-stocked.  The DVD and book areas are satisfactory and there's a good amount (but not overwhelming stock) of t-shirts, bags and nicknacks.   There's also a very nice cafe, Berlin, attached which makes it a great place to hang out and spend some time.  I had an Americano and Muffin while I read the paper and waited for the store to open.

So, let's get to specifics.  This was a vinyl dig for me, so after walking in I immediately dove into the discount boxes.  Like always, most of the stuff is old and not useful, but there were some damn fine surprises.  Stray Dog's "While you're down there" is a tasty slab of 70's rock for only $2.99 and Strap and Racing Cars albums were juicy finds.  Unfortunately, I had all of them already.  Instead, I settled on a Moby Grape "Wow" album for $1.99 and the Steve Harley "Love is a Prima Donna" LP for $.99.  Not amazing but not bad. 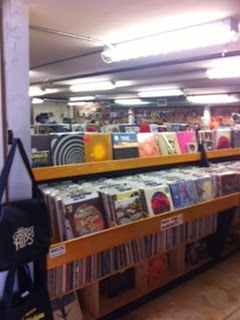 Grabbing my loot, I moved next door to the real vinyl area.  The walls were lined with some beautiful copies of rarities that were amazingly tempting but out of my price range for today.  In particular, a Sky Saxon LP was nice, but $80 was too much.  I stepped over to the "New Used Arrivals" and pulled out Diamond Rexx "Land of the Damned" for $4.99.  I've been on a cheesey, bad metal kick lately so that should fit right in.  A Talas album almost made it to my stack, but I gotta board a plane to get home and my suitcase room is very limited, so I bagged it.  The metal, punk and rock sections are extensive for digging and you never know what surprises will turn up.  I walked out with a Coverdale/Hughes -era Deep Purple "Live in London" LP, Bad Machine (finnish garage punk on Dead Beat Records), Off! "Wasted Years" and a still-sealed 70s rarity, Morningstar "Venus".  Prices varied from $4.99 for Morningstar to $14.99 for Off!  The Purple was $8.99.  So all pretty reasonable.  Perhaps the best find was a 1973 southern rock album from a band called Texas.  I'd never heard of these guys, but I'm always on the look out for obscure 70's rock.  Discogs listed two available copies starting at $85, so I felt like I got a steal for pulling this one out at $2.99.

One great thing about the store--given it's proximity to LA -- they have a great stock of LA punk, new wave and metal bands, stuff that is relatively common here in So Cal, but damn hard to find in other parts of the country. 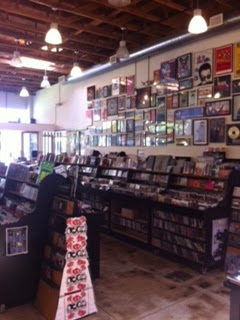 Another thing that really stands out about Fingerprints is the service.  I noticed it last time I was there and again this time they blew me away.  I asked one of the clerks if they had the Off! box set, and he set off on an expedition for nearly 10 minutes looking for one.  He almost looked forlorn when his quest came up empty.  Before I left, he pulled me aside to show me some new vinyl that had just been turned in, wanting to give me first crack at them before they went out.  Damn cool considering I'd never met the guy before. Each clerk was super friendly, knowledgable and not the least bit condescending of customers musical choices.

The store is clean and well-lit and is the type of place my wife wouldn't mind accompanying me too.  She could sit in the cafe or outside on the tables, having a croissant and tea while I dig my brains out.  If there's a downside here, it's that things are a little pricey, not too excessive, but let's say they do know the value of their merchandise.  Amazing finds at a discount are rare.  A new album is usually around $20.  Obscure 70's prog or metal will run about that much also.  Some new albums go up to $40.  Average used price is around $8-12.  But, in truth, those prices are fair and at least you have a good chance of finding a rarity there.

Once a year, I head down to Long Beach and Fingerprints Records is one of the highlights of my trip.  If you're in the area it's definitely worth checking out.