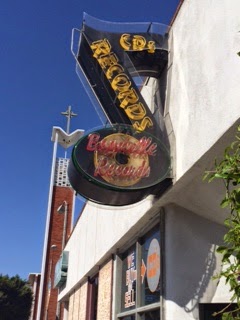 Still in Long Beach.  Last column I wrote about the uber-modern Fingerprints Records, today we're gonna jump into one of my other favorite record stores. . .  but for totally different reasons. 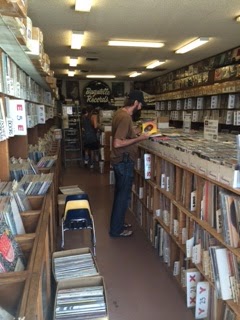 At Bagatelle, you're not going to find a cafe.  No t-shirts, bags or cute merchandise.  It's small, and cluttered and probably hasn't been dusted since the Eisenhower administration.  On days when it's hot (which is often in Southern California) it can be a tortuous sauna inside.  No air conditioning and no ventilation.  It's like the Bikram Yoga of record store digging.  Basically, my wife wouldn't last 5 minutes in this store.

But I can't ever seem to get out in less than three hours.

If you're a digger, this place is just this side of heaven.  There's no new vinyl here.  Some CD's (not too many as I recall anyways.... there probably are some, somewhere).  What there is is vinyl.  Tons and tons of vinyl.  All old.  Many rare.  And they line every square inch of the place.  I liken Bagatelle to stepping into an eccentric uncle's garage and suddenly realizing you're in collectors heaven.

Now, in truth, Bagatelle is organized better than weird uncle Ernie's garage.  Rock lines the left wall and center.  Albums are alphabetically separated with slots for major artists.  Jazz (and a huge jazz section it is) lines the left wall.  Everything else is somewhere.  Boxes of 7" line the top of the shelving, very far out of reach, and I've never yet had the chance to dig into those boxes.  Rare stuff lines the walls-- on this day highlights were an original Dust album and three original early Pink Floyds.  Best of all, Bagatelle features 3 turntables with headphones for you to sample your finds, which makes it perfect for taking chances on vinyl you've never heard before. 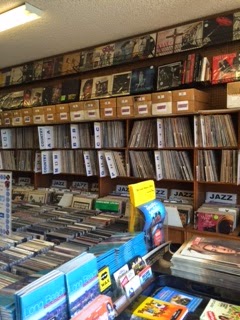 I'm a big fan of obscure 70's rock, and I've never walked out of Bagatelle without a massive stack of great stuff. I've taken a chance on some random vinyl and turned up some amazing albums. like Sweet Pain.  Prices are reasonable, usually around $7 per disc, sometimes up to $15.  I don't think I've ever spent $20 on a single LP yet.

I've been to Bagatelle 3 times and never spent less than 3 hours there and I've never even come close to sampling the whole store.  One hour wouldn't even get me half way down the rock wall. The place is like an Einstein-ian vortex, where space and time cease to exist.

Highlights of this trip were the Estus album (with Marky Bell) for $7, an original Ronnie James Dio, Elf album for $7, the second Black Sheep album (with Lou Graham) for $5 and two Goddo albums for $7 apiece.

Service at Bagatelle is good as well. The owner is always there, and while he sometimes seems a bit tired, he's always willing to talk music and help you find your quests.  Often times, when you buy a stack, he'll discount things or toss in a free album altogether.

So when in Long Beach, enjoy the vibrant atmosphere of Fingerprints but don't forget to bring your spelunking kit and dig into Bagatelle.  Just make sure you have several hours to kill, because the time will go by very quickly.