ORANGE GOBLIN Premieres New Video Via Noisey; Back From The Abyss To Drop Next Month 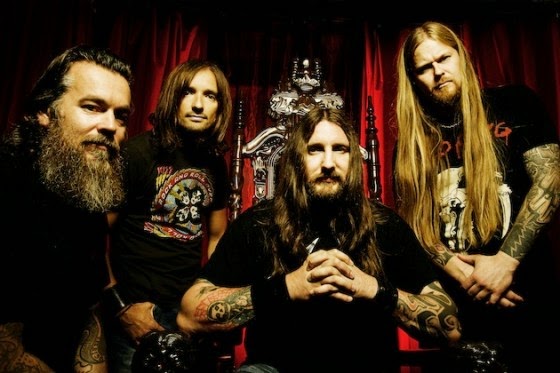 With the release of Back From The Abyss, the forthcoming new full-length from stoner metal icons ORANGE GOBLIN, now less than one month away, Noisey thrusts forth opening rager, "Sabbath Hex."
Bedecked in high-speed psychedelic visuals and an occultish-vibe, the Michael Dickinson-produced clip is currently slaying eye holes via Noisey at THIS LOCATION.

And if you missed it, check out the Motörheadian dirt rock swagger of "The Devil's Whip" still streaming at Loudwire HERE.

Recorded earlier this year in London, ORANGE GOBLIN's Back From The Abyss was produced by Jamie Dodd, mastered at Turan Audio and follows the band's most successful release, 2012's A Eulogy For The Damned, and the recent reissue of their 2007 album Healing Through Fire. Rocking hard as fans have come expect, Back From The Abyss shows not only the band's signature blues 'n' doom persuasion but the high caliber of their musicianship. In an advance 9/10 review of the record, This Is Not A Scene crowns Back From The Abyss, "another triumph for ORANGE GOBLIN," furthering that it maintains the band's, "consistent level of songwriting and performance all the way through its twelve tracks that make this their most accomplished album to date. Proof that hard work does indeed pay off."

Together since 1995, ORANGE GOBLIN has released seven full-length studio albums. A Eulogy For The Damned was the band's first for Candlelight Records and closed a five year recording hiatus. The album was supported with the most live dates by the band in their history; touring that saw the band on North American soil first alongside Clutch then on a full-scale headlining tour that found them on thirty-eight stages across the US and Canada. Two videos were filmed and released for the album, including "Red Tide Rising" and the special Scion A/V video for "Acid Trials."

Back From The Abyss will be released October 7th, 2014 via Candlelight Records. Preorder your copy at THIS LOCATION.