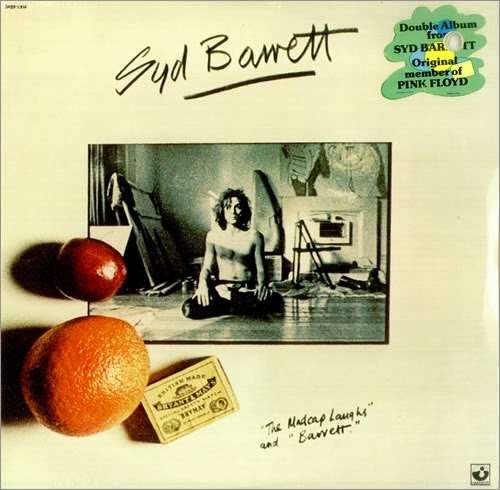 I'm always bad when it comes to knowing what year an album was released. I think one of the only ones that really pops off to me is 1980's "Back in Black." I was born after all these great albums, so the years don't relate to anything in my life.

So, when I heard we were doing a 1974 theme week, I hit the google machine.

At first, I leaned towards Robin Trower's "Bridge of Sighs." It's a solid album, and I've always liked it. Yeah, we'll go there! But, I don't have much to say about it, really. So, I dug. There were some good albums that year, but none of them were my "favorites." Then, I found it.

In 1974 a compilation of Syd Barrett's two solo releases was released under the simple title "Syd Barrett."
When I was in high school, I was mildly obsessed with Syd's solo stuff for a time. Like, listened to it all day every day. I thought (and still do) that the guy was a genius. His songwriting, as jangly and loose as it was in that post-Floyd era, was some of the most darkly playful music ever written. His music formed the soundtrack to a good portion of my adolescent experiences; fist fights, lovemaking, breakups, video games, you know the drill.

His voice held some kind of trauma behind it, even on such light songs as "Love Song" and "Effervescing Elephant." Others, like "Dark Globe", have been hailed as a stark insight into the mind of a schizophrenic.
If you've never listened to Syd's stuff, this would be what you need. Simple format, two discs (four LPs, if you get it on Vinyl), everything you need to hear from the broken king of psychedelia.