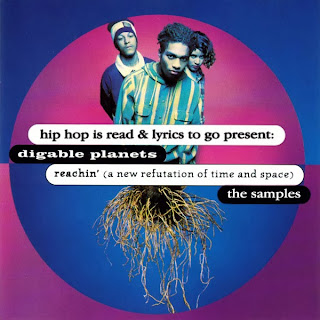 Perhaps not the album you'd expect me to pull off the shelves for my Sunday Morning listens, but Digable Planets never fails to satisfy that early am weekend need for something totally cool, chill yet still vibrant and funky.

Digable Planets weren't the first to fuse hip hop with old school jazz.  In fact, when this album came out there was a new budding genre of jazz hop, which took the positive spirituality of the hip hop underground (like De La Soul) and dropped it down in to the underground hip hop clubs of smokey cloves and dark lights.  Still, for my money, no one fused the coolness of jazz with the hip of rap nearly as well as Digable Planets.

The whole album flows with a mellow chill as the three members of the Planets, Butterfly, Ladybug, and Dooblebug, rap over the killer jazz samples with a steady flow.  The beats are nonstop, constantly moving things foward, but never harsh or exaggerated.  The use of samples, like the famous use of "Stretchin'" by Art Blakely and the Jazz Messengers, is always dead on.  Taking those old school licks and marrying them to fresh killer grooves.  But what really sets the album apart is the lyrical and delivery chemistry of the three insects.  Each has an easy, smooth style, never boastful or over-the-top.  Passionate and deliberate, yet relaxed and cool.  The whole album comes across as the best hip hop equivalent I can imagine to the Beat Poetry movement.  Skilled poets popping out personal psychology, social consciousness, and spiritual peace over the tone of a muted trumpet.

Another plus for the album, is that it's not marred by the self-serving interludes that seem to be the rage amongst so many rap/hip hop albums, where some disembodied sample or vocal outtake brakes up the flow between songs.  Not here, each song flows like that beat poetry slam, one after the other, beats dipping and flowing easily.  Effortlessly.

"It's Good to Be Here", starts the album off, setting the tone right off the bat with a thick beat over a hypnotic horn line.  But really, for me, the album starts to hit its stride with the very next cut, "Pacifics."   Perhaps the lyrics are one of the things that cemented this album into my brain as a Sunday Am album, as the song is about relaxing, sifting through the vinyl stacks, and chillin' on a New York Sunday.  The song brings us in with a killer jazz bass riff as Butterfly raps, "Butterfly searching for a relax, pulling from the jazz stacks/because it's Sunday./On the air is incense/Sounds to the ceiling/trying to get this feeling since Monday."  As he hits the "cooling in New York" theme, the beat kicks in and the song quickly drops into the sublime.  This is the definition of ultra-cool.  Ladybug and Doodlebug jump in as the lyrics alternate, dropping between verses or each taking their own and the full vibe of the three as one "Group" really kicks in.  Their voices all mesh with each other perfectly, almost like different registers of the same person.  A great way to start a Sunday.

"Where I'm From" adds a lighthearted touch to the proceedings over an uber-cool funky beat. By this time, 3 songs in, the album is flying on auto-play.  I'm floating in the insect world of the Planets, lost in beats so phat and mellow that I'm transported.  Grab a cup of Joe, chill with my feet up in front of the fire.  Let me go.  Let the stress of the prior week melt away.

Each song is strong, and as a whole the album is a cohesive vision, not a series of singles or tracks, but still, a special mention has to be made about "Rebirth of the Slick (Cool Like Dat).  This video was my first introduction to the band and I was hooked immediately by their underground jazz club vibe.  This was a world I was dying to enter.  Over that Art Blakely sample the Planets boast playfully about their coolness, never descending into false ego.  The track grooves and trip and the jazz is thick and the beats fresh.  I love the interplay of their voices, the ease of their flow.

It's still probably the best jazz-rap song ever done.

The Planets upped their cred in my book by performing live with real musicians to create their sound.  If I ever want to introduce someone to hip hop who swears they "hate rap," this is the album I reach for.  It's an essential component of any healthy record collection and an essential part of my Sunday mornings.