Goatwhore - Blood for the Master 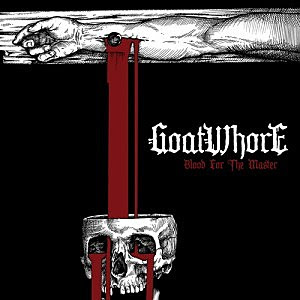 What follows, gentle reader, is my experience of their newest LP, Blood for the Master, wherein it may be safely assumed that your narrator is most thoroughly on said New Orleans-based  black/death/thrash 'n' roll band's proverbial dick.

Take that as you will.

(And call me over-analytical, but it amuses me that a band from the bottom of the Mississippi Delta, New Orleans, my home, can sound so much like an evolution of a band from the chilly Midlands of England, Birmingham.)

Track one, "Collapse in Eternal Worth," (which continues the Goatwhore tradition of seemingly/probably blasphemous yet-incredibly-vague song titles) opens with blast beats and segues to D-beats, but at around 2 minutes hits a
memorable, maudlin chorus (it's even  hummable)... like something from a lost Celtic Frost demo....

Track two, "When Steel and Bone Meet," (which, along with the above album opener, was pre-released) is a 3-minute D-beat, raspy-vocaled Satanic Discharge-fest.

Track four, "In Deathless Tradition," opens with that roar-of-roars-- and reiterates the necessary place of a great vocalist --including the line, "Forgiveness is the failure of your faith," again a wildly-vague yet sinister pronouncement in that rasp-of-rasps....

"Judgement of the Bleeding Crown," next, again with its opening blast beats, then Mötorhead-ish double-bass and D-beats, manages to sound like a heavier, early-career Ministry (think The Mind is a Terrible Thing to Taste)... track six,

"Embodiment of This Bitter Chaos," opens with an Atheist-like acoustic intro, complete with melodic guitar solo, only to segue to a lurching, forebeat-ish riff at around 1:00...

Track seven, "Beyond the Spell of Discontent," actually sounds like, in its chorus, memorable black metal, or the background of a Michael Mann film (analyze that commonality at your leisure)...

Song eight, "Death to the Architects of Heaven," adds a NWOBHM-ish flair to their Lemmy-and-co. sound before taking off into blast beats and minor verse riffs. It sound like something Metallica would've covered on Garage, Inc. or the $5.98 EP: Garage Days Re-visited.

"An End to Nothing" is a full-on rager, starting at double-bass out the ass D-beat velocity and never letting up, and track 10, i.e. closer "My Name Is Frightful Among the Believers," continues this blast-the-shit-out-of-the-ending-of-the-album tradition, alternating from blast beat to D-beats and back again

The fact is --perhaps memorably, and this, ironically-- these tracks are not at all memorable for the most part.

They're nearly all interesting (from a metal/musician standpoint), but pretty much none of them will linger in your ears (i.e., brain)-- they're so remarkably non-memorable that I wonder if this wasn't intentional.

--But again, I love to overanalyze stuff--

the sheer ferocity of Blood For the Master brings to mind the best Behemoth-- as played by Mötorhead.

Feeling disillusioned? By nearly anything? From organized religion, to society in general?

The sheer rageful rejection of All will fill your soul (ironic thing to say, isn't it, of something so obviously Satanic)....

You may not remember the riffs, but you'll remember the visceral feeling you got from the record, played loud and drowning out your problems.