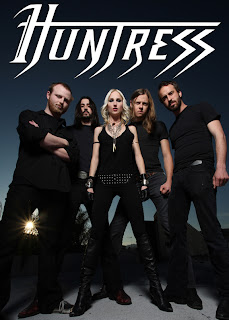 Another powerful female vocalist slams her vocal prowess into my eardrums. This is sinful, sexy brutality in pure ethereal musical form, and oh yeah there are those amazing vocals as well. I think bands like this are riding a wave that began with Doro Pesch and Simone Simons. Beautifully powerful, emotional female vocals surrounded by shred happy precision toned instruments. This is the future of symphonic metal.

Enter the Exosphere: Great introduction to the muscianship contained within the band. This is the song that willplayed as you enter your space capsule. Strap in and await the rocket ride into the stars.
Following this is the epic "Blood Sisters". I love the way the instruments flow around her vocals. The sound is crisp and raw. In your face vocals both hard and melodic intertwined with some ear piercing growls. Powerful. The album has a continuity that only a top notch producer could bring out. Guitar solo is key on this song. Tearing it up and not over saturating the melody of the song. This is high atmosphere song crafting. Sick intense returning vocals screaming from a growling scream into a melody sing a long. Hits you like an asteroid screaming though space.

"I want to Fuck you to death", "Destroy your life" are highlights on this disc. My listening spree to this album was flooded by the spacial journey mindset that Janus says she embarked upon writing. Her voice is like a steel razor. So much energy in these songs that it does indeed seem like a gift from the universe. Some card has been pulled from the old deck, a card of stars

"Starbound Beast" becomes a catchy power metal song and slams you into interstellar overdrive with the guitar solo. Cerebral riffing going on here. Not too much flash, just enough to push this song out of the atmosphere and into deeper space.

"Oracle", And "Receiver" rounding out a killer album that is a message from beyond the infite reaches of the cosmos. Huntress is a band that stands apart from the masses. I have seen video footage of their shows and they are honest and intense. Endorsed by Lemmy by Motorhead....well, that should be more than enough street credit.  When you buy this album, place it high on your cds to be played only on the highway. Hit the gas...set the controls for the heart of the sun and ....burn your way into the universe.