The Single Life - Seven Inches of Fun; featuring The Well and Devil to Pay, 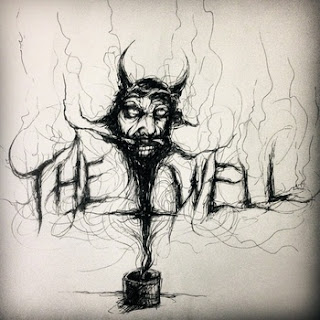 To be honest, at the Ripple, we're rarely the first site to hear a new band.  I think we ahead of the curve with Black Bone Child and I know we turned up Deadweight (now Grel) but those were happy accidents.  Usually, we'll let sites like Soda Shop and Obelisk or Heavy Planet dig up the gems and then we'll simply jump in and enjoy.  The Well is kinda different.  Yes, The Obelisk and Heavy Planet (amongst others) gave them glowing reviews way back last November, but I missed em then, and I really hadn't seen them mentioned too much until I happened to stumble upon them and soon their debut 7" called "Seven" was on my desk waiting for review.

And now I simply can't understand why they haven't had a bigger buzz. In theory, they're not doing anything new.  Heavy, fuzzed stoner rock, plied at a workman's Doom-ish tempo, with monstrous drums and earth-rattling bass.  But looking beyond that, there's something instantly catchy here.  First of all, vocals are almost always done in duo harmony between bassist/vocalist Lisa Alley and guitarist Ian Graham.   Women aren't new to the heavy underground scene, but the perfect blending of their voices, in a lethargic, haze-induced style, coupled with the sonic barrage of massive riffery really elevate "Act II" above the norm.  Sure there's, Electric Wizard influences, as well as Black Sabbath and Blue Cheer, but they're not afraid to play with the formula.  Heavy stoner/dooms scapes bring us in with a mounting ferocity that disintrigrates into a cacophony of feedback guitar before guitar drops out leaving only Lisa and drummer Jason Sullivan in a head bobbing jam.  The song then reinvigorates for some serious riff chopping, before blendng back full circle.  Heavy yet still spacious, it's a great "hello" from the band.

Flipside, "Trespass" brings it's mutated, wah'ed opening before loweing the sonic boom on an extended doom fest of bludgeoning riffs.  Again the dual vocals just add an atmospheric component that really launches this off the "to review" stack.   Gots me really looking forward to what may come next.

Now it seems that The Well is featured on a Metal Hammer cover mount, so attention should be coming soon. 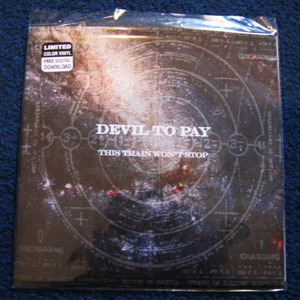 Kind of interesting reviewing this one since Devil to Pay are a Ripple Music band, and I was the one who "found" them initially and fell for their heavy rocking doom (to be precise, the song that slayed me was High Horse, off of their Heavenly Ever After CD).   And technically, these are Ripple songs, as they will be found on the Ripple Music release Fate is Your Muse.  But as CD bonus tracks only.  They're not on the vinyl.  So if you want vinyl versions of these two slabs of volcanic ferocity, this is where you look.

Devil to Pay and the good folks at Glory Hole Records have slapped these two beasts onto a marbled red 7" disc of vinyl and let the music drill right into your solar plexus.  Devil to Pay have a long and distinguished history, but now, 10 years into their career, they sound positively rejuvenated.  Caffineated.  Hyped and renergized.  There's no other way to describe the steam engine of vicious riffing.  There's no way to call this doom, it's simply juggernaut assault of heavy rock with ever mutating riffs, a gale-force of guitars, a Mt Vesuvius erupton of drumming with the molten lava of bass holding it all together.  (How's that for mixing metaphors?).  There's just no other way to describe it, the song charges with a fiendish intensity riding the back of those riffing guitars.  All who know DTP's past have commented that this is most mature and confident Steve Janiak has sounded on vocals, his voice adding a texture and nuance to the song that simply rises it above the heavy rock pack.  Rob Hough's guitar is always tasteful, never flashy, yet still shows off the dexterity of a master.  Chad Prifogle on drums plays out of his skull and Matt Stokes rivets the structure together on bass.  Fast and charging, heavy as fuck, but still melodic enough to eat its way into my auditory cortex.  A helluva song.

Flipside, "Tie One On" slithers out of the speakers with a more mid-tempo, brontosaurs stomp of an introduction (listen for some cool subtle Prifogle drum touches) before the main riff kicks in and we got a doom-laden mutation of an AC/DC romp and raucous.   A song that should easily be able to get the punters rocking in arm-pumping unison in any club in America.  Dynamic time changes, like the mid-song slowdown and harmony guitar part bleeding into another strong Janiak vocal passage show how strong the band is at their songcraft.  And getting better.

Fate is Your Muse is out on vinyl and CD from Ripple Music now, but if you want these two killer cuts on the rotating medium of wax, go to Glory Hole and claim yours before they're gone.