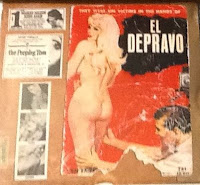 Good times are what await amid the grooves of this way-cool, retro 7"platter courtesy of Ripple favorite Chuck Prophet, James Deprato and Rusty Miller.  As El Depravo, they dish out uber-swinging surf-styled garage instrumental ditties that woulda made the Ventures proud back in the day.  I can almost see the bikini-clad dancers doing the swim, while groovy guys ready the bon fire.  There's a hint of a swingin' sixties London cool to the beach party, with enough fuzz and grunge in the production to appease even the most ardent garage rock fan.  Toss in the cool picture sleeve art and there's just something a touch leery about this 7", which makes it all the cooler. 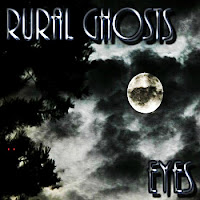 No fancy way to say this.  "Eyes" is a simply gorgeous song.  Carrying with it's perfectly delicate melody, "Eyes" weaves cello and acoustic guitar into its enchanting world.  While all that may sound kinda out of place for music I usually review, in reality, "Eyes" fits perfectly into the world of lost-70's rock that I love.  It sounds like what would be one of the slower tracks on an obscure 70's heavy psych album, with a mythic quality to it gentleness.  A great calm down from all the metal I usually hear.  Second song, "Scatia" is a gentle violin led instrumental that evokes mood and texture of dark gothic nights and painful howls heard across the moors.   Gentle music that any metal fan could be proud to enjoy. 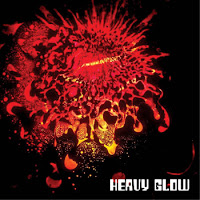 Heavy Glow - Headhunter b/w Mine all Mine

Somewhere between classic 70's era Santana and Cream, you'll find this delicious slice of retro-rock guitar pie.  "Headhunter" simply grooves and slithers in it's mid-tempo glory, undulating back and forth like great sex.  The solo guitar work is so tasty and mouth-wateringly good it really does bring up flavors of Santana. Vocals are mellow and the whole thing just slides on easily.

"Mine all Mine" follows in the same vein with some of the nicest guitar tones I've heard in ages.  Again, rocking but not moving too much beyond a mid-tempo crawl doesn't hamper this at all.  It's a mellow yet vibrant ride.  Perfect for a Sunday morning or whenever . . .

The best stuff I've heard from Heavy Glow so far. 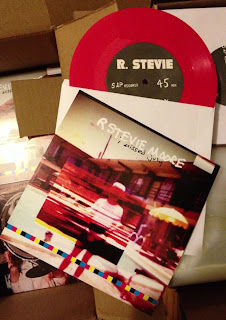 R. Stevie Moore "I Missed July" b/w "Traded My Heart for Your Parts"

Exhausted your search for early Syd fronted Floyd bootlegs? Wish the Kinks had been a little more out there? This record is for you. This record will appeal to the collectors out there for sure, but just the casual vinyl listener can appreciate this gem. While the two tracks were recorded 16 years apart, they are remarkably cohesive in sound – a testament to the consistent artistic vision of R. Stevie Moore.

Side A features “I Missed July”, a tune that would be at home on Floyd’s Relics. A killer “digging in the vaults” vibe. You will feel like you discovered this in one of those musty record shops with the crazy owner and his cat that pisses in the corner daily. You will take it home and discover that it was worth the dig.

Side B offers “Traded my Heart for Your Parts”. Initially this felt like a sort of off-the cuff undeveloped jam, but as it continued I began to appreciate the sunny, hypnotic vibe of this track. Fans of Band of Bees or early reggae would dig this, and it still has that lysergic residue between the grooves

I’m new to the party on Mr. Moore, but he is a legendary home recording pioneer that has released over 400 albums (!) How he slipped under my radar is beyond me, but this is a cool offering to get anyone started. Red vinyl 45 RPM 7”, and thankfully devoid of mildew and cat piss.