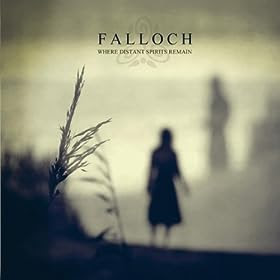 With it coming down to the last days of August, the temperature here in Arkansas is still reaching a hundred and five degrees on some days. After going through the miserable heat wave that took several peoples lives when it got as hot as a hundred sixteen degrees at times, I was more than welcoming winter to completely destroy us and bury me in snow. While the majority of humans will say they love winter during the horrible summers and adore summer when they have to drive to work in the freezing cold, I’ve always been the type of person that could live in the winter-esk conditions, forever. So, what goes good with snow, freezing temperatures and icy roads? If I had to choose a new soundtrack to this coming winter, something that literally embraces winter for everything it is, Falloch’s debut record “When Distant Spirits Remain” is that record that will have you freezing to death.

Creeping very slowly out of the harsh winters of Glasgow, Scotland, this two piece atmospheric/post-rock/folk duo, does a spectacular job of setting a mood and sticking to it. “Where Distant Spirits Remain” paints a picture, a picture that may not make you literally freeze, it will place you in a position of whether or not you should cover up with a couple blankets while this record is spinning. From front to back, this record makes me think of snow mountaintops, lakes that are frozen over and old churches that have been abandon for years. Not to mention, even though this record does have speed and chaos, it’s presented in very small doses and those doses are lethal yet very enjoyable.

The one thing that always came back to my mind while this record was playing is that it’s a soundtrack, it could easily be used in a silent film and even in the background to some films. Even though it can get pretty intense with heaviness and pure

“Where Distant Spirits Remain” is magical, it’s passionate and without a doubt in my mind, this record is the most gorgeous yet honest records I’ve heard in the last several years. Even though I am very confident in knowing Falloch recorded this record inside of a very warm, comfortable studio, I can’t help but want to think that these two guys might of recorded it inside of an empty shack in the middle of nowhere. Now, while several tracks on the record such as “Beyond Embers and The Earth” and “To Walk Amongst The Dead”, may be driven with pure power and heaviness that may lead you to believe these two men could produce a very promising black metal record but  it’s the sections of melody that tug at your heartstrings. In all honesty, for a debut record, I haven’t heard anything as flawless and down right gritty as this record is, that’s just the facts to.

I’ve said it before and I’ll say it again, any record that can place images of beautiful landscapes and monstrous mountain covered in pure white snow, that record deserves props on many levels. Hell, even a record that could sooth everything out in my life and tell me everything is going to be okay, that’s a record that will stick with me for a very long time. So the final verdict is this - seven tracks, that’s all this duo needs to give you before you fall madly in love with what they’ve done on this record. Some might argue that Falloch seems to be confused as to what genre they want to be but at the end of the day, you can call them what you want, folk, post-rock, black metal with folk influence, all I know is that Falloch has created a masterpiece, hands down. “Where Distant Spirits Remain” – The one record that can kidnap you and place you into a better situation than you might be in right now.