The Black Metal Butterfly Effect 2 - featuring Of Wrath And Ruin

Sam, Bradley and I winked back into existence in the middle of my basement.  After the transit disorientation faded I took inventory of myself and happily discovered that I was one hundred percent intact.  It was exactly one week since we had travelled in time back to the year 2010 on our mission to alter musical history.  Personally, after discovering Ghostfog, I viewed our first foray into the past as a smashing success!  I firmly believed that when we returned to our own time the landscape of popular music would be wholly changed.

“Phillip where are you?”
“I’m over here on the couch Penfold.”
“Ah, yes.  I see that now.”
“How was your trip?”
“Oh Phillip, it was great!  We accomplished so much, or at least I think we did.  Tell me the name of the biggest black metal band in the world.  I need to know!”
“Ummmm, there really isn’t one.”
“What?!?”
“Yeah, people don’t really listen to black metal in 2150.  Penfold, you know good and well that the four of us are the only real black metal fans left in the world.  Why rub it in?  As far as I can tell, you guys did not accomplish much of anything back in the past.”

In my haste I had forgotten that Phillip, having not gone back in time with the rest of us, would change along with the rest of the world based on our manipulations of the past.  Of course he would not observe any differences in the world around him.  Only Bradley, Sam and I would be able to spot changes but I was too impatient at the moment to explain anything.  I needed information!

“Phillip.  Quickly, tell me when black metal began to decline in popularity.”
“Is this some kind of test Penfold?”
“Not really Phillip, but you have a knack for remembering such things and I’m feeling awfully forgetful at the moment.”
“Ha!  You’re right about that.  I do have a good memory.  Well, in the early part of 2011 there was this big electro/black metal dance craze that swept the dancehalls of Germany and spread quickly to the rest of the world.  Unfortunately the craze died off after a year or so, and the wave of popularity black metal was enjoying dissipated.”
“Say no more Phillip.  Bradley!  Sam!  We’ve got more work to do!”

I walked over to the time machine, set the destination dial to June 14, 2011, and told Phillip to hit the ‘go’ button.  A few moments later Sam, Bradley, and I once again blinked out of existence.  My goal for this second trip was twofold.  One, I wanted to extend this dancehall craze that Phillip told us about.  And two, I wanted to find a band or artist who would excite people outside of those dancehall fans.  Thankfully, no sooner had we arrived than we stumbled upon exactly the right band for the job. 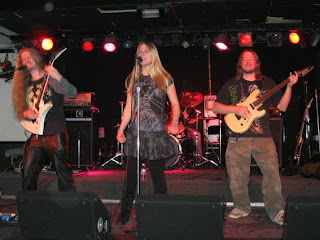 Of Wrath And Ruin  Conquering Oblivion

Oftentimes I wonder.  Would black metal vocals fit well on top of whatever music that I’m currently enjoying?  Sometimes my answer is yes, and sometimes my answer is no.  With these thoughts running through my mind, it was a happy coincidence that I came across Of Wrath And Ruin.  This is a band that clearly asked themselves the same question, and had the wherewithal to follow through musically to discover the answer.  What we waveriders end up with is one enticing metal concoction.

First of all, let’s discuss what kind of music functions as the baseline for this experiment.  Of Wrath And Ruin play a nice mixture of traditional heavy, power, and progressive metal.  Listening to their songs I’m often reminded of Iron Maiden and Dream Theater.  You have frenetic dueling guitars coupled with propulsive drumming.  Add to that the highly emotive, powerful, clean female vocals of Laura Tyburski and you have an enjoyable offering.  But wait.  This band decided to make one important addition that would make them distinct.  That’s right waverders…black metal vocals.  This music takes on an entirely different character with the impassioned growling from lead vocalist Pat Brose.  It’s different, and it’s good!

“Forever Unseen” sets the stage for what’s to come getting the blood pumping with intricate guitar lines, structured yet frantic drum fills, and keyboard flourishes to help set the proggy mood.  The black metal vocals may take a minute to get used to in this context, but trust me, they fit right in.  The other songs on the album are all solid but my personal favorites are the chug-tastic “Shame Is The End”, and the seemingly bipolar “Waters Of The Corrupt”.  Also if you need a break from the speedy metal, try on one of the two beautiful instrumentals, “Sapphire Sea” or “To Walk Alone”.

Very nice.  Very nice, indeed.  All of you waveriders seeking something a bit different from the progressive/black metal norm need look no further.  Of Wrath And Ruin has arrived.

Horn said…
It is a weird, yet almost certainly inevitable, idea that black metal will one day be as esoteric and largely-unheard as, say, medieval madrigals are today.