The year is 2150 AD.  Yes, the human race still exists after 2012.  Historians finally realized the Mayan calendar ended simply because they ran out of building materials, room to continue, and willpower at the exact same moment in time.  In fact, the human race has never been better, a statement which sadly cannot be extended towards one particular musical genre; black metal.  Black metal has been steadily declining in popularity since the mid 2090s.  Sadly few true supporters remain to keep the dark flame alive.  Okay look…that last statement might be misleading.  At last count there were five black metal fans left in the world.  There’s me and four of my friends, who also happen to be my bandmates.  Wait…scratch that.  I just got a video message from Larry.  He’s quit the band to pursue pop stardom on this season’s Earth Idol.  Right!  So then there were four.

A lesser fan might be discouraged, but not me.  I have been working out the kinks on a brilliant plan to revive my beloved black metal music, bringing it to more appreciative ears than ever thought possible.  The plan is this.  Use the time machine that I’ve built in my basement to transport myself and two of my bandmates back to the year 2010.  Once there, we will split up, seek out like minded musicians willing to experiment with the standard black metal template, and help promote them to no end.  Thus we will expose music which breaks free from the well established black metal mold by drawing on other influences and genres, and thereby bolster the black metal fan ranks.  Unfortunately, there was one major flaw in my brilliant plan.  I had three remaining friends/bandmates/fanatics, and only two back-in-time positions to fill.  One of them would have to stay behind to monitor the others’ progress and return us to our new and improved present day.

“Wait a second Penfold!  Why aren’t you including yourself when you talk about who has to stay in the present?  That’s not fair!”
“Yeah!  Why is that Penfold?”
“That’s right!  How come Penfold?”
“Sam, Bradley, Phillip…calm down.  Look, I didn’t want to play these cards but if you’re going to act this way let me remind you of a couple of things.  One; I came up with the plan in the first place.  Two; I built the time machine.  Three; I’m the most fanatic black metal fan out of all of us.  And four; think about it.  You know based on my past indiscretions that I cannot be counted on to abide by the proper schedule required to safely monitor the progress of those sent to the past.  You all know this.  So yes, it’s not fair.  Guess what?  Life isn’t fair.  I’m going back to the past and that’s final.”
“Okay.”
“Fine then.”
“I guess that makes sense Penfold.  But who has to stay behind?”
“Well Phillip I’ve been thinking about that quite a bit.  I hate to break it to you my friend, but you have to be the one to stay behind.  You’re the best drummer I’ve ever played with, hands down.  You keep time like an atomic clock and you willingly practice everyday, far more than the rest of us, constantly honing your craft.  We need you to apply that devotion towards this new task.  Can you do this?”
“Oh for the love of Pete Penfold!  You know I can’t stand arguing with you.  You’re always right, and even if you’re not, I still lose the argument!  If I have to be the one to stay behind, I guess I have to be the one to stay behind.  I don’t like it, but you can count on me to do what’s necessary.”
“Thanks Phillip.  Sam?  Bradley?  Ready to go?”
“Uh huh.”
“I was born ready.”
“Alright.  Best of luck to each of us.  Phillip, push the button.”

Phillip obeyed my command, and the three of us seemingly winked out of existence.  Little did I know that what awaited us in the past would exceed my wildest imaginations. 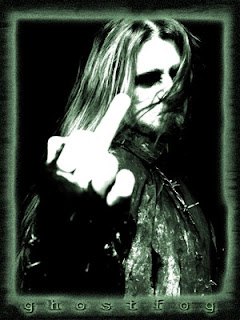 Have you ever wondered what a new wave electronic band from the late 1980s would sound like if they began playing black metal?  Well wonder no more waveriders because Ghostfog is here to demonstrate exactly that.  This one man musical dynamo hails from Germany, which I find somewhat fitting based on the discovery of other interesting artists who call that country home (Beehoover comes to mind).  Hear Them Whisper is Ghostfog’s latest release, and its thirty minute assault on your senses is not something you will soon forget.

Take the opening title track.  It begins very pleasantly with a slightly discordant guitar line which, coupled with clean vocals, would not be out of place in a lovely ballad.  But one minute into the song underlying tension is introduced behind the guitar, and twenty seconds later the sound of amplified guitars and booming electronic drums explode out of the speakers.  The sonic tension is ratcheted down for a moment before the demented vocals strike, slithering into the listeners’ ears and ensuring that no one mistakes this for a pop song any longer.  Oh no, this is definitely black metal!  Black metal with an inventive sonic blueprint, that is.

Rest assured dear waveriders.  The rest of this EP/album does not disappoint.  In fact, I’m transfixed every time that I listen to this music.  “The Night After” could find a happy home in dance halls with its propulsive backbeat as long as the mood of the hall was somewhat gloomy.  “Hear Them Whisper II” transitions back and forth from pretty keyboard movements to grungy, atmospheric portions driven by the same drum pattern as Nine Inch Nails’ “Closer”.  “December Nightingale” utilizes the most organic, non-electronic sounds on the album to great effect, and “Hear Them Whisper III” is…well…you’ll just have to listen for yourself to find out.

Head over to http://ghostfog.bandcamp.com, take advantage of the free download, and prepare to get your electro/black metal groove on!