February 21, 2011
Gods . . . it seems like forever since I’ve had to use a seemingly lethal dose of heavy metal to get my ass roused out of bed, especially on a Monday morning (I love Mondays!) But nevertheless, this particular Monday morning, the bones were a little more stiff . . . the muscles that much more achier . . . the head crammed with more cobwebs than usual . . . it was a morning that just seemed best fit for the aggressive crunch of guitars set to hyper-distortion, drums cranked up to four times faster than the standard rock fair, and vocals so possessed by the devil that the smell of brimstone permeates from the speakers. Either album will get the blood flowing, and both played back to back is a concoction akin to a 5-hour energy, two tall cans of Monster, a case of Red Bull, and a venti latte with a couple of espresso shots. WHAM! See the colors rush back into your world! 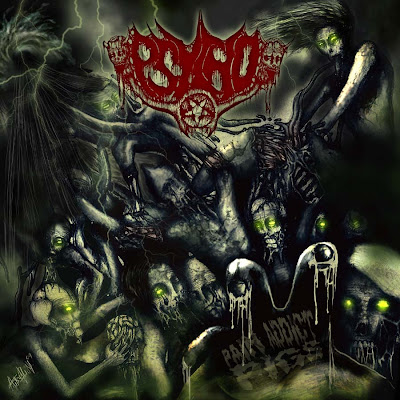 Psycho – Pain Addict Pigs
With song titles like “Meat Slit Grinder”, “Dr. Satan”, and “Lords of Slaughter”, one would think I would have be better prepared for the aural assault that I was about to undergo. No . . . no . . . I casually pushed play on my listening device of choice without a care in the world, almost as if I was expecting silence to continue coming out of my speakers. The first sound that came seeping out, however, was creepy wind sound effects and a few backward voices uttering something incoherent, yet in tones that were undeniably dastardly and filled with ill will. In classic metal fashion, as soon as those voices faded back into the gloom, the music burst out and the bludgeoning began in earnest. But rather than casually stumbling into a crossfire of blastbeats, I found myself in the midst of a circle pit, elbows up to protect my fragile noggin from the miscellaneous haymakers and randomly hurtled shoes. The double bass drums were thumping like the heartbeat of America’s disenfranchised youth and the groove quickly had me rushing in time, high stepping my way to oblivion with my metal cohorts of destruction. The title track from this album has less to do with the black metal that we’ve all come to know and love/hate, but more to do with the crossover thrash of the mid to late 80’s. Yeah, it’s dark and fast and heavy and demonic, but the typical black metal elements are lacking . . . and honestly, I’m okay with that. I’ve always gravitated to the groove more than screeching hypersonic ministrations of Satan’s minions anyway, so Pain Addict Pigs is a welcome change of pace!
Most of the tracks on this album are mid-tempo moshers with bursts of speedy destruction, and the intensity that this Singapore outfits brings to the mix feels authentic enough and not like these guys are trying to fit into some scene that they read about in a local ‘zine. The dynamic shifts in the music are great, key into “All Are Dead” and bob along with me to the next track. Psycho are heavy and murderous, but inject just enough class that you are forced to take them more serious that you might have thought on the outset of this journey. Listen to the guitar work . . . great solos, not just in execution and production, but also in creativity. Yeah . . . the more I listen to this album, the more it sinks into my being.
Further highlights on this gem are the aforementioned “Meat Slit Grinder” and “Lords of Slaughter,” the former track with its diabolical intro and mid-tempo sludgery, outstanding guitar solo, and esophagus rupturing vocal attack, serves as notice to the metal world that there’s a new cast of bastards ready to bust skulls. The sinister “Lords of Slaughter” opens as an out of control rolling war machine bent on the destruction of all living beings and then shifts into a bouncing moshable ode to murder that will have you retching from the constant torque you’re putting your body through. Don’t even get me started on “Mater Lachrymarum . . . Mother of Tears.” Fucking brilliant! As I listen to this beast over and over again, I keep looking for similarities to others and I can only find a few . . . Lamb of God, Gollum, Lair of the Minotaur . . . all bands that I’ve come to adore for their complete and utter disregard for human safety in the creation of the music. High marks for Pain Addict Pigs!
http://www.myspace.com/psycho.official
Buy here: Pain Addict Pigs 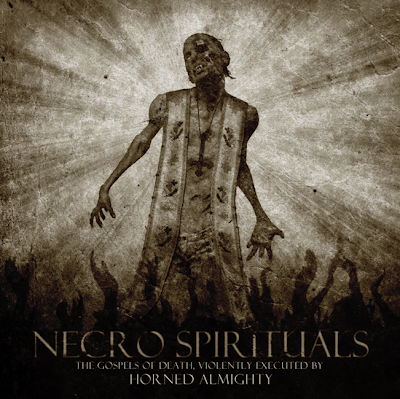 Horned Almighty – Necro Spirituals
Where Psycho comes across as a hyper, out of control adolescent simply reacting to the world in an organic and natural manner, Danish metal outfit Horned Almighty are more focused in their assault on our senses. Necro Spirituals is as irreverent an album (and Horned Almighty a band) that I’ve heard in awhile, incorporating thrash-y elements with big waves of blackened death. Again, no massive flurry of blastbeats, but dense walls of double bass drums, a steady barrage of guitars, and phlegm hurtling vocals . . . so, with all of that, I’m having a hard time resting these cats next to the black metal legends, but I’m okay with that. Horned Almighty immediately reminded me of Norway’s Khold because of the pure heaviness of the music and the mid-tempo pace they use opposed to the breakneck race so many seem to go through to get their message across.
“The Age of Scorn” is a great example of how Horned Almighty weave so many different elements from so many different sub-genres of metal . . . and this morsel is only three minutes long! It opens in a flurry of chaos, kinda’ blastbeat-ish, but more staggered and technical, the guitars shift from super speedy to monstrously chunky with every tempo shift . . . and then the song moves along in an up-tempo fashion, rolling along like a stampeding herd of cattle, decimating everything in its path . . . then breaking down to a heavily distorted bass groove before kicking into high gear again. Then, midway through the tune, they shift gears again, pushing the guitar more into the front of the mix to give the track a more death n’ roll vibe, and then back once again to the stampeding frenzy. Damn . . . steamroller!
There’s not a track on Necro Spirituals that lacks, the whole album is a high octane thrill ride of devastation.  The title track, “In Jubilation and Disgust”, “ Illuminated Void” and monolithic album closer “Absolved in the Sight of God” are the stand out tracks, though there really isn’t a song on this disc that I’d ever turn off if it came on. Though there isn’t much deviation stylistically, Horned Almighty have crafted a bludgeoning classic of deathly metal that flirts with accessibility despite its absolute irreverence. The sacrilegious aspects of the album will forever entrench Necro Spirituals in the darkest crevices notched within the abyss, and from time to time, one may even hear the faintest “Ooohh . . . Yeeeaahh!” from Tom G. Warrior. With an album like this, coffee is so passé!
http://www.myspace.com/hornedalmighty
--Pope

Penfold said…
Pope, Pope, Pope. You are right on with these two albums, especially Necro Spirituals! Took a listen and it crushed me! Another reason I don't need coffee.
February 22, 2011 at 6:46 PM