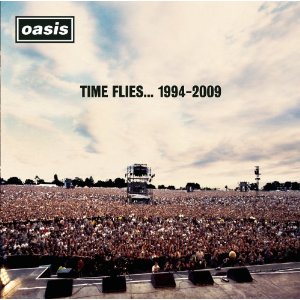 Every generation has a band that defines their era. Fortunately for my generation, Oasis is that band. Some might argue Radiohead clearly defined the 1990s, while others might say Pearl Jam, Nirvana or even a different band. Only Oasis has consistently remained remarkable all throughout their career thanks largely due to their amazing songwriting capabilities. The early 1990s saw the emergence of alternative and grunge music as mainstream music. When grunge and Nirvana disappeared, Oasis was one band ready to take the torch.
Could it really be 15 years ago when I was first introduced to Oasis? As the name of their new singles compilation, Time Flies:1994 -2009, implies, that’s true. Looking at those words on the screen I am still shocked it has been that long. Still, Oasis remains one of the most talented rock n’ roll bands around.
The album celebrates Oasis’ entire body of work. Oasis has sold over 70 million records worldwide and their legacy still remains strong even after Noel Gallagher left the band in August 2009. Beginning with their debut single “Supersonic” to the final track “Falling Down,” the album is jam-packed with 26 irresistible singles.
Music was revitalized readily by two brothers named Liam and Noel Gallagher in the early 1990s. Oasis breathed fresh air into the music industry and gave birth to Brit pop. Although they despise the term, like the Beatles during the British Invasion of the 1960s, Oasis opened the door for other British pop bands during the mid to late 1990s. Their presence helped open the door for future European pop bands to cross over into America. Magnetic, majestic and mesmerizing, they sold millions of records to become one of the best pop bands in the world.
Listening to their music now I can’t help, but get taken back to when I first heard that particular song when I listen to the album. Their breakthrough song, “Wonderwall” is arguably my favorite song, but more importantly, the song that introduced me to Oasis. From the moment the song begins I am immediately transported back in time to fall 1995. Oh, what a feeling! How many bands have that ability?
Unlike most contemporary compilations, Time Flies, is an engaging, entertaining and eclectic album that comes across as a concert set list instead of  “a greatest hits album.”  Energized by memory filled tracks like “Supersonic,” “Don’t Look Back in Anger,” “Lyla,” “Live Forever,” etc. this is a definitive album every 1990s music aficionado should own. Call me crazy, but this is a must own album.
Time Flies does include two previously unreleased tracks “Lord Don’t Slow Me Down” (2007) and “Whatever” (1994), but for Oasis haters, they will criticize it’s mostly “A” side tracks and misses what the Stop the Clocks album accomplished by having more obscure/ “B-side” tracks. Sure, that’s true, but not everyone is interested in bootleg and/or obscure songs. If you’re an Oasis fan this is a must own for your collection.