Celtic Frost - Into The Pandemonium 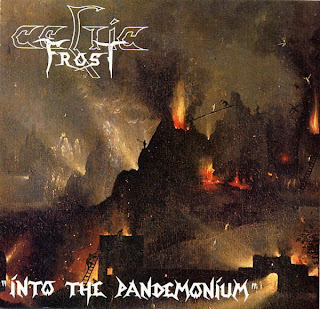 An album title should give the listener an idea of what they’re getting into and very few albums have as fitting a title as Celtic Frost’s second full length studio release from 1987, Into The Pandemonium. From the album cover and Hieronymus Bosch’s interpretation of Hell to the sonic mélange infused within the grooves, Into The Pandemonium is the full package of chaos, ominous despair, and overwhelming persecution of the senses. In the mid to late 80’s, metal bands simply weren’t supposed to incorporate anything other than guitars, bass, drums, and vocals to a mix. Eh, you might get away with a few sound effects, but no one . . . absolutely no one mixed in violins, operatic female vocals, techno beats, and electronica over the fundamental instruments, nor orchestrated all of the sounds to such epic proportions as Celtic Frost.
If you’re not familiar with Celtic Frost, you need to know that this Swiss outfit is viewed as one of the godfathers of the modern death metal/black metal circuit, so that should give you an idea of the extremity of the music. Though the band is traditionally metal, Into The Pandemonium crosses boundaries into various other genres. They use terrifying imagery and menacing tones to convey their messages of doom, but in the case of Into The Pandemonium, they pushed the experimental envelope and fused the aforementioned musical elements into their sound. Used as pieces of textural intrigue or sonic special effects, these added vocals and untraditional instruments are used tastefully to enhance the music and are not the true basis of the songs . . . the songs are still rooted in detuned, sludge-y, and dark heavy metal. The textural embellishments act more like visual effects to enhance the story of a movie like Star Wars rather than the sole purpose of the song. They’re the color of a spectacular painting.
The album opens with a monstrous and brutal rendition of Wall of Voodoo’s alt-pop classic, “Mexican Radio,” and we, as listeners, get that opportunity to both raise our eyebrows in surprise and smile in pure joy. Full of Tom G. Warrior’s classic oooh’s and grunts, the Celtic Frost signature guitar tones, and thundering metal attack, “Mexican Radio” takes on a whole new vibe. There’s still an air of fun to the song, but there’s something a little more sinister in the background vocals at the chorus and when Warrior makes mention of eating barbequed iguana. Celtic Frost’s interpretation of the song is downright cool and I’m a little surprised that there wasn’t a bit more use of this song in cinema or some other media outlet. 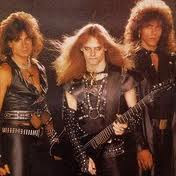 After the intro of “Mexican Radio,” things get dire. “Mesmerized” kicks in with its huge waves of sustained chords and Warrior’s vocal approach is haunting as he sounds like he’s suffering some mortal injury. Over the dense guitar tones, this vocal approach is the kind of shit that freaked me out the first time I heard it, and odds are, it freaked out a bunch of other kids too. In time though, I’ve grown to appreciate this atonal croon and feel that without it, the song would be rather humdrum. Now, take all of this menace and these sounds of suffering, and mix in a subtle operatic female voice in the background . . . damn. It’ll make your blood run cold. The band does a great job of mixing up the dynamics of this one, as well . . . shifting from the heavy sustained portions where the music has the air to breathe to tighter riffs and polyrhythmic drum patterns to create a greater element of chaos.
“Tristesses De La Lune” is more of an interlude, but it shows the band using a healthy dose of violin, female vocals, and understated guitar riffs. Within seconds of this haunting tune fading out, the Celtic Frost that has laid down the groundwork to sonic decimation returns with what is quite possibly my favorite song from the album. “Babylon Falls” is a full on thrashing Frost classic. The intensity of this song is one that’s best experienced, but until you get the chance to do so, I’ll touch on a few of my findings with it. The opening guitar riff pretty much sets the tone with its gritty and dirty distorted tones, acting as the foundation for the rest of the band to do what they do best. The bass and drums crash in at the perfect times for maximum effect, and Warrior’s vocals spit with the most potent of venoms. The beat on this track is insane, falling somewhere in that off time category of prog, but still driving at the same time. Note how the band drops to the overpowering mid tempo riff at the chorus . . . it’s great example of dynamic use. Though “Babylon Fell” stands well on its own as a metal song, the inclusion of the crooning and textural elements does that much more to enhance the listening experience. 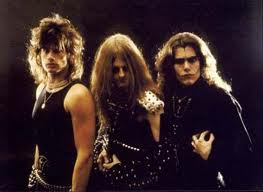 “Caress Into Oblivion” is an immaculate musical journey across desert wastelands. Introduced by a Muslim call to prayer, the song pummels the listener into their own oblivion . . . one moment oppressed by the overwhelmingly heavy tones, the next moment jettisoned across time and space by an up tempo groove and interstellar guitar solo. I absolutely love the polyrhythmic drum patterns that they incorporate throughout this track. They add an exotic element to the music that, with the aid of swirling smoke, takes me to an island within myself. Amazing song!
Celtic Frost then does the genre crossing thing with “One in Their Pride” and “I Won’t Dance.” The former is a drum driven techno/electronica tune that features samples from various NASA space missions. Definitely another one of those eyebrow raising moments as most people are expecting more metal and not some quasi-industrial dance track. “I Won’t Dance” is about as accessible or commercial that Celtic Frost ever got. Well . . . with the exception of the disastrous Cold Lake album. But we’re not talking about that one right now. “I Won’t Dance” has a great melody to it and a very memorable chorus, but the band never sacrifices their metal intensity on this one. The riffs are still heavy, the vocals are still laced with agony, and the drums are explosive. In truth, it’s pretty fascinating that they were able to mix in such a melodic chorus within all the rest of the chaos thrashing about.
Into the Pandemonium is far and away my favorite album from Celtic Frost. Having listened to this one over and over again for the past twenty years, it’s become part of my being and despite it’s avant moments, it feels like a natural progression for a band who was so rooted in traditional heavy metal. Definitely the bands high water mark, Pandemonium is one of those albums that gets better with each listen, mainly because there’s so much going on that it’s impossible to pick up all of the intricacies on the first run through. I also appreciate this album for the fact that the band stretched themselves to the point of collapse to create a work of art. Sonically detailed and extravagant, listening to Pandemonium is like staring at a painting for hours on end, adjusting your eyes to pick up the subtle use of brush stroke, color, and texture. In this case, we’re not adjusting our eyes so much as our ears, keying in on the background elements that inspire the foreground actions. I hope that in another twenty years that I’m still finding something new buried deep in the mix of this album.  -  Pope

buy here:  Into the Pandemonium

An absolute classic (though I prefer "To Megatherion"), this is THE album that created the category known as "avant-garde metal".

A lot of their inspiration came from artwork and poetry. Tristesses De La Lune (Sorrows of the Moon) is a word for word recitation of the 19th Century poet Baudelaire's poem of the same name, from a collection titled "Les Fleurs du Mal" - The Flowers of Evil. The poems within are about sex, eroticism, and death. Once you know a little about the poet and the poem, the song takes on meaning as more than just an interlude. Tom Warrior and Martin Ain really did their homework on this stuff.