A Tsumani of Ripple Bursts – Featuring The Living Wrecks, Balance and Composure/Tigers Jaw, Moth Circus, Batusis, and The Candy Snatchers

Different format for this post.  Tons of great music, so little time.  Quick tidal shots of some of the highlights. 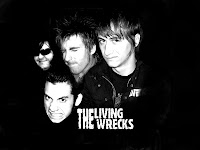 Forget Green Day.  This is punk.  This is what it’s supposed to sound like, directly descended from the loins of the Sex Pistols, fertilized by the dirty seed of Richard Hell and the Voidoids, spat out from the womb of The Germs.  This is true “blank generation” punk, a whirling dervish of buzzing guitars, snotty vocals, self-destructing sneers, and generous gobs of hooks and gangland chants.  With song titles like “Midnight Disaster,” (a fucking killer tune), “Living Hell,” “Getting Sick” “Outta Control,” Self-Destruct” and “Worst Enemy,” it’s clear these guys live it as hard as they play it.  No Gilman Street posturing here, the Living Wrecks are the real fucking deal.  Or as they say in their ballsy blitz of punk mania, “Living Hell,” this place is a living hell/no better place to be/this place is a living hell/it’s the only place for me.”  I agree.  Buy it.  It’s perfect in all of it’s intentional imperfections.

Two bands familiar to waveriders and two bands on the rise.  Emo, post-rock, indy.  I don’t know what to call it.  Loud, pounding, intricate, sincere.  It’s earnest rock, free of pretense, full of passion.   Balance and Composure launch the set with their emotionally bare, angst-rock outpouring.  Guitars layer like slightly misfitting bricks, all edges and jagged outcroppings.  Jon Simmons voice braces on the verge of destruction as he vents his emotional soul through their five cuts.  Tigers Jaw take over side two, bringing a bit more finesse and post-punk charm to their tracks of tension and release.  Guitars build and interlock, bass percolates like a bubbling lava pit, drums lay down the foundation.  A bit more mature in approach than Balance and Composure, Tigers Jaw aren’t afraid to experiment with textures, melodies and that all important silence.  Dual vocals top it all off, like a hint of light eking through the darkness.  Both sides deliver.  The potential evident for the future. 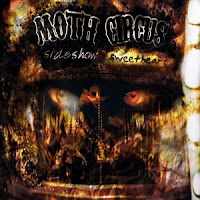 Building on the momentum of their Ripple-loved EP last year, Norway’s Moth Circus come rampaging back on the metallic shoulders of a whole heap of 80’s and 90’s metal influences.  Living as if they’d been marinating in early Crue, nascent Metallica, some 90’s nu-metal crunch, and whatever came to them in their worst nightmares, Moth Circus take those influences, toss them into a blender and hit frappe.  “Dreamland,” simply rocks, no other way to describe it.  Massive guitars and a killer, sing-along-til-you’re-hoarse chorus anchors this baby.  “M.I.A” lassos some definitely cool guitar textures on top of the metallic guitar crunch.  Title cut “Sideshow Sweetheart,” brings in a stunning acoustic, neo-Arabic guitar part that could’ve come from System of a Down.  Metal for the thinking man who still wants to pummel his grey matter within an inch of its existence.  Seems these cats just keep getting better.

Ok, what happens when you take a couple of punk rock legends, plug their amps back in and give em free reign to re-explore the insanity of their youth?  Batusis results.  Named after the clumsy dance Adam West did on the old Batman television show, Batusis unites legendary surviviors, Cheetah Chrome of the Dead Boys with Sylain Sylvain of the New York Dolls and all sorts of punky, classic rock mayhem results.  This 4 song EP is their debut, but judging by the weighty balls these guys can still drop into their music, a full-length album can’t be too far behind.  Forget aging,  these guys found the fountain of punk-youth and blast out four bluesy, punky, rockabilly nasties.  “Blues Theme,” is just that, the blues as filtered through the Cramps or Tiger Army.  “What you Lack in Brains” is a bonafide barnstorming ode to every airheaded vixen the guys ever met, featuring the classic lines “What you lack in brains/you got in looks/a grown up doll, she never picked up a book.” “Bury You Alive,” picks up the ferocity, tearing off with barely contained abandon of classic, crunchy guitars and nastiness, while “Big Cat Stomp,” is about a cool an instrumental piece of punk rave up as one can get with some simply inspired, gritty guitar.  Age is meaningless.  Rock knows no time limits.  Everyone, dance the Batusis. 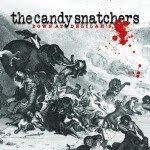 The Candy Snatchers – Down at Deliah’s

Ugly, dirty, and mighty unclean.  The Candy Snatchers were infected with some horribly contagious, disease of poor hygiene and they wanted nothing more than for you to wallow in their sickness.  This album almost didn't make it.  When their guitarist died of an overdose in 2008, the band shelved this album and sadly disbanded.  But thanks to the folks at Drug Front Records, the album was resurrected and we're all a little better because of it.  Dripping with phlegm, sputum, and other bodily fluids, the Candy Snatchers belch out another bucketful of dirty, filthy, speed punk, and somehow everything’s right with the world.  Forget the nation’s failing medical system, these germ-infested outbursts of noise pollution are enough to drive the stake of illness into the hearts of the weak.  You really can’t go wrong with songs like “The World is Wrong,” and “Huffer.”  And how can you ever question the brilliance of titles like “Run Jive Turkey, Run!” “You’re So Beige,” and “She’s a Real Asshole.”  RIP Matthew Odietus, your swan song was a master stroke.  Anger, snot, and things coughed up from tobacco-stained, mucous crusted orifices, to this day there still is no cure for the Candy Snatchers..  Dive in.  Catch the disease.