Necronomicon - The Return of the Witch

I’m not quite sure what it is that the guys at Napalm Records are feeding their artists, but don’t start rationing now! Canadian black metallers, Necronomicon have just released their latest album entitled The Return of the Witch and, much like the majority of the stuff I’ve been hearing from Napalm Records, this album made me take pause, stare long and hard at the music player, and immediately lose myself in the sonic splendor of the music. Not for the faint of heart, not for the weak, not for the people who like to start their mornings with a tip-toe through the tulips, Necronomicon is a blastbeat away from cardiac arrest. The music is sheer metallic chaos, darkened and brackish, venom pumping through the veins rather than blood, and it’s performed with an intensity and uniqueness that has made me replay this album three times in a row. The music is nasty, has a dangerous edge to it, but here’s the kicker . . . there’s some melody and musical proficiency thrown in to separate these guys from the bottom feeders of the genre. In fact, I’d start thinking of Necronomicon in the same frame of mind as other black metal genre benders Enslaved, Behemoth, 1349, and even Arcturus, to some degree.
Now, I don’t claim to be some black metal aficionado. Truth is, a lot of BM is too noisy and discordant to keep my attention for longer than it takes them to yell “Blaaarrrghhh!” But I do like the black metal acts that create mood or a sound that is exotic and in contrast to the chaotic blastbeat furies . . . y’know, when a band experiments with tones and ambience and time signatures. Black metal purists will probably hate Necronomicon because this band incorporates some truly excellent thrash moments, as well as slowed down piano passages, and vocal choirs . . . all the elements that I’ve always found fascinating about the genre! On top of all that, the production on The Return of the Witch is one part pristine, which makes the music sound huge . . . the other part very D.I.Y. and raw, as if they were trying to give this recording a live and organic feel. Some might think this combination wouldn’t work, but much like the contrast in sounds and tones from the performances, the contrast in production styles makes this album a stunning piece of ear candy. 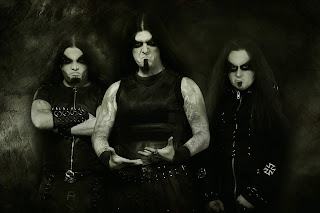 I was sold on The Return of the Witch after listening to the open track. There is so much going on in this song that it’s ridiculous. “Into the Fire” is a five minute explosion of blastbeat tirades, thrashing breakdowns, double bass beat downs, demonic vocal narrations, and angelic vocal choirs. The musicianship in this song is phenomenal, I’m loving how they break the riffs down, do these great chord progressions, don’t rush the song to be complete and just expand on the ideas that they start putting down. You can almost hear how this song came together. It’s as if the three musicians came together to write this tune, found a cool riff in the bag of tricks, then decided to speed it up . . . and then slow it down, and then throw in a cool break . . . and then thought, ‘Wouldn’t it be cool to throw in some heavenly vocals to break up the darkness?’ and then did so.
“The Time Is Now” is the first single and you should be able to view the video below. As you’ll note, the song starts off in a very typical black metal fashion . . . aggressive, heavily distorted, guttural vocals that sound like a dog hacking up a bone, a flurry of drum beats zipping this way and that, but check out the tempo shift right around the 1:13 mark. Notice how the double bass drums lay down this rumbling layer of sound and completely changes the complexion of the riff. Now, to make things even more interesting, listen for the subtle stop in the middle of the riff. WHAM! It’s so jarring and so sudden, yet feels so rhythmically natural. That half second of silence says more than most bands playing a million notes in a ten minute epic. Fucking astounding! 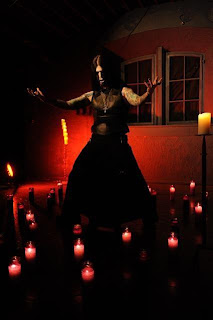 The seven minute epic “The Order of the Moon” is a blistering sonic tonic that goes from immediate and devastating to ambient and liltingly ethereal. The riffs in this song are all over the place and accent well with great drum work. Of particular note, as the song breaks from its initial double bass driven riff and suddenly grooves into the thrashing riff, check out the subtle cymbal accents at the end of the measures. This groove has that the headbanging power to it; heavy, crunching, and laced with a soulful rhythm and swagger. The piano break and haunting sound effects the hover in the background gives this song a massive dynamic quality, the kind of sound and mood swing that lets the imagination wander to fog enshrouded fens and swampland, deep dark places that haunt the soul, haunt the mind. As Necronomicon work their way back into the heaviness, the sounds become oppressive and overwhelming, as if we’re lugging around the weight of our worldly sins, searching in vain to relieve our selves of the remorse.
“The Return of the Witch” and album closer, “Seven” are black metal classic’s with a touch of thrash-y sludge mixed to dirty things up. These tracks may be less dynamic than much of the rest of the album, but they’re no less intense or technically magnificent. Searing guitar leads that seamlessly shift to rhythmic groove and harmonic trickery make up the greater portions of these songs. Throughout these tracks, I can’t help but feel the need to sit in a rune encircled pentagram. They’re just brimming with a dark and evil energy, and I’m certain a small part of my soul is blackening the more and more I listen to this. But, it’s just like porn, you just can’t seem to ever get enough!
The Return of the Witch is black metal just the way I like it . . . playing just outside of the rules that have been previously established. It’s menacing music, but it’s dynamic and filled with intriguing moments of technical brilliance, and Necronomicon injects just enough melody to make things memorable. Don’t get me wrong, I’m not talking about melodies that will have you humming all the live long day, but dancing through the din of darkness and oppressive tones, the band work in melodies that act as a guiding light of hope. Experimental to some degree, but not to the point that they’re shoving their heads up their collective asses. Necronomicon push the envelope on their expressive nature and they forge some new ground that I’ve found beyond interesting, hell . . . I find it addictive!  -  Pope JTE

Buy here:  Return of the Witch

This is the most perceptive review I could ever hope to read about this insanely accomplished band! Great work Pope JTE! As I was just saying on the Napalm Records Youtube Channel, "Pick up their albums "The Sacred Medicines" and "Pharaoh Of Gods" as well as the current release "The Return of the Witch", all their releases are worthy purchases. A band that excels in Death and Black Metal styles while bringing its occult and musical depth to a level few bands have ever achieved." In other words, I'd have to agree 100% with your review, but do yourself a favour and check out their other albums as well if you haven't already!

Necronomicon also have their own Tube Channel at youtube.com/user/necronomiconmetal