A Sunday Conversation with The Atlas Moth 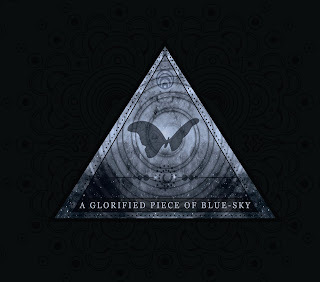 Catapulting itself into the number 2 spot on Pope’s year end best of list, the Candlelight Records debut from The Atlas Moth, A Glorified Piece of Blue Sky, became so revered that two copies of the blue vinyl disc have made their way into the Ripple collection. But the real question becomes, why is it so revered? Is it really that good? The short answer is yes. For more details, we lured Stavros (guitarist/vocalist) to spend a few minutes on the red leather interview couch. Sit back and find out what The Atlas Moth tick.

The music on A Glorified Piece of Blue Sky is equally brutal as it is beautiful, as song writers, how did you know where to incorporate more brutality or to add a line of melody to create such elegant texture? Is it just a feeling, or is there a loose formulaic structure that you use?


Our writing process is very organic. Usually one of us has a riff and brings it into rehearsal and we just jam from there. Very little is predetermined, and we all pretty much write all our own parts, that is just what happens when all of us get into a room and play.


When you write a piece of music, do you consciously write from the mind set of being different than what's out there now?


We don't ever set out to sound like anything. Like I said, everything is very organic and felt out through repetition during rehearsals. There is not much thought put into what we are going to sound like although, there is a lot of scrutiny over an end product. We tear apart songs and start over and rewrite sometimes until we are happy with them but there isn't a constant thought of trying to be different, this is just what we sound like. 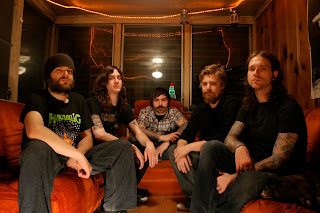 When I reviewed A Glorified Piece of Blue Sky, I described your music as the best horror movie that I’ve ever listened to. Was I supposed to be scared or was simply jumping at shadows? What is you musical intention? What are you trying to express or get your audience to feel?


We want the listener to feel something. We would rather have someone absolutely hate us than not feel anything when listening to us. Andrew was the guy who did all the interludes and locked himself in the studio during mixing and brought all of that to life for us. This record encapsulates a period of time for each of us personally and as well as a band and I think that comes across and what you're feeling is just what we were going through making that record. How each of us was feeling throughout.


At the risk of sounding cheesy, life in general. I get inspired but reading a book, watching a movie, hearing something said...it doesn't matter. 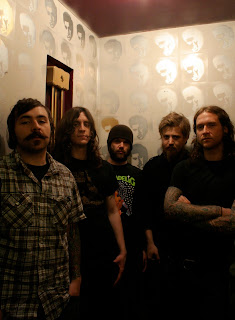 "...Leads To A Lifetime on Mercury." That was the last song written and is by far my favorite. I feel that song currently sums up what The Atlas Moth is.

The business of music can be brutal. Changes in technology have made it easier than ever for bands to get their music out, but harder than ever to make a living? What are your plans to move the band forward? How do you stay motivated in this brutal business?


Well we are still sorta in a transition stage as a band. I have been touring for so long, even before this band, that being broke and on the road isn't really anything new. We are just gonna keep doing what we have always done. We have a pretty busy 2010 touring schedule planned and we're gonna keep busy writing a new record. We love playing in this band and we are all such close friends. As long as this is fun, it’s really easy to remain motivated regardless of people downloading your music. I download music but I also buy stuff that strikes a particular chord and that's what I hope we do for people.

Who are some of the more obscure artists that may have influenced your sound?


I don't really know how to judge obscure as there are a lot of bands I think everyone knows about but I then find out it's not the case. I will say Envy and The Angelic Process. 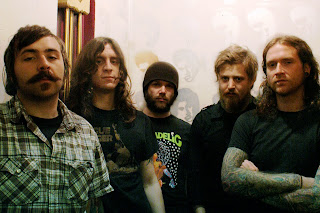 Anyone who has spent more than a couple of minutes in the music business has had a Spinal Tap moment or two. What’s one of your great Spinal Tap, rock and roll moments?


We were given an address of a punk house on tour that we could crash at. These, although appreciated and awfully convenient, are usually some of the nastiest places on earth to crash but it’s always welcomed. We pull up to the address, see a dude that was at the show outside and decide to park. Andrew, Tony, our tour manager Joe, and myself walk into this house and it’s not gross at all. Totally shocked, we all started getting comfortable, people are using washrooms and looking through fridges. I go as far as to get ready to pass out on the couch. At this point, Andrew felt as though he should go out to the bonfire in the back and let the people who supposedly live there know we are crashing in the living room. Next thing I know, Andrew is busting through the front door yelling "WRONG HOUSE! LET'S GO!" Apparently the address we had was a number off and we were supposed to be staying in the rat infested shit hole next door. Duh.


Vinyl hands down. I dig actively listening to music.

We, at The Ripple Effect, are constantly looking for new music. When we come to your town, what's the best record store to visit?


Well as far as metal goes, Metal Haven is the way to go. Vinyl, CDs, Shirts...they have every obscure metal band you have never heard of. As far as everything else goes, Reckless Records has a few different locations that are all excellent.

Any words of wisdom for the Waveriders (our readers?)


"If your bitch is in my shit, then its your bitch you check" - Dr. Dre....Words to live by, friends.
A Glorified Piece of Blue Sky Candlelight Records drone metal extreme metal heavy metal interview post hardcore progressive metal The Atlas Moth The ripple Effect