Forest Stream – The Crown of Winter 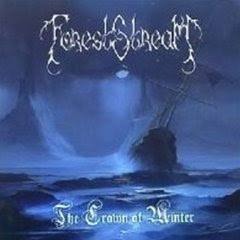 Way back in nineteen eighty whatever, most U.S. adolescents pretty much thought that Russia was just this big land mass somewhere to the east, er . . . west, uh . . . east and west of us, that practiced a pretty piss poor civil rights policy. I know I didn’t know squat about the country other than they had a lot of nuclear warheads aimed at me (I lived in a military town, so it stands to reason that I would have been one the first recipients of said warhead.) It wasn’t until we had all that hoopla of Glasnost and the Wall coming down that I started to recognize the rich culture that Russia had tucked away in its frozen nether regions. No longer was I ashamed of my Russian heritage, and now, I embrace it with a weird sense of pride. So, how thrilled was I when I received the second full length release from Forest Stream through some contacts with Candlelight Records? About as thrilled as when Alex Ovechkin scores a goal!
For years, I’ve watched the Scandinavian countries produce one epic metal band after another. I’ve seen Greece produce more than its fair share of stunning power and doom metal. Recently, France has blown up with its low end fueled experimental sounds. Is it time for another wall to come crumbling down? Will Russia be the next great land of heavy metal expression? Man . . . wouldn’t that be something! 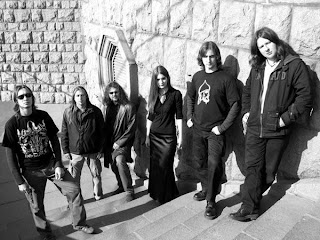 The Crown of Winter is deathly metallic and ethereally ambient at the same time. Forest Stream work in great musicianship to their complex and highly emotive compositions. In a lot of ways, this album can be thought of as a thinking man’s record, because there is so much going on in the way of shifting textures and haunting moods. There are massive time changes, odd time signatures, and heady themes that make this disc quite comfortable nestling up next to your favorite prog-metal albums. Is it totally fresh and original? Sadly, no. But the music is performed at such a high level that the Opethian melodies and Akerfeldt-like vocal barks don’t bother me as much as they would if performed by a less than able unit. Yes, there are Opeth similarities to the sounds, and by no means does Forest Stream come across like a cheap knock off of the Swedish metal masters. There’s something else a bit less tangible mixed into the music that gives these guys their own individuality, a strange new voice in way of modern metal.
After a beautifully emotional ambient build up as an introduction, Forest Stream launch into the eleven and a half minute title track of the album. Huge waves of distortion crash down upon the delicate plinking of the piano keys, cannon fire drums punch holes through said wave of guitars, and then the instruments swim like a playful school of fish, darting around one another in a roaring sea of sound. The vocals join the dance with a strange sense of sadness, suddenly making everything seem so desolate and hollow. Then, in classic death metal fashion, the vocals shift to that of a perturbed and unfed bear fresh from its winter hibernation. What a great dynamic shift! Amidst the flurries of metallic notes soaring through the soundscape, various melodies weave in and out of the chaos, sending this song to some higher plain. Then, it all goes away. The storm vanishes and leaves us hearing a gorgeous clean tones guitar plaintively strumming chords over a huge synthesizer passage. Absolutely beautiful work in how the band wrapped all of these sounds and themes around each other to create such an epic song! For all intents and purposes, this has to be categorized in with prog-metal, and some of the finest that I’ve heard. 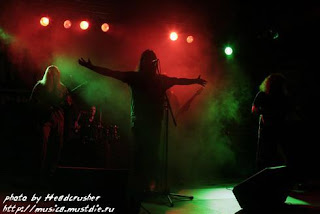 Following the album opener, “Mired” bursts from the speakers with double bass drums afire and a triumphant melody line to lend an interesting contrast to the barrage of death riffagry, and then . . . whoa. Forest Stream lay down a mind blowing goth-y sort of soft passage filled that has shades of Katatonia mixed in the emotion. It’s dark and eerie, bordering on creepy. The kind of music that might work well in digging a grave to bury one’s lost beloved. Though this moment is short lived, the oncoming death metal pummeling is a perfect fit and moves the song along nicely. The vocals and melodies on this track remind me of Opeth, blackened in a fiery pit of hate and individual torture. The clean toned guitars towards the middle of the song fooled me for a brief minute into thinking I was hearing a piano adding further texture. Awesome! Way to keep me guessing! I absolutely love it when a band challenges me with the use of sounds and odd time arrangements. Nothing sucks more than predictable music. Well, other than utterly terrible music.
It’s basically like this, folks. The Crown of Winter is progressive death metal. That’s about as simple as I can put it. Ultimately, this album is an example of excellent execution in composition, musical arrangement, and instrumentation, all of which make up for the music’s somewhat lack of originality. Also, the conveyance of emotion is superb. While listening to this album, it’s easy to get overwhelmed by the bleakness, the solitude, the despair. I can feel the tortured souls on this recording and I like it! It makes me want to pack up all of my earthly belongings and set sail on an old Norse ship, or to live out of a vibrantly colored wagon in the foothills of the Ural Mountains. And, maybe more importantly, Forest Stream make me want to visit Russia and explore even further the musical treasures that are hidden from the masses of America. If you need me, I’ll be surfing the net . . . Googling Russian metal bands and seeing what comes up next. - Pope JTE

Dimaension X said…
I loved their first album, "Tears of Mortal Solitude". Hopefully this lives up to the hype and the length of time it took to create it.
December 12, 2009 at 4:59 AM