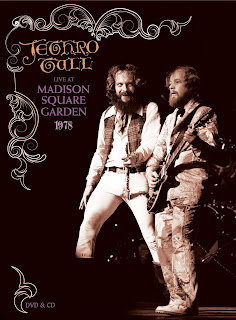 If Genesis was music for art school aristocrats, Yes for classical music purists and ELP for fans of pomp in all its bombastic glory, then Jethro Tull was prog rock for the everyman.

Maybe it's the band's genesis as a working blues band that makes them seem so approachable compared to those other bands, or simply the band's raving medieval persona. Either way, Jethro Tull isn't prog rock for the concert hall or the music chamber, this is rock and roll for the pubs of Sherwood Forest, full of busty bar-maidens overflowing from their dresses, ale being tossed about in slushing, spilling pints, fires roaring and popping in the stone hearths, and a band of lunatic minstrels entertaining the crowd.

Growing up, I could never get into Genesis, Yes, and definitely not ELP. To my ears, most of it was soulless noodling from a bunch of wankers. Sure, Genesis had their moments, but it wasn't rock, not like the Kiss or Aerosmith records I was listening to. But Jethro Tull was another story. Combining textural passages of classical, folk, and jazz into their heavy blues-laden attack, they managed to tread that dangerous ground of "high-brow" rock with out ever tilting over the edge into boredom. No doubt about it, Jethro Tull, despite all their "prog" influences, always knew how to rock. Toss in a maniacal flute wielding, leaping and hopping, frontman, and we have Racer-approved prog. 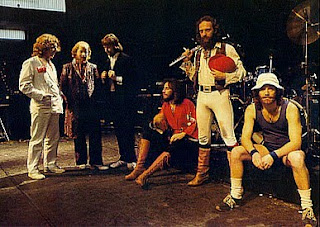 And everything I love about the band is here in overflowing goblet amounts. Filmed during the bands Heavy Horses, tour in 1978, Live at Madison Square Garden, captures a band at arguably the peak of their feudal power, with a taxman's saddlebag worth of gold bullion as a back catalog including such show stopping albums as Aqualung, Thick as a Brick, and Benefit. Now, this tour had been captured before on CD, with the Bursting Out album, but in my mind there's no comparison. While I always felt that Bursting Out was somehow lacking, everything about this new releases shimmers with vitality and energy, equally bringing out the prog elements of the band and their pounding rock and roll background. The performances throughout are spot-on, dynamic, impeccably technical, and soulfully rocking.

Songs I never really appreciated before burst out in vibrant living color. "Sweet Dream," from the long-overlooked Stand Up era of the band and "One Brown Mouse," from the recently released Heavy Horses, resonate with a new found grace and power on this disc. Martin Barre's guitar work is never short of perfect for each song he touches, while the rest of the band simply locks in and churns out mind-numbing performances. "Sweet Dream," in particular is stunning for it's surging muscle, while "One Brown Mouse," beautifully emphasizes the more folk/minstrel qualities of the band. Both beautifully done, and now both amongst my favorite Tull tracks of all time.

From there, the concert is one masterful tour through old standards, new ditties, and classic performances. Ian Anderson never once fails to be an engrossingly compelling frontman, with a voice meant to sing steamy bar stories and a flute he wields with the finesse of a wandering swordsman. Everything you love about Tull is here, including fantastic performances of "Aqualung," "Locomotive Breath," and "Cross Eyed Mary." Just the staggering 11 minute plus opus that is "Thick as A Brick," is worth the price of this disc alone. 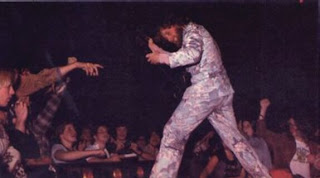 But perhaps the one thing that the CD can't capture is the frantic theatricality that Anderson brought to the music, hopping around like a one-legged bandit, flute always at the ready, ducking and weaving like a madman searching for dragons and maidens. That's where the DVD picks up the picture. Originally simulcast on the Old Grey Whistle Test, it's important to know that the DVD is incomplete in capturing the whole performance, editing originally done due to television time constraints. To this I can only say, "Who the hell cares!" This is vintage Tull, in all their lunatic glory. And believe me, Jethro Tull was a band meant to be seen as well as heard. Anderson leading the soddy band of wildmen like a man possessed. Hands flailing in the air, fingers flying across his flute, legs crouched and springing to his feet, Anderson is a perpetual motion machine. Toss in his wild and thinning hair, his scraggly beard, and mad, searching eyes, and it's easy to see why some people consider him one of the most intriguing frontmen in rock history.

And it isn't just Anderson. Barre and the rest of the band, clothed in suits befitting their medieval heritage, each adds to the ambiance. I've seen some reviewers complain of the truncated performance as a drawback. Simply put, they're critics searching for faults. So we don't have every song on video, what we do have is vintage, compelling Tull. The camera angles and editing are perfect, adding to the dynamism of the band, truly capturing them in the moment. And the 5.1 sound is fantastic. So much so that you can hear every inhalation and exhalation Anderson takes during his flute solos.

All in all, a breathless package, one that any Tull fan won't want to be without.

Now, just to make things sweeter for you waveriders. The Ripple Effect is working with EMI /Capital to give away two copies of this Tull fest! That's right, give away, as in free. Simply leave a comment below or email me at the Ripple address and two lucky winner, chosen at random will get their own copy of the CD/DVD racing to their mailbox.

Hurry, winners will be chosen soon!

bob_vinyl said…
I don't mind Bursting Out as much as you do, but I wonder if some of that is timing. When Bursting Out came out, the whole prog thing was kinda spent and rock and roll was retooling as a simpler, leaner model. But I didn't hear it until maybe 10 or 15 years ago, so that backlash was gone. I dunno.

That being said though, I completely agree that this set is much better, especially in light of the video. Anderson was just bananas on stage!
November 2, 2009 at 7:49 AM

Larry Feign said…
I was one of those snobs back then who preferred Yes (but not Genesis, that was too far into pseudo-intellect territory) and lukewarm about Tull, until a friend dragged me to see them live. Then I was hooked for a long time. Seeing these video excerpts on your blog has revived some of that old enthusiasm. Nowadays it's hard to find the kind of music that has great melody, rocks hard, and is intellectually appealing at the same time. Too bad Anderson is losing his voice these days.
November 3, 2009 at 4:50 AM

Psalmysteria said…
Right On! Not only am I an official CIRITH UNGOL t-shirt wearing fool, I'm also a big TULL fan. You and I must see eye-to-eye in many ways, lol...

I think my favorite TULL album is Songs From the Wood, and "Hunting Girl" my fave tune. But there be so many goodly tyunes, mayhap I be hard spent to make yon decision on which o' the best be better than the rest... See, even me language is changin'!
November 3, 2009 at 10:49 PM

The Ripple Effect said…
Thanks for the comments, guys. Love hearing from you. Why don't you all hitch up to psalmysteria's brigade of horses and trot over to the Ripple Pub for an ale!

Peter Goode said…
Is ther any other Prog band?