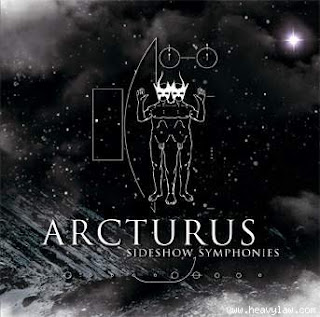 Deep in the swirling space dust and astral residue of some galaxy a billion light years away, a group of cosmic adventurers drift to undiscovered lands in search of some undisclosed treasure. Armed with their grit and their wit, the interstellar warriors of Arcturus face the constant danger of their vessel breaking down between space ports or being overrun by their own boredom in a world of weightlessness. Sideshow Symphonies is both a cosmic odyssey and a comic oddity, an album so complex in its scope that it leaves all listeners shaking their head with a pleasure smile, sometimes silently wondering how such sound can be created, but most times speaking these thoughts aloud. It’s an album that’s one part metal, one part classical, a whole lotta’ parts theatrical, and something that can best be described as avant garde. But, it’s avant garde with a consistent theme, if you will. These aren’t a bunch of songs that noodle for the sake of noodling, or shifting textures just to be weird. The songs that make up Sideshow Symphonies tell us a tale, of what I’m not completely sure, but suffice it say that it’s a captivating tale that will have you listening past the dynamic flurries of sound and anticipating the next mood swing like a child does Christmas morning.
Now, I don’t know too much of the back story about Arcturus other than, at one point in their career, they were once a black metal band of the most extreme order. But, like any good musician, they systematically pulled themselves away from being pigeonholed into any specific genre, as Sideshow Symphonies so adeptly shows, and created their own identifiable and unique sound. “Hibernation Sickness Complete” kicks this journey off into high gear as we witness the crew of this craft emerge from their hibernation cubes, tripping out and getting acclimated to their new surroundings . . . and the music captures the confusion of emotions. The guitars create layer after distorted layer of ominous bewilderment while the keyboards form passages that are ethereal, capturing the images of stars flickering through the ships portholes. Then the vocals with their paranoid and psychotic blend flesh out the crews emotions as they try to process their whereabouts, walking in a daze, stumbling over each other to take their appointed positions. Imagine waking up from a deep sleep to find yourself on the deck of a space craft, hurling at light speed, watching trails of stars zip past the windows, steam from the engine hissing from valves and all thought drowned out by the hammering of the engines pistons . . . the rapid fire beat of a double bass drum. 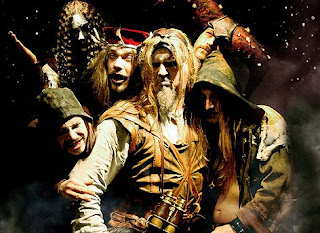 The cacophony of the music could become overwhelming and Arcturus does a fantastic job of interweaving strong melodies within the chaotic flurries of sound, specifically in “Shipwrecked Frontier Pioneer.” Some three minutes into the song, note the great transition as the band drops out of the mix, leaving just the drums. Within a few seconds, the chorus laden guitars slowly begin working their way back in, followed shortly thereafter by the sinister and creeping vocals. And, the song continues to build from there, incorporating lush and operatic female vocals that send this song to super nova. Amazing composition as the whole song flows through a complex array of tense mood swings and textural movements. It would be easy for this song to get lost up its ass, but the band did a great job creating an epic tune without it becoming longwinded.
Arcturus have mastered the art of combining heavy elements of metal with ambient keyboard flourishes, creating art while still kicking ass. “Deamonpainter” is another fine example as the song starts off with a compelling piano and drum intro, crisp in production and sharp in sound. But it’s the guitar textures that really grab the attention best. Interspersed within the piano and drums are these great bursts of delayed guitar crunches layered over more guitars sweeping along with an infectious melody. Suddenly, the frenzy vanishes, like a space ship coming out of hyper drive and all the stars become still, and we’re dropped into a beautifully melodic verse full of rich vocal textures. Pay close attention to the keyboard interlude as the synths scream. 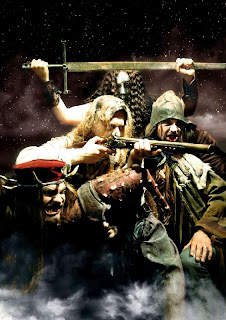 “Evacuation Code Deciphered” in a word is amazing. The manic vocal performance, the tension building tones of the guitars, the brooding synths . . . all of the instruments working note in note to create a splendid sound experience. From the very beginning of the song, one can feel the menace building and ultimately exploding as we’re jettisoned into the soundless depths of space. Everything works to perfect through the tune, especially the vocal work of . . . who is the vocalist? The Space Navigator, I think . . . no, wait! It’s the Alien Translator; Simen Hestnaes is the cat’s name. Anyway, the dude does an amazing job of working his voice around the musical structure, and then the female vocals of Silje Wergeland reappear and send chills up the spine. It’s a haunting and daunting performance, filled with swelling emotion and walls of tension. Oh right . . . you also gotta’ love the drum fill as Turret Gunner, Von Blomberg, rolls across the toms at supersonic speeds, leading the band back into the body of the music. You’ll know it when you hear it. “Evacuation Code Deciphered” is truly an epic!
As I mentioned, Arcturus could have made Sideshow Symphonies so avant garde that it would have been unlistenable, but they did a masterful job of balancing the beautifully melodic prog aspects and the metallic muscle with loads of Broadway Theater. This album has camped out in my collection for a number of years, getting spun from time to time, and always leaving me in a state of befuddlement. The album is over the top, but not so much so that it can’t be listened to in the context of one’s average day. Sure, you can sit back with a pair of high tech headphones and listen to every nuance to the music . . . much like I do, but Sideshow Symphonies works well as background music as you toil through the more mundane aspects of life. Though, I highly recommend the former option and embrace the act of listening to music, appreciating the art form for what it can do to the emotions and the stimulus that it can create in the brain. Oh . . . and if you can track it down, another strong recommendation is for the vinyl edition as it comes in a double gatefold sleeve with white marble discs. How cool is that?!?!? - Pope JTE
Buy here: Sideshow Symphonies

One of the most talented and interesting Norwegian bands that Hellhammer has been involved with. Great musicians with a fantastic sense of dynamics and showmanship.

Waverider X! So glad to see you, man! Yeah, I agree that their sense of dynamics are otherworldly, and judging by the videos I stumbled on, the stage show is an event to behold. It seems that they really got into the personas for this album. It comes across so much more sinister than comical.

Dream Theater fans should be all over this.