Kilego Vert - Journey to the Deepest Part of the Ocean 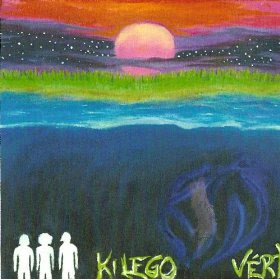 Any of you who grew up in the 60’s and 70’s knew the name Jacques Cousteau. He became synonymous with life in the water. Heck . . . I remember standing in ankle deep water in my old inflatable wading pool with flippers, a diving mask, and a pair of tidy whities as I tried to emulate my oceanic hero. The visual can be quite cute of a six year old acting out such fantasies, but in my case . . . it was last weekend and my neighbors were far from amused. Again, I digress, for what does any of this really have to do with this surprisingly artful release from Kilego Vert? Well, other than the title and theme of the album, absolutely nothing. Truth be told, I don’t believe Jacques Cousteau is even mentioned on this album, but it’s hard not to image the guy splashing around with the water life to this blissful soundtrack.

Journey to the Deepest Part of the Ocean is a majestic piece of music that borders on the surreal. The music captures the preparations of a deep sea dive. The anticipation of the boat crew scurrying about the deck, checking the oxygen mixtures in the tanks of the sub are correct, making sure the hoses are puncture free, going over the charts as their boat sways over the gently lulling ocean waves. The story carries on as our divers immerse themselves in the underwater delights, reeling in the fantastic voyage of discovery as unknown species of fish carry on their daily routine. The musical styling can best be described as a conglomeration of The Police and Pink Floyd with a touch of dissonant guitar to bulk up the sound and brought to life with a vocal performance from a subdued Peter Garrett of Midnight Oil fame. Journey to the Deepest Part of the Ocean is a little proggy, a little psychedelic, a little jazzy, and who lotta’ raucous as the band takes on one hell of a trip.

Broken into three ambitious sections, the album starts with “The Dive,” which highlights those subdued Garrett-esque vocals. The clean guitar tones enhance the visual of the sun shimmering on an early morning Pacific Ocean and capture the mood of peace as out travelers head towards the dive point. Eventually, the tempo increases, the instruments all get a bit louder as the excitement for the dive mounts, and our heroes are submerged in the depths of the unknown. The jazzier aspects of the band shine bright on “The Dive” with a touch a huge rock n’ roll guitar sound. The wah drench guitar solo is one to take in with all senses and the subsequent musical break at the 6:15 mark is awesome with its stunning time changes and tight execution. The song seems to grasp for the peaceful solitude of life without the interference of human existence, exploring the human condition within the discovery of a vast world untouched by the defiled hands of mankind. The tune goes into full on Police jazz mode as the song starts to wind down and Andy Summers would probably crack a small grin of appreciation at that run.
“Sum Kind of Exploration” opens with a tripped out, psychedelic wave of sound that brings to mind a great visual of the lights from the descending sub reflecting on the various underwater particles and life forms, beyond the reach of the beam of light . . . nothing but imposing darkness. Searching to find something that will make sense of all life, our three heroes continue their descent to the deepest part of the ocean, taking in more and more of the wondrous life forms that most men will never lay eyes on. At this moment, the guitar solo kicks in and suddenly, it’s as if David Gilmour was the captain, cruise director, and purser all wrapped into one. Guitarist KilegoTy whips out a phenomenally emotional solo much the way that Gilmour is famous for. So rich and full of texture, that solo should be grabbing the attention of the folks at Guitar World! But wait . . . there’s more! Keep listening and you’ll hear another solo steeped in wah delight that will simply take your breath away.

“Resurfacing” is the final track to the story and basically tells the tale of Keligo Vert returning from their voyage to the bottom of the ocean, hopefully finding what they were longing to find. As the tune starts off, it meanders a bit . . . restrained and slowly building to some massive musical movement. With the piano keys chiming, the cymbals shimmering, vocals crooning, much like the air bubbles floating back to the surface, we can feel an uplifting sensation as the lads work their way to the next groove. Then the guitars kick in with a classic Pink Floyd delayed guitar groove that takes its time to build into this raucous passage of echoing guitars, heavy bass groove, and pummeling drums. The layered guitars work well on this track, harmonizing on the run of scales and adding further weight to main riff. And, of course, we’re treated to another searing guitar solo that acts as the exclamation point to this band and its creativity, original in approach and tone, yet taking just enough from the past that there’s an air of familiarity to the whole thing.
Kilego Vert did an excellent job of creating a concept album that takes the listener on a journey. Yes, there’s the whole Journey to the Deepest Part of the Ocean thing, but there’s also the journey to the deepest part of the mind. Musically, these guys stand on their own. All three members of the band are not only adept at working with each other to create fascinating music they also inject their own personalities to the vibrant palate and allow this record to soar. What I appreciated the most though is the way they structured the album on a musical level. It’s a concept album with very few vocals to it in comparison to the musical passages, yet they were able to tell a story nonetheless. The story flowed with the serene intro to the days dive, the hectic anticipation and preparations to the dive, the dive itself, the introspection along the way of the journey, and the conflict with returning from a blissful paradise to a world that tends to be uglier than anyone would like. All of the emotion was captured. Welcome back to the surface, lads . . . looking forward to your next excursion! - Pope JTE