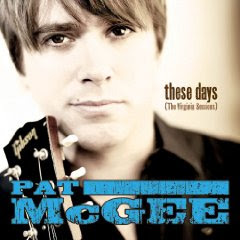 Dispensing with fairly useless descriptions like “nu-country” Pat McGee’s newest album combines bits of rock and country but borrows whatever sounds it wants. The organ that fills out the chorus of “All Over You” works hand in hand with the percussion that we catch glimpses of in the break and behind the lyrics. The melody may sound like classic country but the interplay of the organ and guitar interspersed throughout the song takes it to new places if you’re listening closely.

With an insistent driving rhythm, Pat’s vocals jump into the back seat of a car doing 80 down the highway on a song that sounds as dangerous as the relationship that “Hand That Holds You” describes. The slight clipped edge to the rhythm guitar, the racing percussion, the horn section that appears from nowhere: this is one of the highlights of the album. Its taken you so long/when you should be so gone/there’s gotta be something somewhere to pick you up somehow. The breakdown at the end of the song has the organ careening over the band into a jam section that should explode on the concert stage. Picking back up the sax, guitar and horns along the way, the percussionist stays deep in the pocket, driving the whole thing. 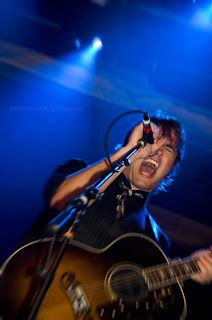 When John Cusack’s Nick opened up High Fidelity with the hypothetical question to the audience: “Why don’t we worry about the millions of heartbreaks that we’re exposed to through pop music growing up?” With a soaring chorus, “I Don’t Think I’m Listening” takes up to the heart of the conflict: waking up alone and lost. I try to tell myself /I’m not myself at all these days/but I don’t think I’m listening. The band is in fine form, the arpeggiated bits on the break, the piano both augmenting and filling out the bits behind the lyrics, the subtle slide guitar and delicate picking up playing up the main vocal melody: a masterful orchestration of instruments for a great little pop gem that could have arisen out of Nashville as easily as Los Angeles.

Against the stark piano and drum loop, “Come Back Home” takes another lost soul into the modern world: the production only allows the sound the fill out the world around when we get to the chorus. For the first part of the song we’re as isolated from the vocals as he is from his home. After the first chorus, the world is filled with reflective production touches that match the lyrics: the echo of the vocals over the lines haunted by everything you said, the chorus of Pats singing here come those tears again, the ghost of voices during satellite/a million miles above my bed. McGee sells yet again on the loss without sounding trite or corny, a feat in itself. The real world would intrude on the pop one twice with this song, first with the long time drummer for the band passing away suddenly, as well as losing the younger brother in Iraq. "Come Back Home" would be used in a video to honor returning soldiers from the US involvement in Iraq.

“End of October”, “You Want It All” are fine efforts as well in an album with more than a few standouts. Pat is perpetually on tour and his live efforts are outstanding from the recordings. Keep your eyes on this tour list and try to get your butt out there when he comes round. And in the meantime, pick up These Days, a great recording that you’ll be spinning again and again.