Oh ho, I do love it when I walk through the doors of the Ripple office and see a smoldering package resting on my desk! Actually, I can usually tell about a block away that a new package from Pulverised Records is waiting for me. There’s that special smell in the air . . . kinda’ this odd mixture of sulfur and burning furniture wax, and it has a physical affect on me as well. My pace increases a tad, I may or may not get a little skip in my step, and I’m certain that I even begin salivating. On these special days, I generally enter the office to see intern Monica standing with fire extinguisher at the ready, hoping to merely contain the menace growing on my desk until I can arrive with my tongs forged from the very fires of Hades. Monica generally has a look of fear on his/her face as I shake the burning embers into the sink, and quietly disappears from my presence. Heck, it wouldn’t matter if he/she were still there, I probably wouldn’t notice. I have a new package from Pulverised Records! Is there really anything more?

So, let’s get dissecting, shall we? 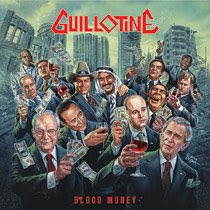 I’d heard a few things, mostly ambiguous, about this album through sources within the metal underground, and I’m here to stand on my Pope box and put my full support behind Blood Money. My god, man . . . this is the most exciting album I’ve heard in quite some time! You old school metallers will remember the late ‘80’s when we were hearing the fresh sounds of thrash that Metallica had helped spawn. We had those speedy passages that would suddenly drop in the middle of the tune and leave nothing but a bitchin’ mid tempo groove, inciting a violent circle of full body contact by a thousand mosh happy hessians. Bands like Exodus, Anthrax, Kreator, Nuclear Assault . . . they all had us flexing our metal muscles no matter how scrawny we were. Twenty years later, we have Guillotine, and if you long for the days when metal made you want to get out of your comfy chair and thrash, then Blood Money is the album that you need to go out and get.
“Insane Oppression” opens the album with a blistering speed fest of the most massive portions. Very up tempo and urgent, the band only adds stops to add an element of tension to otherwise speed freak of a tune. The vocals sound hauntingly like those of Mille from Kreator, and there is a definite “German thrash” vibe to the tune, particularly as they band breaks at the mosh part. And, like good thrash, the guitar work through the solo is technically sound and, dare I say, thrilling. Not a million notes of nonsense as we’ve heard from recent metal outings, but a well thought out and emotionally laden solo.
As quickly as “Insane oppression” ends, “Rebellion” picks up and beats us into submission. Ultra-fast drumming and forearm straining guitar work act as the foundation for this tune, only broken up by another mid tempo riff and stratospheric guitar solo. It was at this point that I was thinking that I would be listening to twelve tracks of one similar song after another, and thank god I was wrong. Remember that scene from Ratatouille when the food critic is served the dish of ratatouille, and is propelled back to the innocence of youth through his subconscious mind? Yeah . . . that was how I felt when I heard “Insanity.” The epic build up of music with the sampled news feeds in the background, then the way the main riff is fired through the left speaker, followed by the second guitar jumping in from the right speaker, ultimately culminating into a body flailing, head bobbing thrash epic as the rest of the instruments bludgeon the senses. Fuck yes! This is the metal that I’ve been looking for since . . . And Justice For All. Waveriders, forget Trivium or Mastadon as being the new heirs of metaldom. That honor should rest solely on the shoulders of this little ole band grinding it out in Sweden. The whole album is filled with these massive metal moments of thrash happy aggressiveness and socio-political lyrical themes. 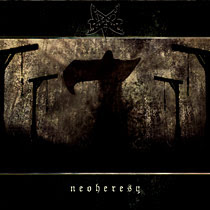 For you Waveriders who like your metal blackened, atmospheric, folky, and pagan, then Hellveto is definitely an underappreciated entity in the metal underground and one that you need to pay close attention to. Neoheresy is simply brimming with earthy characteristics that assail the senses where you can almost smell the mud and the minerals in the dirt. You can feel the chill of the winter air on your flesh. You can feel the desperation of the peasant folk working the fields under overcast skies. Quite possibly, you’ll see shadows moving through the fog enshrouded forests of Eastern Europe. Creepy. It’s dark and moody music that sounds more fitting for the birth scenes of the Uruk-hai from the Lord of the Rings series than any orchestral score Howard Shore composed for the films. Take away his Oscars and hand them over to Hellveto.
Hellveto incorporate a wide array of instruments to convey the moods throughout this album. “Milczace Sumienie” features a good amount of acoustic guitar mixed with, what is that . . . a harpsichord? . . . to create this incredibly haunting atmosphere before bursting back into the traditionally distorted guitar attack that is prevalent in black metal. I love the way these guys mix it up and add so many different elements of musicality to create these sprawling epics. No . . . I can’t understand a word that they’re saying, and honestly, I don’t care about that. The vocals work well within the confines of the music and add their own element of intrigue. I can accept them for what they are.
“Sredniowieczna Egzekucja” is a fierce and feisty piece of music. Laden with black metal blast beats, hyped up guitar work, and vocals that sound like their coming from the tortured souls deep in the heart of Mordor, it’s actually the galloping guitar riff back by the ambient synths that give this tune it’s massively epic feel. The tune sprawls across almost seven minutes of blackened landscape and acts as the catalyst to get the imagination fired up. There’s nothing romantic about this, this is music that acts as the soundtrack to the desperation within the slave pits . . . slaves stepping over the fallen bodies of fellow slaves. Foreboding and lacking of hope, Neoheresy is just the album that I need to incite a riot within my rational mind. 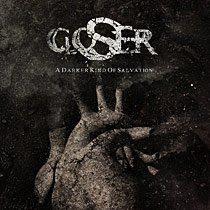 Closer – A Darker Kind of Salvation

Two out of three metal bands comes from Sweden. I don’t know if that’s an actual scientific fact, but it sure seems that way anytime I get a promotional package that has metal innards. Closer are metal and are from Sweden, and what we have from these lads is metal in the vein of Arch Enemy or Soilwork. Gritty and heavy riffage, mid tempo drumming, vocals that could peel the stucco from the side of my house . . . you know, metal! What I found most intriguing about these guys was the guitar work. The solo’s are little shred-fests that will make you wonder what happened to the guys we used to consider gods. Stand out tracks are the opener “Chaos Internal” and the melody infused “What Am I?” In particular, check the solo from “What Am I?” It’s just got class written all over it. I’ll be very curious to see what the future holds for these guys. Good things, I’m sure. - Pope JTE