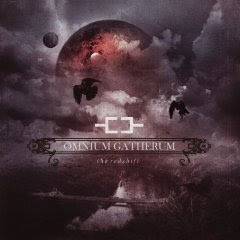 As Racer and I have mentioned in numerous posts and podcasts, there has been an incredible output of music from Sweden and, to a bit of a lesser degree, Norway. Up to now, very little has been said about their Scandinavian neighbor, Finland. Not that there isn’t a massive music scene going there, it’s just that we haven’t been able to get away from the magnetic pull of these two countries to inspect it further. Attention all Finlandians, send us your huddled masses! We need to hear more of your music!
What has inspired this call to the masses is a band called Omnium Gatherum. During my first spin of their latest album, The Red Shift, I thought to myself, ‘Self . . . this is one of those Gothenburg bands from Sweden doing what those Gothenburg bands do.’ Ah contraire, Omnium Gatherum do have those moments, but I found on deeper inspection that the melodies were so much more endearing than those of the Gothenburg crowd. These are the types of melodies that stick with you like tree sap at Christmas. Though I’m not going to go as far as to say this is a completely unique album or a different take on the genre, I am willing to say that The Red Shift is an album that has pulled on my heart strings in ways that In Flames and Dark Tranquility never have.
As I mentioned, the album starts off sounding very similar to the Gothenburg brand of death metal. Heavily aggressive riffage and drum work, cookie monster vocals, a smattering of keyboard mixed amidst the chaos, it all sounds very familiar. But wait a second . . . there it is . . . a nifty little time change to fuck with the rhythm. Excellent touch! Oh . . . and there’s the melody. Oh yeah. Great guitar solo and a massive break down that gets the body swaying back and forth. “Nail” is actually a pretty bitchin’ tune and an ideal album opener. Clocking in at just under four minutes, this tune has pretty much everything going on in it, and y’all should know by now how I love my metal to be dynamic. “A Shadowkey” and “Chameleon Skin” follow much of the same formula as the opener, and I get the sense that these three songs act as a kind of warm up for the rest of the album. All good tunes featuring some fantastic musicianship, but they seem to lack that je ne sais quoi.

That little something special is found on “No Breaking Point.” Damn it . . . what a tune! Opening with a fuzzed out guitar tone more commonly found in your garage rock oriented bands, the tune slaps the listener across the face with that melody covered in Stickum. The tune immediately blasts away with the typical riff happy heaviness that’s prevalent in this form of music, and lay everything to rest with the chorus. There’s that melody highlighted by, of all things, a piano hauntingly plinking the melody line. Freaking beautiful! This will be on the radio show soon, folks! None of the brilliance of this tune would be possible without the performance of the vocalist, Jukka Pelkonen, who belts out the poetic lyrics with so much damn passion it’s hard not be moved. All in all, the entire band gives us a glimpse of what they’re made of in this tune, and even more exciting, what is possible for the future.
“The Return” is a great follow up to “No Breaking Point” in that it’s a thrash happy riff monger of a tune. Heavy as any metal played through a Marshall stack, Omnium Gatherum work the music with room to breathe. Shifting from brutally heavy to hopefully melodic, this band seem to have it all figured out. The uplifting melody lines played by the guitarists create this incredible counterpoint to the heavy rhythms throughout the tune, almost inspiring the listener to greater accomplishments in spite of the overwhelming chaos of reality. Within the confines of this outstanding tune, you’ll want to tune your ears to the bass work going on. Nice work in keeping the groove, yet adding some unique flavor to the tune!
Omnium Gatherum shift gears a bit with “Greeneyes,” giving us a greater understanding of the layers of personality within this band. The tune is greatly slowed down in comparison to the rest of the album, haunting in its melody, and all perfectly conveyed through the tortured vocal performance from Pelkonen. The band did an amazing job of mixing the incredibly dense music with the somber melody, creating the doomiest and gloomiest piece of music on the album. This tune just sends chills up and down my spine . . . it’s damn near creepy, but the beauty overwhelms me. Kinda’ like walking down that fog enshrouded forest road, creeped out because of the unknown lurking beyond our vision, but enraptured by the natural splendor of the shadows and wisps of moisture floating across the ground. Yeah . . . that’s “Greeneyes.” Scary beyond all belief and captivatingly beautiful.

“Shapes and Shades” is another killer . . . up tempo, heavy riffing, steady rhythm with the hopeful melodic strain meandering through the darkness, “The Redshifter” with its bludgeoning intro to its musical interplay verging on prog (another tune to listen for the bass work,) “The Second Flame” shifting from palm muted riffage to sustained blasts of distortion and head bobbing rhythm, “Song For December” with its acoustic guitar passages and inspiring melody, acting as an instrumental intro to the album closer and quasi-epic, “Distant Light Highway.”
Simply put, The Red Shift grew on me. Sure, I liked the beginning of the album, but it wasn’t until I got through the last track that I recognized that this album is a brilliant piece of metal art. The metal genre should feel blessed that there are bands like Omnium Gatherum plugging away out there. Without them, the genre would simply be one Disturbed after another, and we can’t have that now, can we? The emotion packed into The Red Shift is in your face and the band has done a marvelous job of expressing the pain, the hope, the struggle, and the inspiration that life truly is. Produced by the great master knob twirler and death metal pioneer, Dan Swano, The Red Shift reflects the world that we all know, yet sometimes fear facing. Not the socio-political fears, but the everyday fears of facing a day brimming with love, lost dreams, and failure. Emotional fears that scar each and every one of us to some degree. Great job, guys . . . look for me perusing your back catalog (this is apparently their fourth album,) you’ve converted another one! - Pope JTE