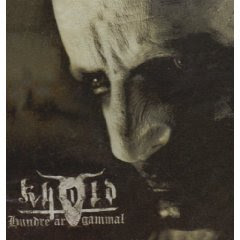 Leafless trees stretch across this Norwegian mountain landscape, their trunks buried in snow, dormant and apparently lifeless until the spring’s first thaw. But that’s a long time from now. Now, the land is an imposing frozen wasteland where only the hardiest of creatures would dare to step foot from their warren. One of these warrens is a cabin overlooking a frozen lake with a lone fishing hut stuck in the center of it. This cabin is the last sanctuary to the elements. Animal pelts can be seen hanging from the eaves and are being blown at extreme angles by the bitter and biting northern winds. Four faces stare at the foreboding landscape through the cabin’s darkened windows. Four menacing faces that warn all trespassers that this is sacred ground and only the darkest of the darkest metal bands are allowed to leave their footprints in this hallowed snow.
While Enslaved may be the band stuck in the ice fishing hut in the middle of a frozen lake, Khold are the guys tucked in the darkened cabin, overseeing the natural domain of forever winter. Hundre ar Gammal is the soundtrack for these guardians. Though black metal in name, the album steers away from the blastbeat attack that has somewhat defined the genre. Hundre ar Gammal is a mid tempo, groove oriented opus that packs more menace than any kid named Dennis ever did. Gritty and textured guitar work and thundering bass lines propel the album, making it a head bobbing epic. The vocals, all sung in Norwegian, add an air of pain, despair, and realism that only a foreign tongue can produce. Beautiful in its ugliness, Hundre ar Gammal borrows from the dissonant brilliance of albums before it and Khold add their own unique spin to create a wondrous experience.
Opening track, “Der Kulden Rar” hits us right between the eyes with a mid paced piece that reminds me, at times, of Celtic Frost. Sparse guitar work through the verses give the song the air it needs to breathe, yet it’s these same sparse guitar passages played with an ornate quality that makes the song feel fresh. It sounds like there may even be a little ambient keyboard flourish hunkering around the background, which broadens the sound a bit. The vocals are incredible! Though sung in Norwegian, which is a language I know absolutely nothing about, it sounds familiar. Earthy and aggressive, the vocal lines portray the level of black metal dissatisfaction that I’ve come to expect.

“Hundre Ar Gammel” is freaking epic! From the opening groove and vocal belch, through the solo distorted bass line, and into the sludge groove of the first verse, this song is worthy of any heavy metal Hall of Fame. Keep an ear out for the little string bends that the guitarist whips out through the groove. Simple, but well crafted, “Hundre Ar Gammel” was the tune that made me realize that I could get behind this album full force. I love the chorus on this one as well, specifically the guitar work as it goes from the deep metallic grumbling and then shifts to the higher registers, providing a bit of light and shimmer to an otherwise dark and blackened piece of music. Most impressive!
Khold pick up the tempo a bit with “”Trolos”, and suddenly entertain us with a new wrinkle to the fabric of their being. Great dynamics as the instruments cut in and out of the mix! This tune has an almost straight up rock feel, but it’s the dynamics and darkness that will never make it truly accessible. Again, the guitar work is unique and compelling. Rather than simply bludgeoning the listener to death with a detuned riff, he’s incorporating cleaner tones and creating this perfectly addictive ambient feel. Khold may be categorized as black metal, but like the way Enslaved has stepped out of the black metal box and experimented with different sounds, Khold has done the same. Rather than go full fledged into the realm of experimentation, Khold has tweaked the tempos to be anything but typical.
“Forrykt” and “Rekviem” buck more of that tradition, dipping their toes in the pond of accessibility just enough to get a taste for the groove before going back into their snow covered cabin. “Rekviem,” in particular, is a haunting tune with its high pitched guitar melodies, lending a downright creepy and chilling aspect to the music. But it’s “Sann Ditt Svik” that gets me the deepest! With its swirling bass lines wisping about in the background and the guitars doing what they’ve done all album long (impress me to no end,) the tune has carved out a niche in my psyche and taken up residence. And the chorus . . . damn, I love it! I have no idea what they’re saying, but it sounds like dude’s yelling, “Snarch!” I have now adopted that as my war cry or curse when I stub my toe. 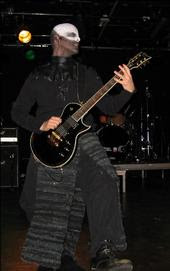 As I mentioned with the Enslaved review a few months back, this isn’t going to be for everybody. Folks who like their metal leaning on the extreme side should be able to accept Hundre ar Gammal, and I’d go as far as saying that those who just like their metal heavier than the norm will love it. People, get past the language barrier and remember that this is all about the music, the universal language. Though sung in a foreign language, the vocals work well with the music. The vocals have that rough texture to them, but don’t come across as forced and they meld within the context of the instruments fluttering around it. But beware, it’s a dark and foreboding listen! Sure, you’ll inevitably find yourself bobbing your head and movin’ to the groove thang, it’s just that it’s a darkened groove and you’ll begin to wonder if you’re actually dancing with the devil. To that I say, “Snarch!” Remember to travel the hills of Norway with a copy of Hundre ar Gammal, coz if you need to get out of the weather and that aforementioned cabin is in front of you, you’re gonna’ want to have proof that you belong there.
-- Pope JTE