The Tubes - The Completion Backwards Prinicple 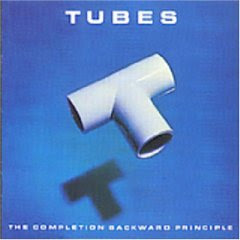 When I first heard that Fee Waybill, the charismatic, definitively wacky lead singer of the Tubes was going to be a guest on our very own Ripple Radio Show, I was giddier than a troop of girl scouts in a cotton candy factory. I mean this was Fee Waybill. The Fee Waybill. . . Johnny Bugger. . . Dr. Strangekiss. . . Quay Lewd. . . here on our very own show (you can hear it live October 29th 8-10 pm Pacific Ripple time, available for free download after than just by hitting that cute little blogtalkradio button you see over there to the right).

You see I'd grown up a long time fan of the Tubes. Yes, waveriders, I was a White Punk On Dope living in Mondo Bondage just trying to figure out What Do I Want From Life. In fact I can say unquestioningly, that the Tubes breakthrough album, The Completion Backward Principle, along with Eddie and the Tide's Do it For You, were the defining albums of that glorious summer of 1982, the year between freshman and sophomore years in college. No matter where we went that summer, draggin' down to the beach in Santa Cruz, jolting up to river raft in Sacramento or just drunk off our keisters in by our own backyard swimming pools, the rallying cry of "I'm not going to fry your burgers," was always right there with us.

And what an album it was. Fresh and weird and quirky and rock, full on rock that even my friends who refused to admit that they liked new wave could still get into. Now, with the Tubes radio show coming up, I decided to take advantage and break the Completion Backward Prinicple back out and give it another spin in the Ripple CD player, and you know what, it still sounds just as good today.

Having started out as arch satirists of popular culture with an outrageous stage show that bordered on soft-core pornography, by 1981, theTubes were a band in crisis. Despite having launched a few now-classic cult singles (the above mentioned "White Punks on Dope," "Mondo Bondage," and "What Do You Want From Life?") the band weren't selling any albums. After the poor sales of their Todd Rundgren produced Remote Control, the band was dropped by their long-time label A&M. Now signed to Capital, the Tubes needed to make a splash. And boy did they. 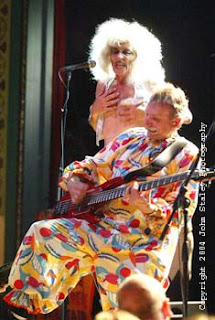 Bringing smooth rock producer David Foster and working with some studio musicians like Steve Lukather may seem like desperate act by a band just begging to sell-out, but actually, it was an act of genius. Foster added a polished sheen to The Tubes consistently whacked out rock, funneling the sound more fully in the burgeoning new wave sound, producing a mini-classic of rock satire, new wave kicks, soulful grooves, wrapped up in a mock-corporate sensibility all packed with enough insanity and muscle to pull the whole thing off.

Certainly, "Talk to Ya Later," is one of the classic tracks of 1981. Kicking off with an instantly recognizable stuttering guitar riff slashing through the driving bass, Fee jumps in with his tale of the girl he found at a club who came home with him for a night of fun and never left, leading us to the classic line "It's been six months/she hasn't shut up once." This has to be one of the ultimate break-up songs, full of spit and venom as he screams, "Get out/I'm telling you now." On a personal note, I once had a "girlfriend" like that (you know who I'm talking about Pope!) and when I finally reached my limit and screeched for her to "Get out!" I swear, Fee's voice was ringing in my brain, guiding me along. For that alone, Fee, I owe you more than I can ever repay!

While "Talk to Ya Later," was certainly the best cut to be released as a single, it's by no means the only good track on the album. The funky oriental-toned food/sex innuendo extravaganza of "Sushi Girl," and the odd-take on reconnecting with an old flame power ballad "Amnesia," lead flawlessly into unadulterated anger-filled tirade of "Mr. Hate." Starting off with a retro-swing, neo-193o's vibe, complete with finger snaps, the real intention of the song follows when Fee wails "You said my mom is dead, my sister too/You say I killed them but it's just not true." From there the tune never lets up, driven by a thumping bass and the twisted lyrics trapped inside the mind of a sociopathic killer. Few tunes capture the power of this rumbling hatefest, leading up to the frenzied break and shouted tirade "I'm not going to fry your burgers . . . You'll never take me alive." When the songs pounds back into the chorus, this is about as mean and nasty as the Tubes ever got.

What follows next then, is about as absurd, goofy and perfect as the Tubes ever got. "Attack of the 50 Foot Woman," is a B-rated sci-fi extravaganza played over a funk bass and synth fills. When they parked the car down at Three Mile Point and the reactor flares, you know you're in for a treat. A fifty foot woman in a five foot dress. Fee sings it as straight up as any song he's done, selling the absurdity of the premise all the way through the lounge jazz break, right back into the funky verse. And no description of this song could ever be complete without mention of one of the truest lines ever sung in rock and roll. "She left me there/though I tried and tired/a fifty foot woman's never satisfied." 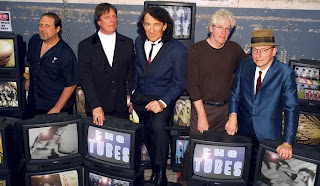 Got a feeling for the album yet? Satirical absurdity all perfectly played through a velvety smooth new wave gloss. Throughout, each band member's performance is outstanding, whether it's the ever present bass of Rick Anderson, the perfectly placed keyboard fll of Vince Welnick or Michael Cotten, the power of Bill Spooner and Roger Sterns guitar riffs, the incessant beating of Praire Prince on drums and then again, there's Fee, who's vocals are perfect, raging with emotion and raw energy when he digs into a rocker like "Power Tools," or shimmering with a gentle gloss on ballads like "Don't Want to Wait Anymore." And through it all, with their tongues planted firmly in their cheeks, the Tubes always manage to bring an unexpected Tubes-esque twist, like the swirling rush of synths on "Think About Me," or the scatter guitar and gang vocals on "A Matter of Pride."

In the end, The Completion Backwards Principle resurrected the Tubes career, entering the Top 40, introducing them to a whole new generation of fans and setting the stage for their biggest single "She's a Beauty." But more than that, the Principle finds a band firing on all cylinders, mixing their history of wild antics with a new found embrace of the then raging new wave movement. The result is an album of near-perfect, impeccable pop. And the perfect soundtrack for the summer of 1982, 2002 or 2012. It doesn't matter. Just bring on the summer and let the rest fall into place.

Talk to Ya Later

Wow. I couldn't agree more. A great album, a sell-out and a satire of selling out all in one package. Was irony hip back in the 80s? No, there was too much blow going around...

One thing I always loved about The Tubes was their completely absurd lyrics. I mean, these guys had some of the most (purposely?) inept couplets ever: "I could run off to Jamiaca/If this bondage I could break-a" From "Mondo Bondage," "Love is real, love is certain/When I hear the words I just start hurtin'" from "Mr. Hate," and of course "Other dudes are livin' in the ghetto/But born in Pacific Heights don't seem much betto" from "White Punks" to name my faves. Man, those always provoke a simultaneous laugh and guffaw. That's tough to do, and these guys did it consistently.

Too bad I won't be able to tune in to Fee's show, but I will download it for sure. He still has game: we saw The Tubes in 2006 and his voice was better than ever. Of course, he always sang kind of flat....

Thanks so much for this entry and the videos. I look forward to hearing the show and to reading about more great stuff here. Oh and Racer, it looks like we share a love for heavy stuff as well, I hope to read more from you.

Thanks for your great comment. Reading your samples of Tubes couplets I spit my milk out through my nose. So I guess now, I'll send you a bill for my sinus surgery!

I couldn't agree more with what you added. "A sell-out and a satire of selling out all in one album." Brilliant!

I was really disappointed that they never made it big.

Stay tuned, I promise we'll get that up on the Ripple soon!