East of the Wall – Farmer’s Almanac 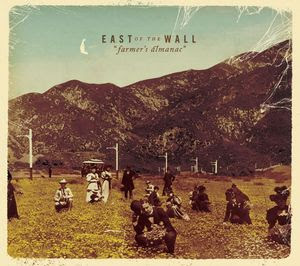 I’d like to open this review by stating that this is my new favorite album. I’ve listened to a lot of music in my short time on God’s green earth, and I can’t remember being this compelled by one singular album. I don’t know if it’s going to be my favorite album of all time. Hell, my favorites seem to change with the seasons, and I honestly don’t particularly care about that. I’m living in the moment, and in this moment Farmer’s Almanac is my favorite album. What’s so good about it, you ask? Freaking everything!

Most people get turned off by music because the vocals do something to ruin the feel of the tunes. Well . . . for those people, you won’t have to worry about that here. There are no vocals. Farmer’s Almanac is a purely instrumental outing, and for the first time that I can remember, I’m not looking for a singer. I’m completely content reveling in the splendor of the waves of music crashing against my ear drums. On the first spinning of this disc, I remember thinking, “Damn. We have something here.” By the fifth or sixth listen, I wanted to write my own lyrics and lay down my own vocals to this thing. Not because the music needs it . . . God no! I just wanted to be a part of the creative process! I want to contribute to the majesty of Farmer’s Almanac. Fear not, Waveriders . . . I won’t do anything to disrupt the vibe of the album. I’ll just sit here and write beautiful words that will inspire you, the reader, to click the link at the end of the review to further explore the sounds of East of the Wall. 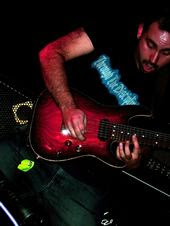 The album opens with “Meat Pendulum,” which has a mixture of acoustic guitars and heavily distorted bass, spending a good minute or so reminding me of Deliverance/Damnation era Opeth, before the tune explodes into off kilter dissonant guitar riffs and a monstrous double bass drum flurry. This tune is pretty straight forward in the way of hammering away at the senses to grab the listener’s undivided attention. I personally dig how the band changes up the rhythms without changing the riff . . . it kind of shows that progressive slant that keeps the hard edged music interesting, especially since there are no vocals to key into.

The tune ends abruptly and the next song, “Winter Breath,” kicks in, sounding almost as if the first song never really ended. But there’s no denying that these are two completely different songs as the guitars suddenly go with a clean tone, embracing the winter feel of the title. Note the bass work, specifically as Brett Bamberger uses some unorthodox techniques in the muting of the strings. This is what I’m talking about. Unique twists to the way music is normally performed. Always keeping the listener interested in the music. It’s almost as if the musicians are having a conversation through their instruments. Also, note the change of tone once again from the guitar tandem of Matt Lupo and Kevin Conway. The song goes from full on alt-rock to jazz. And that’s not it! The whole band gets into the action shortly after the jazz break with some tight ass start-stop work, and then goes off on another seemingly random tangent. So wonderfully fucking brilliant! 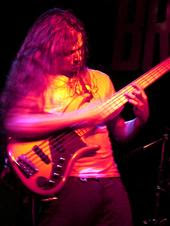 The Red Neck Wookie from Lakeside once told me that the only bass player who should have a bass with more than four strings is the dude from Dream Theater. Trust me folks, I’ll have him eating his words and running to cower behind Han Solo after he hears this. “Switchblade Knife” is a bass playing clinic. Hell! For that matter, it’s a guitar player’s clinic as well. So many different moods and tones flow through the context of the tune and it’s all embellished by the musical prowess of these fine lads. Now would be a good time to mention the work of drummer Mike Somers. The dude does an amazing job of keeping these three virtuosos together and making sure the tunes don’t fly apart on their own accord. He kind of acts as a tether grounding these guys and keeping them from flying into the sun. The end of this tune features some serious low end. I think I need to replace the speakers in the Popemobile again. This tune did a serious number to them!

Amazing guitar work is featured throughout Farmer’s Almanac, but check out “Clowning Achievement” at the 2:24 mark and get spellbound! After the initial mind blowing solo, the second guitar comes in, laden down with effects the like I’ve never heard and take me to another realm. Seriously . . . I can’t get enough of this! So many rich sounds swirling around my head. So much emotion and passion with every struck string. And, as if “Clowning Achievement” wasn’t enough, East of the Wall break down every barrier with “Unwanted Guest (I)” and throw in a little trumpet to compliment the jazzed out bass lines and guitar work.

Apparently, bassist Brett Bamberger and drummer Mike Somers were in a band together called Postman Syndrome prior to forming East of the Wall. Now . . . I don’t know squat about Postman Syndrome, but if they were anything like East of the Wall, I’m tracking down everything they’ve done and spinning it insane–like. I can’t recall ever being so moved by a piece of music like this before. Remember, I can get pretty jaded about music, so having something that intrigues me to this level of fascination is unprecedented. Farmer’s Almanac has already received some preferential treatment by taking up permanent residence in the Popemobile, for whatever good it does me. I still have to get those speakers replaced to truly enjoy the splendor of this album to its fullest potential. Folks, it ain’t hype if it’s true. Check these cats out . . . you won’t be sorry! -- Pope JTE

This is actually a clip from Biclops (band prior to East of the Wall) and should give you the general feel of what these cat's are up to.

Anonymous said…
Good review. I dug their EP and can't wait to hear this.

Just to clear up a couple things, Biclops isn't their former band, Conway and Bamberger are still playing with them. Everyone except Conway was in The Postman Syndrome, who were awesome. They had one full album called Terraforming, and a bunch of later stuff that was never officially released, but was even awesomer. When Matt Lupo and Mike Somers left the Postman Syndrome, they became Day Without Dawn (who were amazing, check them out too) and then Biclops, who are the current project.
October 22, 2008 at 1:19 PM

The Ripple Effect said…
Fathead - Thank you for the clarifications on the members past and present endeavors. I'm very curious to track down more of their work, under whichever name they go by. Interesting to know that Biclops is still going strong . . . I'll be in the hunt for that as well.