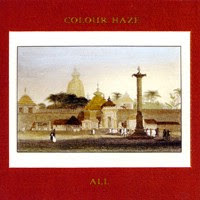 There’s a new psychedelic vibe bubbling up from the underground and here at The Ripple we’re tuned in and turned on. My first taste of this new sound came when the latest Dead Man CD, Euphoria dropped into my lap. Admittedly, I didn’t quite know what to make of it at first, but after repeated listens, I was addicted, hooked, as if my brain synapses had just wrapped around the finest bud of Maui Wowie or Acapulco Gold. Now I got Colour Haze’s new CD All warping out of my speakers and I think I’ve died and gone to THC heaven.

Long Germany’s prime purveyors of stoned-out psychedelic rock, Colour Haze dig deep into their resin-lined pockets on this, their ninth album and third for label Elektrohasch Records, brushing the stray leaves and twigs off their instruments, refilling the bong and diving head first into a fuzzed-out, swirling ride of psychedelic stoner bliss. Currently composed of Stephan Koglek on vocals and guitars, Philipp Rastohofer on bass and Manfred Merwald on drums, the band started way back in 1995 with more of a straight forward Black Sabbath inspired sound. But as the current lineup cyrstalized in 1999 they abandoned the heavy riffs for a more freeform exploratory jam sound, bubbling bongs and mushrooms, and they’ve never looked back.

Nor should they. “All,” is a mini-masterpiece of fuzzy riffs, intermittent polyrhythmic drumming, droning bass and swirling, undulating, dancing guitar parts. And by the time the sitar pops in around track 6, “Stars,” you’ll be so heady from the acrid smoke you won’t even care what comes next. Colour Haze sound is similar to Dead Man’s but with some heavier riffing and tighter compositions. Whereas on Euphoria it was going to be anyone’s guess where each song would wander off to, even All's most free form jams maintain a balance of structure, a framework to lead the musicians through the smoke and back home again. 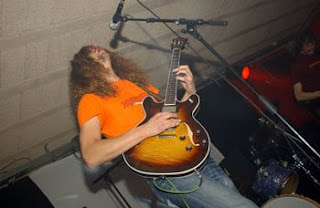 “Silent,” features an insidious riff that worms into the brain like psychoactive bubblegum, riding on the crest of a bubbling bass line. “Turns,” features some beautiful delicate guitar work tripping over the backward masking effects. “If,” brings in shades of the long lost Sabbath influence, actually pounding at you with enough ferocity to make you sit up and take notice. “Moon,” brings in a soulful, quasi-funky riff percolating under the jazz guitar explorations. The title track “All,” clocking in at nearly 15 minutes, is a sonic trip through every chemical induced state known to man. The boys do their best to play with dynamics, near ambient moments intertwined with passages of power and muscle, and throughout it all, while clearly not the focus of the band, Koglek’s vocals are never lacking, adding texture to the spacey vibe. I have absolutely no idea what he's singing about, but really, does it matter?

Amazingly, after this fantastic, nonstop mindwarping freakout, my favorite section of the album is near the end, the killer one-two punch of “Fall,” and “One.” Within this near-15 minute section you’ll find everything from swirling spacey ambience, tightly plucked guitars, jazzy breaks, fuzzed out chords to pulsing down-tuned riffs. The drum work alone left me near speechless, just a gape-mouth mute astonished by what I just heard.

All is an album of undying warmth. An experimental journey through soundscapes of tone and texture. Koglek is an under-rated master of his guitar, loading up on riffs and dropping down to mind-altering solos at the drop of a pick. And somehow, the rhythm sections manages to keep this freaked out train on the tracks.

While, overall there is a certain sameness to the songs, an over riding “don’t bother me, I’m lost in my beanbag chair and not getting up” tone to the album, this is about as urgent and groovy as the neo-psychedelic space bands get. Colour Haze clearly know their hallucinogenics and their instruments, and fortunately for us, knowing one doesn’t preclude the use of the other.

Paul Rhodes said…
hey Paul here, i have found some pretty amazing heavy psychedelic music on this site, it has alot of psych folk too, not sure how you feel about taking ripped vinyl but it's a treasure trove