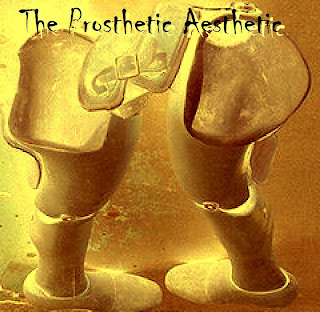 Welcome to the first installment of the Prosthetic Aesthetic, where we’ll feature current and future releases from the indie-metal label, Prosthetic Records. As most of you loyal readers have found, we don’t do a rating system, but rather, use a rich vocabulary to describe the music within any given album. That intention remains the same for this report. Since there is only a limited amount of space to work with, we’re gonna’ try to cram as much info into this report to give all the bands their due (up hill climb for a couple wordy bastards, huh?) And, in common Ripple fashion, we’ll do our darn tootin’ best to convey the sounds, moods, textures, emotions, and overall feel of each of these recordings, just so that you know what you’re getting into. Prosthetic Records doesn’t release “nice” music, but they do release music from artists who seem to care a great deal about their craft . . . as dark and menacing as that may be. 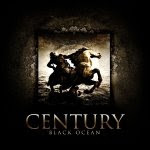 So, let’s get started with the third album from Century, entitled Black Ocean. I mentioned menacing earlier? Yeah, and how! The moment that the laser hit the reflective shiny surface of this disc, all hell broke loose. Initially, the music reminded me of Streetcleaner-era Godflesh, but that eventually evaporated into something akin to some sort of death metal/hardcore amalgamated mass. The manic rhythms create a wall of noise, which the other instruments work overtime to pierce. But, once they do, the guitars create these meandering lines of melody that are somewhat infectious. The lyric “And soon our scars become the ornaments that define us” from the lead track, “Pantheon,” gave me pause for reflection about humanities animalist behaviors and the ideas that a civilized people, such as ourselves, still prey on the weak. And those are just the physical scars, don’t get me started on the emotional. There’s definitely more to Century than one listen gives you.

“Equus” has some nifty guitar work running through it. It’s these textures that will keep you coming back for further listens. The jazzy break towards the end of the tune adds a nice touch of tension as the listener is lulled to some complacency before being pummeled again. Also, keep an ear out for the sprawling guitar line amidst the hopelessness of “Rising Sun.” “Monolith” is a tune that features the most variety on the album. Melodic, clean toned guitars encompass greater areas of space, and the musical breaks are more frequent. This is by far the most intriguing piece of music on the disc and shows Century pushing with all of the formidable weight against the walls of the genre that has them boxed in.

The previously mentioned wall of noise makes Black Ocean immensely heavy and, at times, suffocating. When the musical breaks happen, they are welcome moments of variety that allow the music (and listener) to breathe. At one point during the title track, the visual of being weighted down and sinking through the ocean depths played like a movie to my mind’s eye. File this one under deep and heavy. 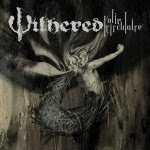 Continuing with the wall of noise theme, we have Folie Circulaire from the Atlanta based outfit, Withered. This disc varies from ambient, droning guitars that deconstruct the senses, to black/death metal tinged rhythms that crush those same senses to microscopic particles. Unrelenting and uncompromising, Withered hoist a hearty middle finger to the reality that most of us hold dear and infuse their own definition of the term into their music. Sheer chaotic rhythms are split into pieces by melody lines performed by guitarists Chris Freeman and Mike Thompson, which add a shade of light to the otherwise overwhelming volume of darkness. Not for the weak of heart, Folie Circulaire is a dense depiction of despair and despondency. No . . . this was not brought to you by the letter D. Musically, it reminds me of Isis on meth with it’s droning tones, but that’s where the comparisons end. The rest is dark and heavy, and contains smooth tempo shifts to keep things interesting. 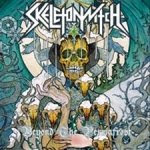 The best way that I can think to describe Skeletonwitch’s Beyond the Permafrost is to imagine, for just a moment, Leif Ericson and his Viking hoards preparing for a day of pillaging by listening to the finest NWOBHM albums. Skeletonwitch shift from balls out speed to mid tempo thrash inspired passages, all with the thrilling guitar harmonies reminiscent of early Iron Maiden. Take a listen to “Within My Blood” and hear how dark and creepy Iron Maiden could have been. Vocalist Chance Garnette does an amazing job of mixing his death metal growl with his black metal screeches, the guitar tandem of Nate Garnette and Scott Hedrick are about as keyed together as any of the great metal duos, and the drum work from Derrick Nau isn’t just into the speed thing as he shows moments of technical brilliance and follows the musical ebbs and flows. There are no “pretty” parts on this disc as the boys have decided that the best approach to conveying their message of destruction and the dark side of the cross is to just spit it out. The Witch does indeed stand before us now. 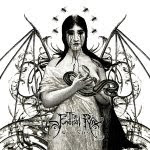 The Funeral Pyre come at you hard and strong with a blistering disc of black/death metal inspired ditties. To call Wounds extreme is to call ice cold. It’s so openly obvious that these guys are expelling their message in the most attention getting fashion available. The music is a double bass drum melee, vocally screeched frenzy that punctuates the bands dissatisfaction with the world around it. Like most of the music reported here, it does feature some interesting melody work to break the monotony and sheer volume of the chaos. The lyric that caught my attention here is on “The Gathering Bones” with the poignantly stated, “Watch as the architecture falls, crumbling on the wealth of the old.” There’s a lot that you can take from that . . . ya’ just gotta’ think about it for a minute or two. 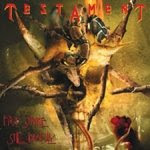 The last album that we’re bringing attention to is a re-issue of Testament’s First Strike Still Deadly. What more can really be said? It’s Testament, and they re-recorded choice cuts from their first two albums (The Legacy, The New Order.) This was particularly interesting for me since I hadn’t listened to either of those albums in what feels like a century and a half, so hearing them recorded with modern gear and technology made the tunes sound fresh, vital, and immediate. Oh, and having that wily six string slayer, Alex Skolnick, back in the fold doesn’t hurt either. So, if you’re like me and somewhat lost interest in Testament around the Souls of Black era, First Strike Still Deadly should bring back memories of when thrash metal was the most important musical force on the earth.

Skeleton Witch "Upon The Wings of Black"

Posted by The Ripple Effect at 1:34 AM

Ok, Testament. I love Testament. I stayed with them even through some of their "homogenized" period of sound. This album needs to be viewed contexually insofar as Testament was no longer a titan when this was conceived or later released. Therefore, boo! I have the albums; I don't need this. Rerecording/remastering is fairly overrated in my humblest of humbles, but this is just another hopeful cash cow. I can't blame them, but I won't indulge them and buy it; that's what stupid friends are for.

Fair enough. I pretty much dismissed the band with "Souls of Black," and listening to this disc kind of took me back to a time when things were a bit more simple. I thought the overall performances on this disc were darker and more foreboding, hence my favor of "First Strike Still Deadly." Personally, I think this is a great way for people who aren't all that familiar with the band, yet who are interested, to get into their earlier stuff without breaking the bank.

As always, thanks for the comments. You always make the discussions interesting! =)

Alex Skolnick is always worth breaking the bank for! It's too bad he's not as present on the new album. Hopefully that will change. Formation Of Damnation is still very much an Eric Peterson work.

I totally agree. Souls of Black was a dismal wanker. You really should check out Low, though. Not the Testament of old, but it's still good.