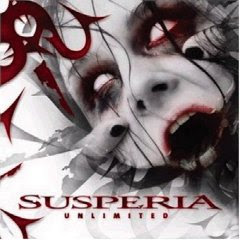 The first time that I heard Susperia was one of those moments where time kind of stopped. I stood in the middle of my living room, dripping wet mop in my hand, and stared befuddled at my television. There may have been some drool . . . I can neither confirm, nor deny that accusation. You see . . . I had tuned in to one those music channels so that I had something interesting to accompany me while I did some house work. I’ve since found that having those channels on is not the most conducive mode for working in an efficient manner. I’m an easily distracted lad and, much like pretty lights dancing around the head of an infant, intriguing music can distract me from the most important of tasks. Simply put, you wouldn’t want me performing surgery on you while there was music playing . . . otherwise, I may remove something that need not be removed. That . . . and I have no medical training in the least bit.
So, some years later, I picked up Unlimited and gave it a spin. Initially, I was impressed with the virtuosity of the musicians, but then realized that this disc had something else to offer. There’s a groove to it. There’s a melody in there. I suddenly realized that this isn’t at all what I had expected. “Chemistry” opens with some guitar noodling, but quickly shifts to an all out thrash metal pummeling. The vocals are gruff, but not the traditional “cookie monster” growl that has become so prevalent in the metal genre. The voice is strong enough to carry a melody through the chorus, but doesn’t lose that great metal intensity. “The Coming Past” will have the head rocking up and down due to the great riff work, killer breakdowns, and the steady drum work.
I was expecting more of a black metal / death metal vibe from Susperia, mainly because they’re album art is so creepy. But, once the needle hit the record . . . .er, laser hit the disc, I realized that these guys had more in common with Testament and some of the Bay area thrashers of the late 80’s than they did with Old Man’s Child or Mayhem. Listening to “Situational Awareness” takes me back to those days when the riffs would start and stop at such break neck speed that you couldn’t help but fall out of your chair as you grooved along with the rhythm. “Devil May Care” sees the band adding additional female vocal harmonies, which give the song just what it needs to be different from the rest of the pack. The guitar work at the solo is stellar!
“Years of Infinity” is a double bass drum, swirling guitar lick, head banging thrill ride! The vocals are so in your face that you can practically feel the spittle pelting you from the speakers, and just as you’re ready to wipe down, the vocals switch to a more melodic vein. And then to top things off, vocalist Athera channels his inner Rob Halford and screams the tune to a close. “Home Sweet Hell” is the standout track with it’s melodic guitar work, break neck tempo, and urgent vocal lines through the verses. Again, it’s the chorus melody that separates this song from being a run of the mill metal track. Absolutely brilliant work and a tune that I’ve often found myself humming through the course of a tedious day.

“Mind Apart” and “Beast By Design” begin closing out the disc with more unadulterated metal madness. Great break at the 1:21 mark of “Beast”, and in case you’re not sure what the Bay area thrash sound is, refer to this moment. It pretty much epitomizes the genre. By the time “Untouched” comes to an end, you’ll find that the whole musical experience only lasted for a little more than forty-five minutes! Kind of reminds me of Slayer’s Reign in Blood in that regard. Relatively short, to the point, concise. If only I could learn to write a review that way! I know . . . then The Ripple Effect would lose some of it’s charm. - Pope JTE

Posted by The Ripple Effect at 4:44 AM