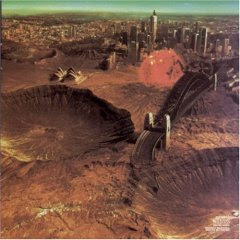 There comes a moment for every great band when it all comes together. A creative peak matched perfectly with a cultural zeitgeist. The resulting magic launches the band into a new stratosphere of performance and success. For U2, that moment was The Joshua Tree, an amalgam building on the dynamism of War and the atmospherics of The Unforgettable Fire.

For Midnight Oil, that moment was Red Sails in the Sunset.

While it was their next album Diesel and Dust that would rightfully be the one to break them in America, it was Red Sails that finally saw the band come together, shedding the pub/punk rock surf roots displayed on their first albums and adding the political urgency that blasted off of 10, 9, 8, 7, 6, 5, 4, 3, 2, 1. Listening to this album, there is no way to describe it other than epic.

Uncompromising in its political intensity and defiant Australianism, Midnight Oil roared out of the gates, protests marches carefully wrapped and packaged as they launched into a nonstop rant against nuclear proliferation, the plight of the aborigines, consumer greed and the corporate ethical vacuum. “When the Generals Talk,” starts off as a slight musical misdirection as to what the rest of the album hid inside. Behind a near-funky break beat, punctuated with spasms of Moginie’s guitar, Peter Garrett warns that “When the Generals talk/you better listen to him,” which takes on new meaning when it becomes apparent that the Generals he’s most afraid of are more likely General Motors, General Electric, and General Insurance than a military force.

“Best of Both Worlds,” immediately follows, raging from the stereo before the first track can even finish. Driven by a pulsing bass and as crunching a riff as Midnight Oil would write, guitars screech behind Garrett’s pleading warning that, “The real world is not as calm as it appears to be from here/The small world is not as strong and the testing ground is near.” Fierce and unrelenting in its intensity, the guitar wails through its solo, while the backing riff bellows underneath.

Then, just as the intensity reaches the breaking point, it all comes crashing back down. Following a fiercely strummed acoustic guitar, a foreshadowing of their excellent use of acoustics on Diesel and Dust, “Sleep,” portrays vividly the human rights abuses of the aborigines that truly are universal. “In the back of the cell/the plug and the cord/shoulder dislocation/bruised in isolation.” Garrett’s vocals never before achieved such a perfect blend of passion, melody and urgency. “Minutes to Midnight,” which follows reigns as perhaps the best anti-nuclear song written, “I.C.B.M.’s, S.S. 20’s, they lie so dormant, they got so many,” sung over a single acoustic guitar and protest drum beat.

As perfectly crafted as the prior songs have been, with a stunningly flawless melding of acoustic and electric instruments, never losing their punch and urgency even on the slower passages, it is “Jimmy Sharman’s Boxers,” that is the emotional core of the album. Telling the true tale of aboriginal men who were unceremoniously paraded across the country where white settlers would bet on them as they battled against fighting kangaroos. The song starts as a slow funeral dirge and with each stanza a new instrument, acoustic or electric guitar is added, until Hirst’s drumming rages like a war drum, the guitars screaming underneath Garrett’s wailing vocal, “Why are we fighting for this? Why are you paying for this? You pay to see me fall like shrapnel to the floor/ What is the reason for this? There is a reason for this? What is the reason they keep coming back for more?”

It is this unflinching honesty and unrelenting brutality of lyric combined with the beautiful playing and melodies of the right band at the exact right moment in time that propels Red Sails to levels never heard by them before. Other tracks like the Oil’s classic “Kosciusko,” and “Helps Me Helps You,” continue this amazingly high standard of craft. Acoustic guitars, strummed with passion, create more dynamic tension than most metal bands could create with a roomful of electric strats and an arsenal of effect pedals. When Garrett sings about the plight of the aboriginals on “Kosciusko,” “No stranger to hostility/Now they want to be somewhere else/No stranger to brutality/Now they want to be someone else,” you can’t help but feel the pain of the people who he’s lent his voice to and the passion with which the band brings that message forth.

Diesel and Dust may have been the moment that broke the band, but it was Red Sails in the Sunset that made the band.

Posted by The Ripple Effect at 8:00 PM