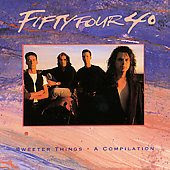 It’s raining this morning, the droplets pouring down from a thick shroud of grey layering over the hills. I’ve already brewed a fresh pot of coffee, got a muffin and have no desire to go outside. It’s a good day to just plop down on the couch with my steaming mug and let the day pass me by. But what to listen to? It’s not a downbeat, chill frame of mind. I still want to rock, but nothing that will make my ears bleed or break my mood. Jazz is too, well, jazzy. I want something not downcast, not melancholy, just . . . somber.

It’s not normal that I’d throw a Greatest Hits CD at you for review, but with a band like 54-40, when you’re trying to catch up on a career that spans 25 years, this is a great place to start. Nearly legendary in , 54-40 burst onto the scene with a rootsy, earnest sound that immediately labeled them the Canadian R.E.M. While there is some similarity in their sound, especially in their early albums, one listen to this compilation culled from their first five releases immediately lets you know how much of a disservice that label is.

Considering that they come from , with it’s grey chill and wet winters, it should be no surprise that 54-40 bring a touch of the overcast northwest to their music. “I Go Blind,” is probably 54-40’s best known song south of the Canadian border, and that’s mainly on the back of the Hootie and the Blowfish cover. But whereas when Hootie sings, “In the morning/I get up/and I try to feel alive/but I can’t,” it seems more like he’s complaining about a post-frat party hangover, than the existential angst expressed in Neil Osbourne’s slightly nasal baritone. That’s not to say that 54-40 is a downer. They’re definitely more uplifting than say, the American Music Club. They’re just. . . somber.

“Baby Ran,” is a jaunty breakup tune with an infectious chorus. Watch the video at the bottom of this review and see for yourself if you’re not singing “Baby ran/she ran away/why she ran?/I’ve got to say/I’m lonesome/all the time,” for the rest of the day. The chorus works it's way into your consciousness. And the rest of the album follows suit. Whether the percussive riff of, “One Day in Your Life,” or the anti-apathy chant of “One Gun,” 54-40 know how to create a mood, textured with the rare mournful trumpet bellowing behind the jangling guitars.

54-40 long dispatched with the R.E.M comparisons, but unfortunately, never found a home here in the And it’s too bad. “Alcohol Heart,” “Miss You,” and “Me Island,” are as rewarding as any of the best output, or early Matchbox 20. So, the next time you're hanging on a rainy day, break out Sweeter Things, and revel in the misty somberness of north of the border rock.