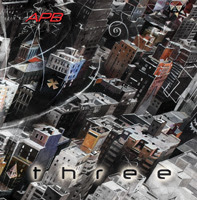 The last few years have seen been an embarrassment of riches for the apb fan, with the successfully reissued Something to Believe In followed by the excellent live Radio 1 Sessions, the BBC Recordings. But still, after a gap of 21 years, no fan could be faulted for wondering which apb were going to show up on the new CD Three; the smoothly-produced white boy soul of Cure for the Blues, or the earlier boisterous funk rockers of Something to Believe In. The guys in apb, however, never leave us guessing. Skipping over both periods of the band's history, they dip farther into their past, digging deep into their early funk Buzzcockian punk roots. Eschewing the pop-synth of Cure for the Blues, "Ghost of My Love," roars out of the speakers, all spastic guitars and looping bass lines, an immediate successor to their early-classic "Shoot You Down." I'm sorry, but no band that hasn't played together in two decades has the right to sound this urgent. Gone is the wide-eyed optimism of "Palace Filled with Love," replaced with the bitterly sardonic, "I can't wait for the day to come, when the ghost of my love is finally gone." Whatever happened in the years since their last release, a happy love life clearly wasn't one of them. As an opener, it's a stunner.

From there, the boys never let up. "Free Again," locks in a punk funk groove with more urgency than anything heard from the recent spate of eighties revivalists. "Love by the Seasons," throws the listener a curveball, dipping into the band's artpunk aspirations a la Wire or Pere Ubu, while "Yawn" dips into a beastially heavy Buzzcocks riff for the chorus, bursting through Glenn Roberts's jerky guitar fills.

And just when you begin to miss the looser free-for-all funk of "Danceablity," the boys come raging back with "Drag," finding Iain Slater's slap-happy fingers dancing across the frets in a scattered flurry. Then, just when you think the guys have reached their zenith, "Bad Tempered Spinster," boils out of the speakers, locking into a groove that could make Shriekback wish they were next in the reformation line. "Less" blasts out, another angular Wire-esque art punk montage, before "Shock You," races off to the finish line. George Cheyne's drumming is never more urgent, bashing though Slater's slap bass and keeping the boys locked into another full-out funk boiler until "Choose Your Exit" rips you back to another Buzzcocks pop-punk workout. And at this point, as you're fighting to catch your breath, sweat dripping off the end of your nose, there are still five songs left, climaxing with the full-on funk punk of "House of the Living Dead." The final two songs are unnecessary, afterthoughts to the aural frenzy that you've just witnessed.

With a fuller production than Something to Believe In, filling in the spaces that at times made that collection of singles seem a bit thin, Three ranks as the most satisfying apb listening experience so far. Immediate and riveting, more than anything else, this sounds like the music of a bunch of guys having fun. They bring to the front everything that made apb so amazing in the first place, locking into the spastic funk punk grooves that inspired a countless number of followers, such as the Chili Peppers. With the apb boys all entering their 40's now (my guess) they have no right to sound this aggressive, this much on top of their game. But they do. Thank God, they do. --Racer X.

Posted by The Ripple Effect at 4:27 AM