apb - Something to Believe In 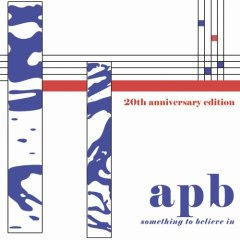 apb is your average white three piece new wave Scottish funk band, and if that sounds like a mouthful of contradictions, then you'll understand why they're so damn good. Fueled by the manic bass playing of singer Iain Slater, apb rips through their new wave funk with enough rock enthusiasm and energy to make up for whatever shortcomings they may have. Each of their songs are laden with bass thumping riffs, accentuated by spastic guitar clashes and Slater's truly Scottish vocals. Fortunately, the majority of apb's songs hit their mark, finding that danceable funk/punk groove in early '80's new wave.
"Something to Believe In collects all of apb's import only 12 inch singles on such record labels as Oily Records and Red River Records. It also throws into the mix 6 unreleased gems that serve as a roadmap towards charting the bands development.
apb started out as an average Buzzcocks wantabee. Songs like "Chain Reaction" and "Power Crisis" roar with stolen riffs and lyrics, giving a pleasant early eighties muted punk sound, but certainly one that would never have gone anywhere. The band plodded along this course until 1982, when Iain Slater evidently realized two things. Number one: girls like to dance more than they like to mosh and, number two: damn it, he can play that bass. These two realizations led to "Shoot You Down", an explosive new wave tinged funk boiler, driven by Slater's pulsing bass that awakened the band to their true calling. "Palace Filled With Love" followed next and paved the way for the steady stream of pop savvy, funk rockers to come.
Lyrically, apb ranges from the insipid to the mundane, expressing wide-eyed innocent love infatuation of the early eighties. Listening to these guys, you get the impression that they were a group of Scottish lads, getting loaded in a pub, when they realized that the only people who ever got laid in their hometown were the musicians. With motivation firmly in hand, they formed a band, but then it dawned on them that they had absolutely nothing to say. Fortunately, they didn't let that minor inconvenience interfere with their grand plans, and instead ,they picked up their instruments and began to play. And man, could they play.
The soul of apb is Slater's bass playing, which borderlines on phenom status. He pounds, picks and slaps out lead bass lines that propel apb's best work through the stratosphere. Guitar is relegated to the role of rhythm keeper in the best of these releases, laying down tone and mood around which Slater weaves his bass masterpieces. Slater thumps through his songs with such complicated, overlying bass lines that you wonder how his fingers remain attached to his hands at all times. Slater's real talent however, was his ability to weave these monstrous bass lines into extremely catchy, melodic pop numbers.
"Rainy Day", "Palace Filled With Love", "One Day", and "What Kind Of Girl" all roar with Slater's bass and melodic genius, culminating in his grand epic de funk, "Danceability, parts 1 and 2" a mind-staggering explosion of slapping bass, polyrhythms, stuttering guitar fills and Slater's earnest pleading to get a little pussy. Early eighties music just doesn't get much better than this.
That period between 1982 and 1985 represented apb's halcyon period, as soon after the band expanded to a five piece, adding synths and percussion and occasionally female backing vocals. Buoyed by their early success, they set out to conquer a larger market, tuning their sound to the more popular British electrofunk of Heaven 17, Human League, and Duran Duran ,which were making inroads on the American charts. The addition of keyboards filled out the band's sound, making them more pop friendly, but also overwhelmed the space Slater needed for his bass and subsequently, he fell back into a more standard bass role. "Something to Believe in" and "Is the Music Loud Enough for You," are examples of this later phase of apb's existence that served to enhance their pop credibility and led to their signing with Link Records for their first full-length studio album, Cure for the Blues. These are buoyant, upbeat, pop-laden, hook filled tunes that on their own right would stand up as fine '80's pop, but remain a minor disappointment compared to the less structured free-for-all funk abandon of their earlier work.
apb's music is a timeless funk blend that doesn't sound dated despite the demise of new wave over 15 years ago. They ignored the trendier fads of punk and electronica and opted for some straight ahead funk, bass driven rock and roll. Perhaps Slater summed it up the best in "Danceability," all he's trying to do is make his rhymes make some sense and not get stuck in the days pretense.

--Racer X
Find the review of their newest album here.

Buy here: Something to Believe In