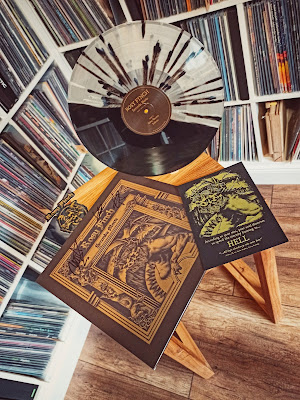 On their new EP, the trio from Spain deals with the classic poem "The Divine Comedy", the main work of the Italian poet Dante Alighieri (1265-1321) that tells the purification of a sensitive, often melancholy narrator through the three realms of the world beyond - through Hell (Inferno), Purgatory (Purgatorio) and Paradise (Paradiso).

So the EP is also divided into these 3, but starts with the acoustic intro Selva Oscura (4:59) (Dark Jungle).  The song is calm with a dark and haunting atmosphere. As if something lurks in the shadows, waiting to appear. Dante's first steps into the unknown and the beginning of his journey are magnificently set to music here.

The song leads almost seamlessly into "Inferno" (7:45).  Here the acoustic guitars are quickly replaced by heavy sludge and doom.

The trio perfectly masters the change between quiet moments that bring you calmer and brute riffing that crashes down on you like gigantic waves. 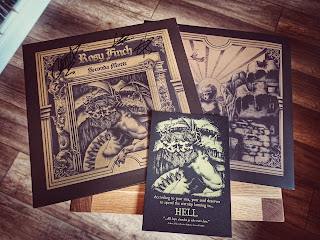 After a short psychedelic interlude in the middle with gently reverberating vocals, the song really revs up again with screaming sludge vocals and a grave-deep & crushing heavy groove.

Purgatorio (5:06), the third song shows again the quieter moments I just talked about. More post-rock with top notch guitar work towards the end (early Soundgarden flair) and Mireia once again shows how incredibly varied her voice is.  The song totally takes you away!

The last and longest Track "Paradiso" (9:54) is reminiscent of the intro right from the start.  Calm, atmospheric, slightly psychedelic and then becomes the most varied of the EP.  This is where progressive post-rock meets psychedelic sounds, shoegaze, grunge, stoner doom and sludge. The EP sets the journey through hell to music perfectly.  You can practically feel the maelstrom that - despite occasional glimpses of light - pulls you further and further into the abyss.

A very cool gimmick in the vinyl version are the randomly distributed cards "According to your Sins, May your pure Soul rest in..." Hell, Purgatory or Heaven.