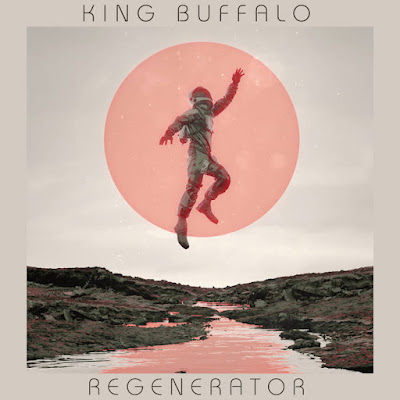 Rising from the Ashes of Velvet Elvis in 2013 and hailing from Rochester New York, King Buffalo (Sean McVey - Guitar/Vocals, Dan Reynolds – Bass/Keyboards, Scott Donaldson – Drums/Vocals) is as retro as it comes. I am not referring to their wardrobe or their music (although this contains the best elements of Classic Rock) No I refer to their work ethic. They do it old school. Putting out a steady body of work and get in a van and tour, tour, tour. With Supports to Uncle Acid and The Deadbeats, Clutch, and appearances at Psycho Las Vegas, Freak Valley and The London, Berlin, and New York Desert Fests. And lots, lots more King Buffalo is the epitome of a band chipping away at the coal face and the power of word of mouth. They have been developing their sound slowly evolving from straight ahead psych band into something much more eclectic and interesting.

Their ambitious plan to put out three interconnected albums in 2021 may have gone a bit awry. The Burden of Restlessness dropped in June and Acheron (recorded and filmed live in Howe Caverns, New York) at the start of December. Both Albums made best album of the year’s lists. Fast forward to September 2022 and the third album Regenerator finally arrives. Was it worth the wait? 1000% YES!!!

Starting with the title track, this is King Buffalo turning the amps way up for an odyssey of rock-solid drums and driving bass while it moves between chilled and brilliant guitar hero worthy solos from McVey. His crystal-clear vocals give it a hypnotic feel. The secret weapon King Buffalo have is the appearance of being laid back which belies how hard the band are hitting. They know how to use dynamics and step of the distortion pedal so when they let loose it feels so much more substantial than smashing your ears in constantly.

Second track “Mercury” sums this approach up and is a perfect description of the band. Constantly shifting and very hard to pin down. There are of course the elements of classic rock in their music but also the driving rhythm of and repetition of Krautrock and the somber moods of Radiohead. The most chilled moment comes halfway through with “Intermission” which is exactly that. “Mammoth” then resumes the album with an epic tale of hunting on the back of the hairy ancestors of elephants. The song will be superb live building to a conclusion and solo that screams for a lighter (or Mobile/Cell phones) in the air moment.

No stranger to long songs, King Buffalo either by accident or design have developed a signature sound that has them standing head and shoulders above most of their peers. Starting slow and building lairs on to a song till it is fit to burst with the tension and then opening the dam and releasing an ocean of riffs and solos. They do so again on final track “Firmament”. Bookending the album with two almost ten-minute tracks creates a musical spiral and had me spinning it from the start almost immediately again.

If this is the finish to their three-album trilogy, then it a fantastic one. Heavier and unbelievable as it is even more focused than the previous two. Without doubt this will repeat the trend and land on most of the best albums of the year lists (and if there is any justice hog the number one spot).

King Buffalo are musical ninjas. Understated and quietly going about their business. You won’t see them coming but they will have slayed you before you even know what’s happened.

Regenerator is nothing short of Perfection!