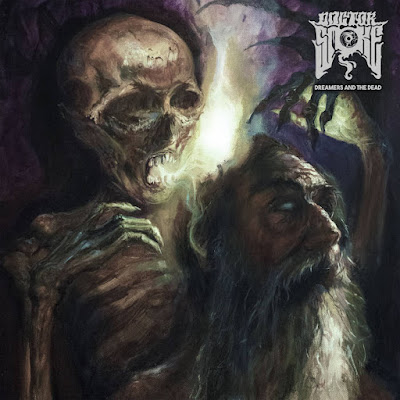 I’d heard this Ohio-based band actually described as stoner/doom and saw them reviewed on the Doom Charts. The name fit, and not being exactly enamored with this style of recent times due to it’s dissolution into “samey-ness,” I approached with caution. However, Todd & The Pope are known in these quarters to bring the best & certainly not to paint themselves into a corner so I pushed “play.” I was very pleased and even a bit more surprised than I’d expected with what I heard.

You see, to these ears, this 2nd album by DOCTOR SMOKE has nothing to do with anything stoner or doom. And, as Tony McPhee would say, “Thank Christ for...” that!!! Sure, this quartet is heavy but with big accent on the “metal.” From the opening of “Reborn Into Darkness,” it’s pretty damn obvious this ain’t no Sab-worship platter. The guitar sound is kinda semi-polished late 80’s early 90’s “Jackson into a Marshall” complete with the occasional harmonic squawk. The vocals are mid-range, sometimes harmonized and float on extremely catchy melodies, not unlike those used by GHOST.

Riff-wise, DOCTOR SMOKE seem to take a step back a little further into a more aggressive NWOBHM fare. This provides a really nice backdrop a more-than-fair-share of axe soloing. A great example of this is from about 2:20 in the fourth track “Out Of Time.” I have to say when I heard the whammy bar flick part way through, my nostalgia for seeing an old friend of mine working over his “frankenstrat” in a local dive came to the fore.

But let’s not get caught up in just the lead guitar work here, in spite of how cool it is. The thing that stands out the most to me with DOCTOR SMOKE is the songs and their ear worm quotient. Whether it’s the stop-start verse of “The Rope,” the slow swing of “This Hallowed Ground” or “What Lies Beyond,” with it’s Maiden-like threatening crawl, there’s a consistency. That consistency is melodies that will be in your head for hours after spinning the disc and it’s an ante that’s raised by vocals that buoy them nicely. Couple that with a production that simply sounds great (no over-rattling bass nor chalk-board highs), you’ve got a real winner here.

Forget the genre darlings of the day and all the witch-weed-mountain-bong bands. DOCTOR SMOKE has made a killer METAL album for all dreamers, the dead and most of all...you.