“You're Boring is about the one-uppers, the self absorbed narcissists, and the soul suckers. We are very excited for this to be the third and final single for the album!"

Become Like They Are is the staggering new album from the heavy quintet, HORNED WOLF. Initially forming in Lawrence KS in 2015, Become Like They Are marks the next chapter for the outfit as this is the first record with new vocalist Sav. Unleash the beast and become immersed in an enthralling sound.

Drawing inspiration from the likes of IN FLAMES to KATE BUSH, and ALICE IN CHAINS to LORNA SHORE, and BLACK SABBATH, to name a few, the band seamless fuse multiple styles into each track. Opening with "You're Boring", the track effortlessly flows from an upbeat, punk-edged beginning, to arrive at a dramatic breakdown, before entering a doom-esque slower section. Descending further into the gloom, "Bloodlines" is a raucous blast of doom, sludge and fuzz. Elevating the guitar tones and introducing the demonic, guttural harsh vocals, HORNED WOLF delicately lure their audience into the dark side. The title track, "Become Like They Are", packs an epic punch with driving rhythms, powerful harsh vocals and soaring cleans. Concluding with "Every Creature's Luck Runs Dry (Doom Forever)", HORNED WOLF unveil a fury of raw power, emotion and immense intensity. Profound and haunting with a mournful undertone, it will leave you craving more. 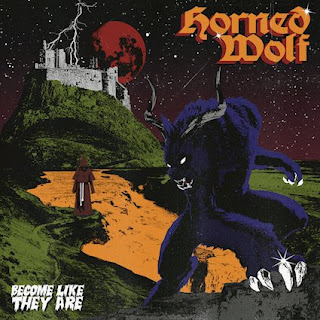 HORNED WOLF have produced a thrilling extravaganza of dynamic and genre-crossing heavy sounds. Simultaneously pushing boundaries and sharing a positive message of inclusivity through their music, the act are a force to be reckoned with.