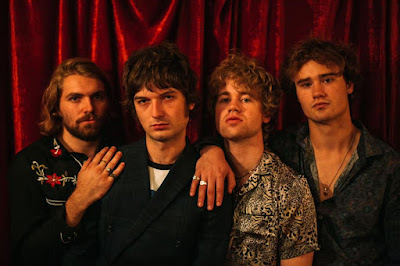 We have them all the time, it's what makes us feel alive and keep doing what we're doing. My first one was probably my Grandad teaching me how to play Wildthing by The Troggs. Those 3 chords have stuck with me since, never needed anything else. Around the same time I got the first Arctic Monkeys CD for my 10th birthday and listened to it on repeat, not knowing what the fuck they were singing about but making up my own meanings to each song. Then a few years later when we started finding out about all the local bands in Falmouth and listening to their demos on the way to college. That was the moment that Dan and I realised that all you need to be in a band is a few songs and a few pairs of sunglasses, it's really fucking easy. From there we formed a band and it's taken over our lives.

Everyone starts differently. Normally the melody comes first and once we confirm that we haven't ripped it off someone then we get the lyrics together and start playing it with the band.

On the new album we really wanted to make the music that we would have loved when we were 15, loud and exciting! So we took inspiration from great guitar bands of the 70's and 2000's. Blondie, Talking Heads, The Strokes, Franz Ferdinand etc etc. Holiday in My Head is a bit of a bad example but the rest of the album is danceable, a new territory for us as we're used to mosh pits.

Everywhere, Nowhere.. When we're making good music it's very easy to keep making good music and to keep developing the sound forwards. It's when we hit a creative slump that we have to actively seek inspiration. But for the moment inspiration seems to be coming to us rather than us searching too hard!

Well where we all met and went to school was St Austell town and where we wrote most of the album was Falmouth. Though only an hours drive apart they're two very different places. I'd say that Falmouth brings the hope to the music and St Austell brings the dread to the lyrics!

The Beatles track happiness is a warm gun. We were playing Boardmasters festival and needed a name on the poster. The Velvet Hands was the best of a bad bunch.

Holiday In My Head by The Velvet Hands of course.

We have far too many to share. My personal favourite is playing a 'do it for the money' festival in Cornwall. Dan obviously didn't get the memo and wore the most outrageous leather trousers a man has ever seen, only to be greeted by children doing knee slides and the strong smell of cow shit as we walked on stage. 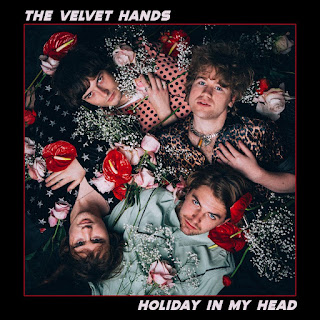 Watching/ playing a velv hands gig is a lovely hour of chaos. We did a tour straight after lockdown and I'm not sure who was more excited, us or the crowd. If you're planning on coming to one of our gigs make sure you don't mind getting sweaty.

Something that can take you somewhere like a film. Doesn't matter whether that place is an american freeway in the sun or a camden boozer in the rain. If you listen to a song and it takes you somewhere I always think it's done its job right.

The Eagles greatest hits album for the £££.

I still love the title track on our debut Party's Over. It's not the best piece of music that we put out but for some 17 year old kids to come up with it it's pretty impressive imo! It also holds amazing memories of hanging out, no responsibility, loving life.

Digital, easyyy and cheap isn't it. Do love vinyl though of course, I am in an indie band after all.

Beer because you can drink more of it!

There's a great one in Truro Cornwall called Music Nostalgia which contrary to the name gets great new releases in. 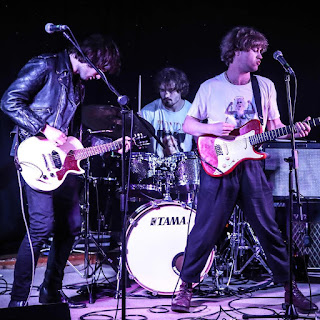 We're doing a few gigs in the South West and London to celebrate the release of our new single Holiday In My Head, a few festivals this summer and then putting out an album that we're all incredibly proud of!