“So.... This is the first song on side 2 of the new album Hate Speech. I don't know if anyone noticed this but, we have built a system that rewards sociopathic behaviour and crushes people for being honest, free thinking individuals. In fact it seems to be designed so that all the positions of leadership are filled by sociopaths. Then just to make it real warm and loving, the sociopaths hire jock bullies to push us all around. Surely we can come up with something better than this.”

The Dayglo Abortions have been a working band since their inception in 1980. There have been some lineup changes over the years but since the cretin, Spud, and Jesus Bonehead started playing punk rock basement gigs in their late teens, there has been a band called the dayglo abortions, ready to test the moral fibre of society, and shamelessly ridicule bullies and evil doers wherever they rear their ugly heads. Their debut album “out of the womb” was a shock, even for the punkers of the day, and they followed it up with the critically acclaimed sarcastic masterpiece “Feed Us A Fetus”, and then “Here Today, Guano Tomorrow”. The dayglo's (as people who don't like saying abortion call them) have never been a pure punk band. They are actually one of the very first bands to play metal with punk lyrics, and punk with metal riffs, and almost anything else mixed in to keep it interesting. They have influenced many well known bands, and have had their songs covered by Napalm Death, Gwar, Municipal Waste, Deicide, and countless other punk and metal bands. As well as being influential they have also become quite infamous with the people who attempted to censor rock music. In the mid 80's, Their record label at the time (Fringe Product) was charged with possession for the purpose, and manufacturing for the purpose of distributing Obscene Material because of their first three albums. It became a precedent setting case in Canada, and the first time criminal charges had been laid due to the lyrical content of a music group pretty well anywhere. When they finally won their case in Canadian Supreme court, it caused a re-write of a section in Canada's constitution called the Obscenity Act and the creation of the Pornography Act to take it's place. 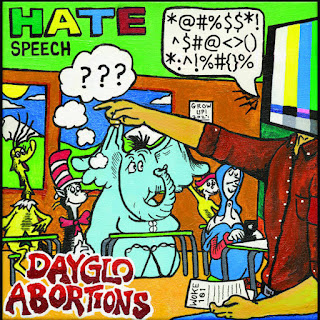 One might think that after over 40 years, and 12 albums, plus uncountable tours around the world, the man behind this weapon of mass creation would either go soft, or at least start fraying at the edges. We all know there is nothing more pathetic and boring than an aging punk band clutching at the tattered remains of their youth. Well Murray (the cretin) Acton has never been a follower of trends and does not suffer mediocrity in any form. The dayglo abortions have consistently increased their skill level and intensity of performance with every release and has refined his ability shock and offend people with his brand of sociopolitical satire. Their latest album “Hate Speech”, just now in the process of being released, once again raises that bar set by pioneers like the Sex Pistols and the Dead Kennedys and does it with the relentless heaviness and razor wit that has become the dayglo abortion's trade mark. And while many others are either too afraid, or too brainwashed, to speak out against the various factions struggling for control in our world, the dayglo abortions cut through it all without compromise and do it in defence of the marginalized people in the shadows of  our cities where the struggle for survival never ends.

While there have been lineup changes in the past, the band has become very stable over the years. They are back to 3 piece power trio with Blind Marc on drums, Matt Fiorito on bass, and Murray (the cretin) Acton on guitar and vocals. The pandemic and it's side effects have been particularly hard on musicians, and life has become more of struggle than ever. The dayglos used the two years that have been taken from us to the best of their abilities. The man who is referred to as “the cretin” recorded mixed and released a solo album entitled “covid-19 nervous breakdown” while in lockdown as well as writing the songs for their up-coming album “Hate Speech”. With their album in the pressing plant, the dayglo abortions now just wait for that green light that tells them the race is back on. Contact info: